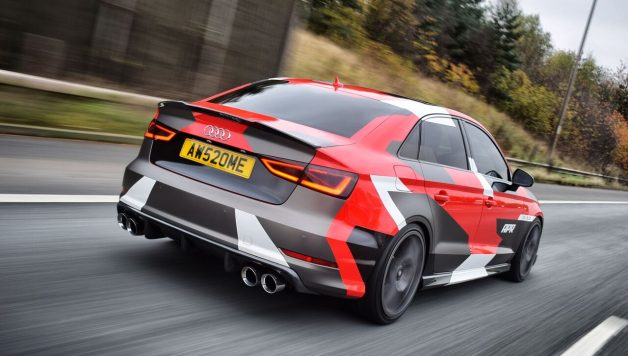 Automotive fashion is a funny and complex thing, and it often seems that there’s little logic in what is and isn’t cool. Want an example of this in action? Well how about the small, hatchback based saloon, a sector of the UK car market that’s recently enjoyed something of a resurgence, yet for many, many years has been in the doldrums. Utter the phrase ‘small saloon’ to folk of a certain age and the cars they’ll almost certainly call to mind could hardly be called automotive greats: the Ford Orion and the Vauxhall Belmont – not exactly a stellar lineup, we’re sure you’ll agree! 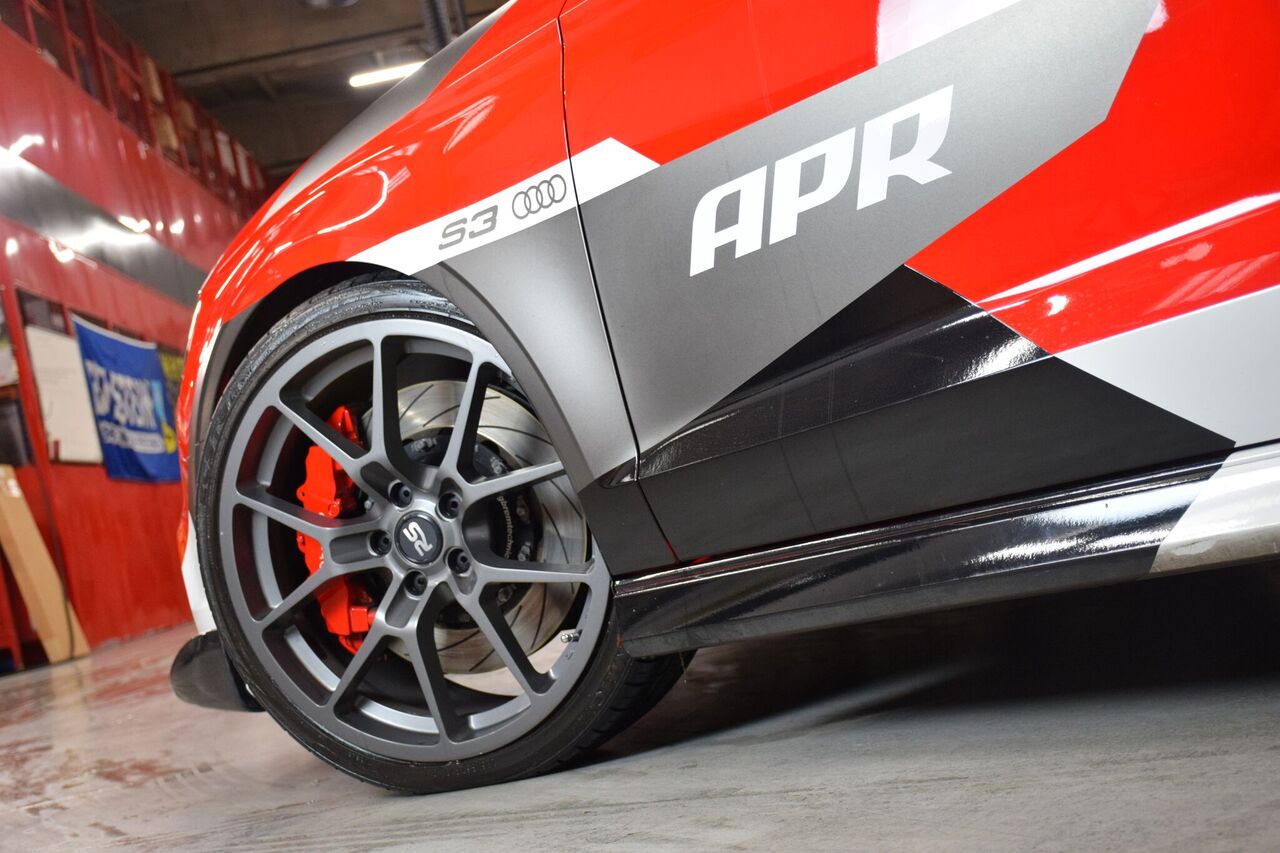 So what’s brought about this sea change, this upswing in popularity? Well, we think credit should lie squarely with Audi, specifically the team that signed off the latest S3 saloon. We think even Audi itself could’ve been forgiven for being ever so slightly taken aback by the overwhelmingly positive reception this variant has had, and there’s little doubt that it’s set to be fixture of the tuning scene for years to come, particularly if the guys at Awesome have anything to do about it. 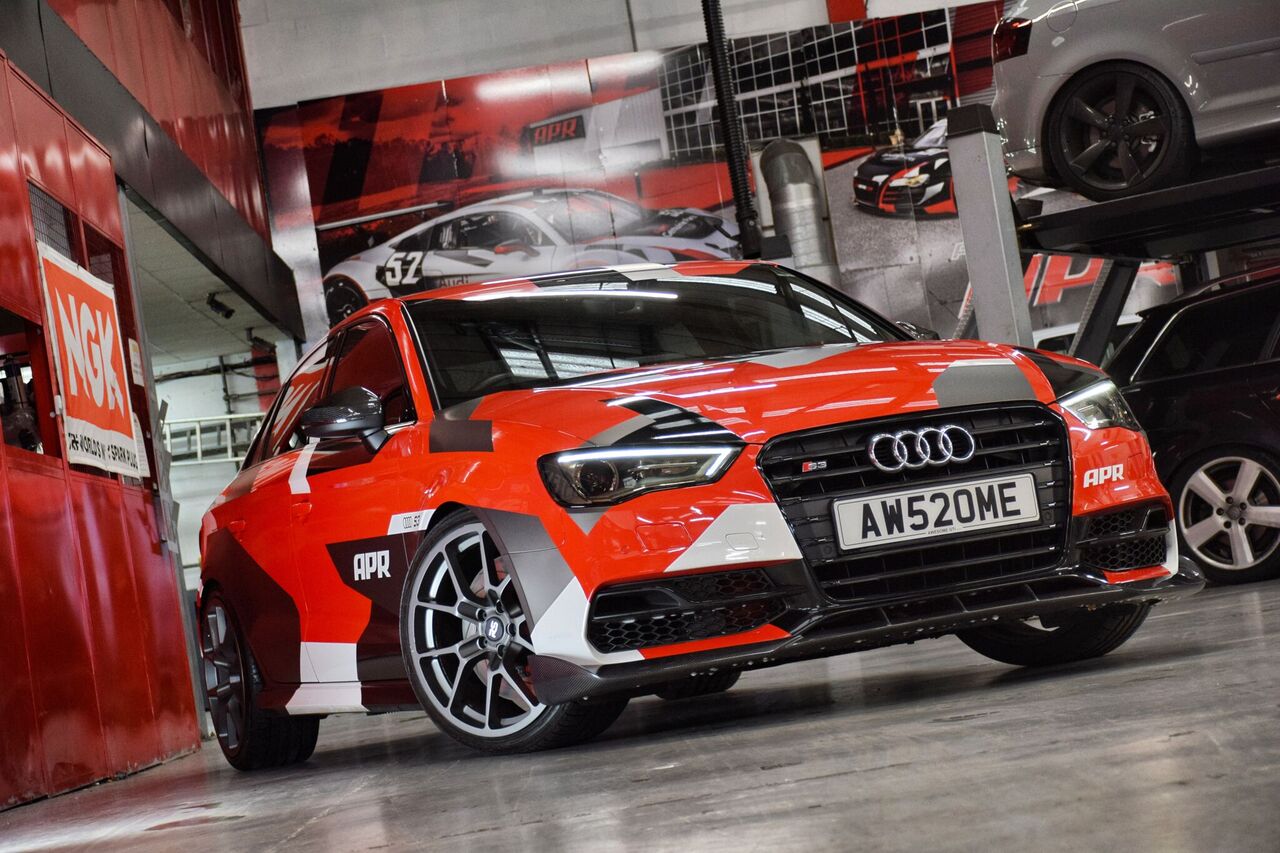 Awesome has been responsible for some of the most notable tuned VW group cars in recent years, so when the Manchester-based VAG gurus selected the new S3 saloon as the basis of their next demo car, well, we knew that the resulting car would be seriously special. 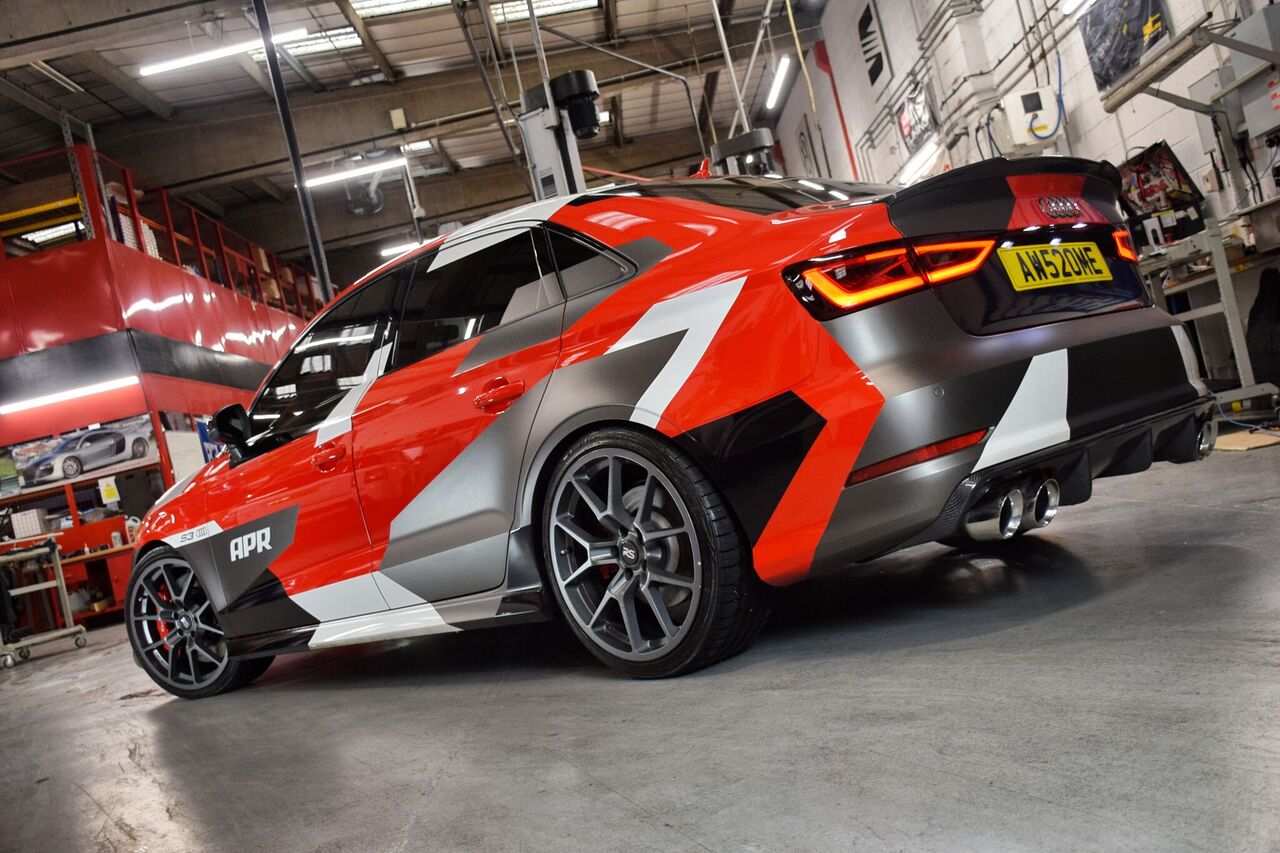 “There were a number of cars under consideration when we opted to take on the S3,” recalls Mark Ash, Awesome’s Director “but I spotted one at APR a few months back and instantly fell in love with it, with the colour and the graphics pack. The decision as to which car we’d buy was made there and then.” 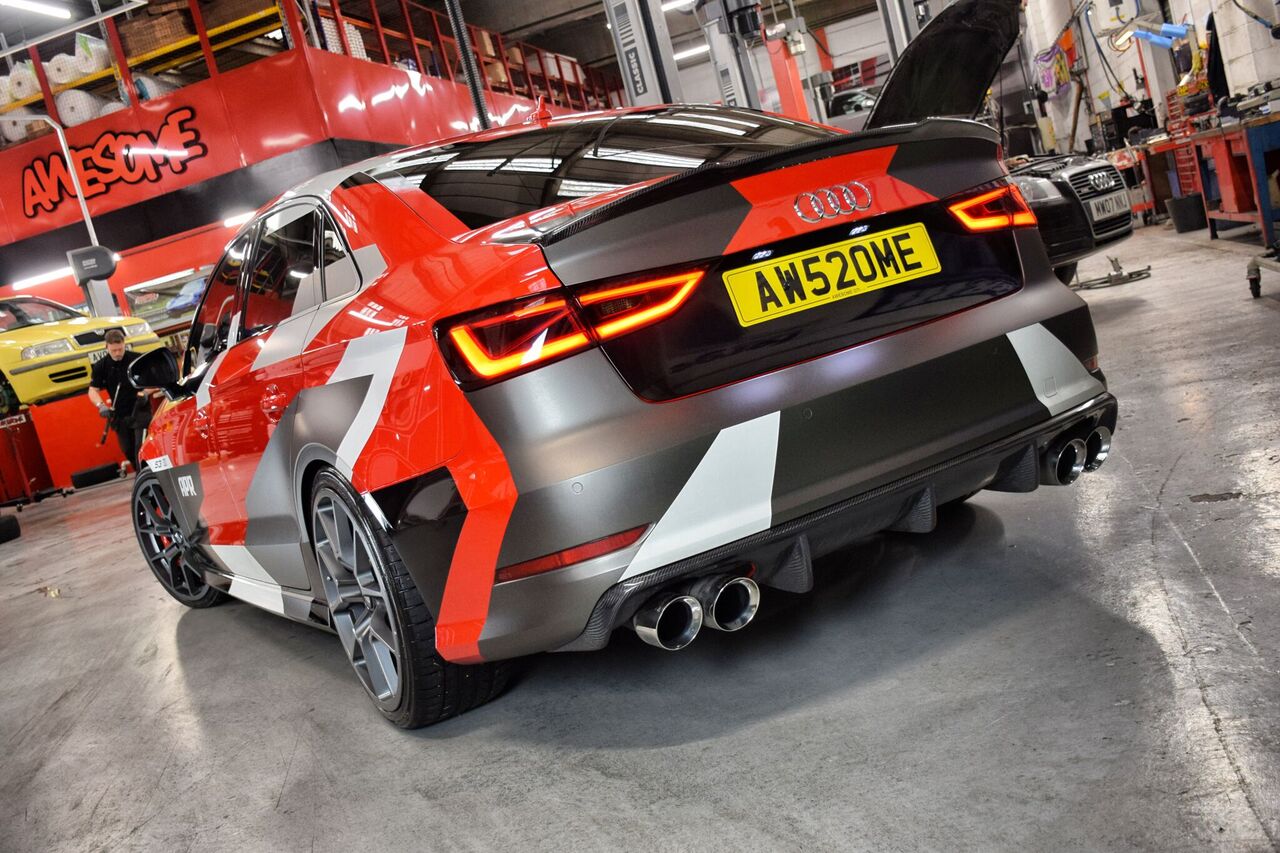 Now it might sound like building a demo car is the simplest thing in the world, particularly for a VW group specialist like Awesome with access to a wealth of aftermarket parts, but this isn’t strictly true. Granted, having ready access to big brake and coilover kits (more on those later) certainly speeds up the build process, but then that’s just the easy bit. No, for a company’s personal car to really earn its keep it needs to push boundaries in terms of tuning, and boy does Awesome’s S3 deliver in this respect. The team started off by buying a brand new S3, then set about voiding its warranty with gusto by drawing up a bespoke Stage 3 kit, one that’s only now approaching the final stages of its development. 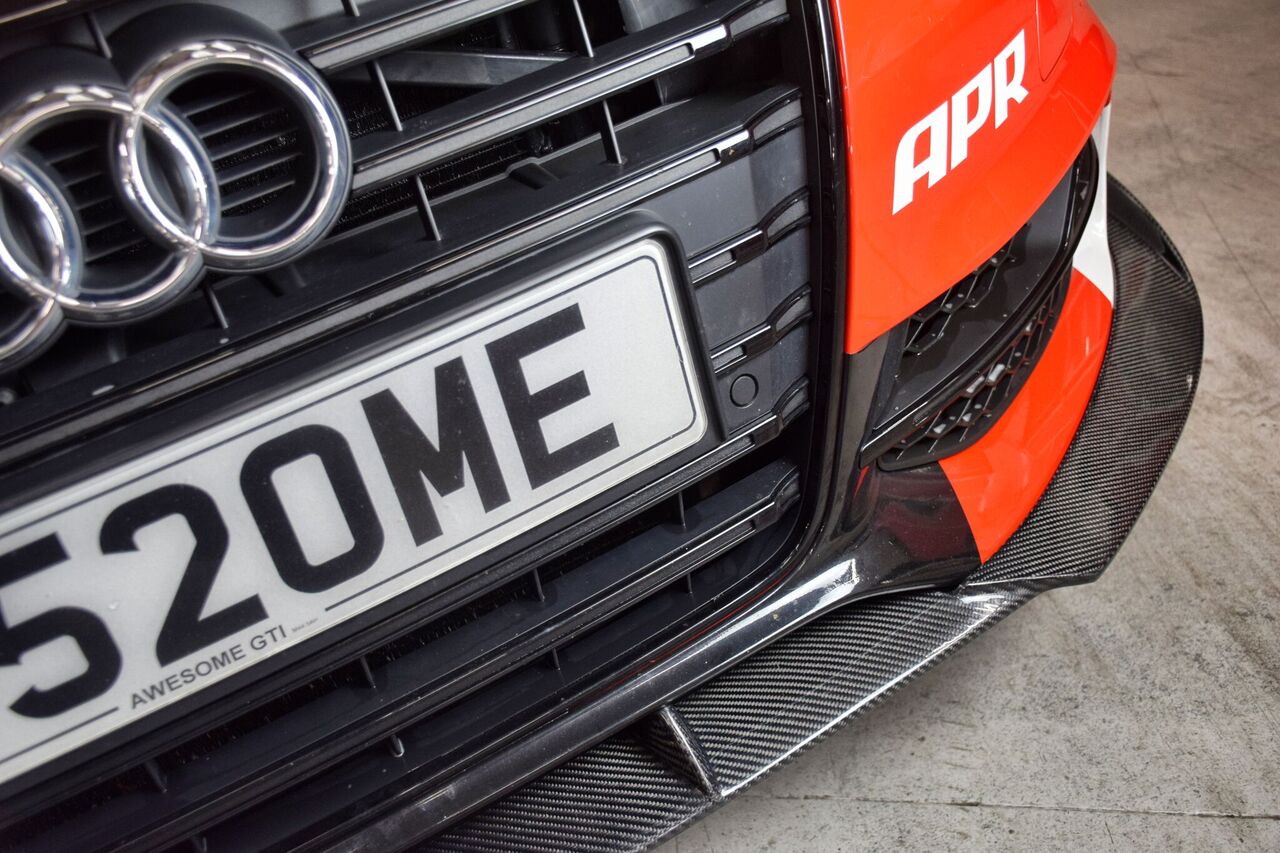 “This build was never about squeezing every last bit of power from the car as that would’ve made it too extreme, too focussed and a far less enjoyable prospect to drive on the road,” explains Mark. “A big part of what we do at Awesome is carrying out balanced, considered tuning, providing kits that up the power and increase the performance in every aspect, yet don’t overly compromise the car in question.” 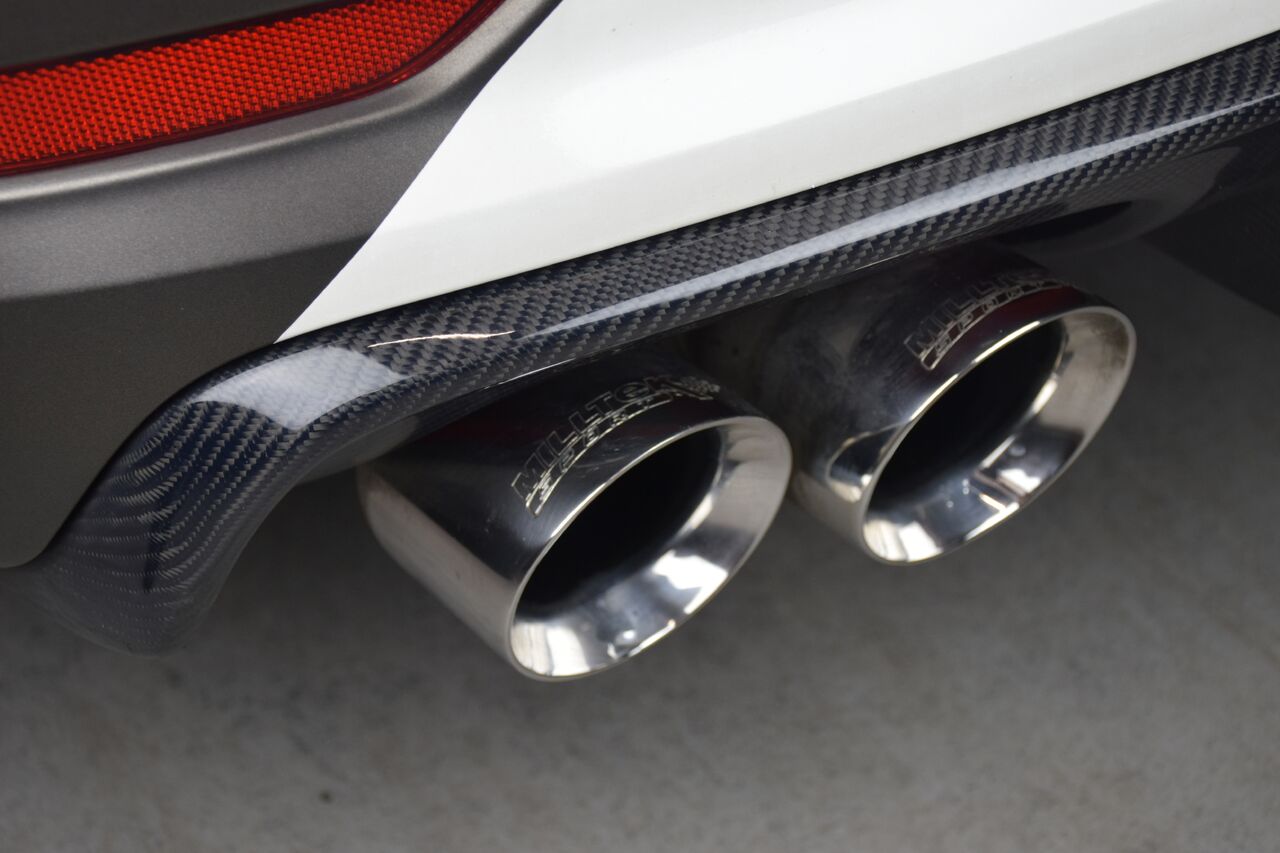 See what we mean when we said demo car building is trickier than it sounds? Awesome’s team were also treading new ground here, hence why they entrusted the tuning aspect to their close friends at APR, a name that should need little introduction to anyone with an interest in fettled Audis. APR have proved instrumental in the successful development of the kit this S3 now sports, one that includes a Stage 3 DSG Tune, ECU Tune, cast downpipe, carbon intake tract, front mounted intercooler with silicone hoses, fuel pump and EFR7163 turbo system. Factor in the other supporting hardware that’s essential for an advanced build of this nature, namely the resonated exhaust from Milltek, and it becomes all too clear why the combined forces of Awesome and APR were required to bring this Stage 3 package to market. 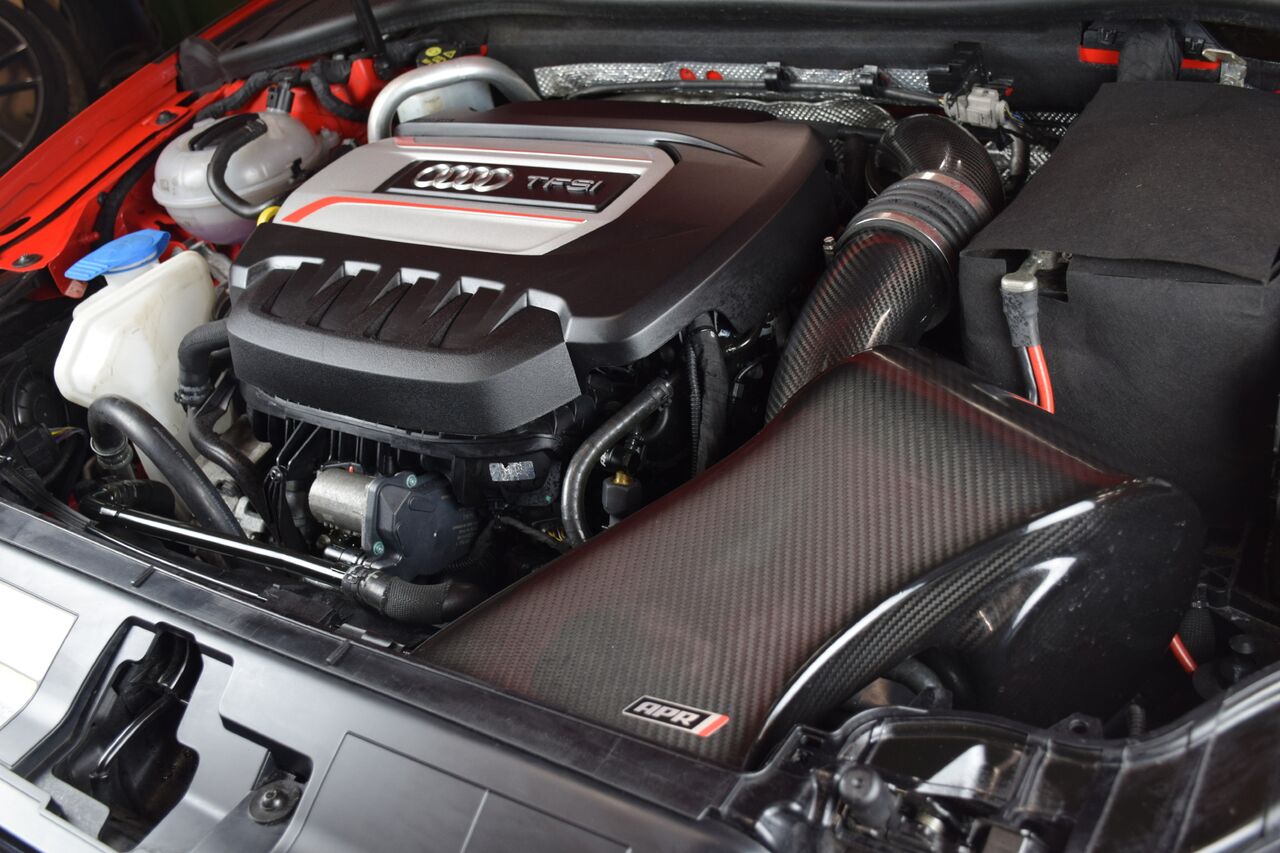 “There were some niggles involved in the development of the kit, true, but nothing more than you’d expect of an advanced package of modifications like this,” Mark explains. “Again, that’s another key aspect of a car like this – we’d much rather bits went wrong during the development process.” 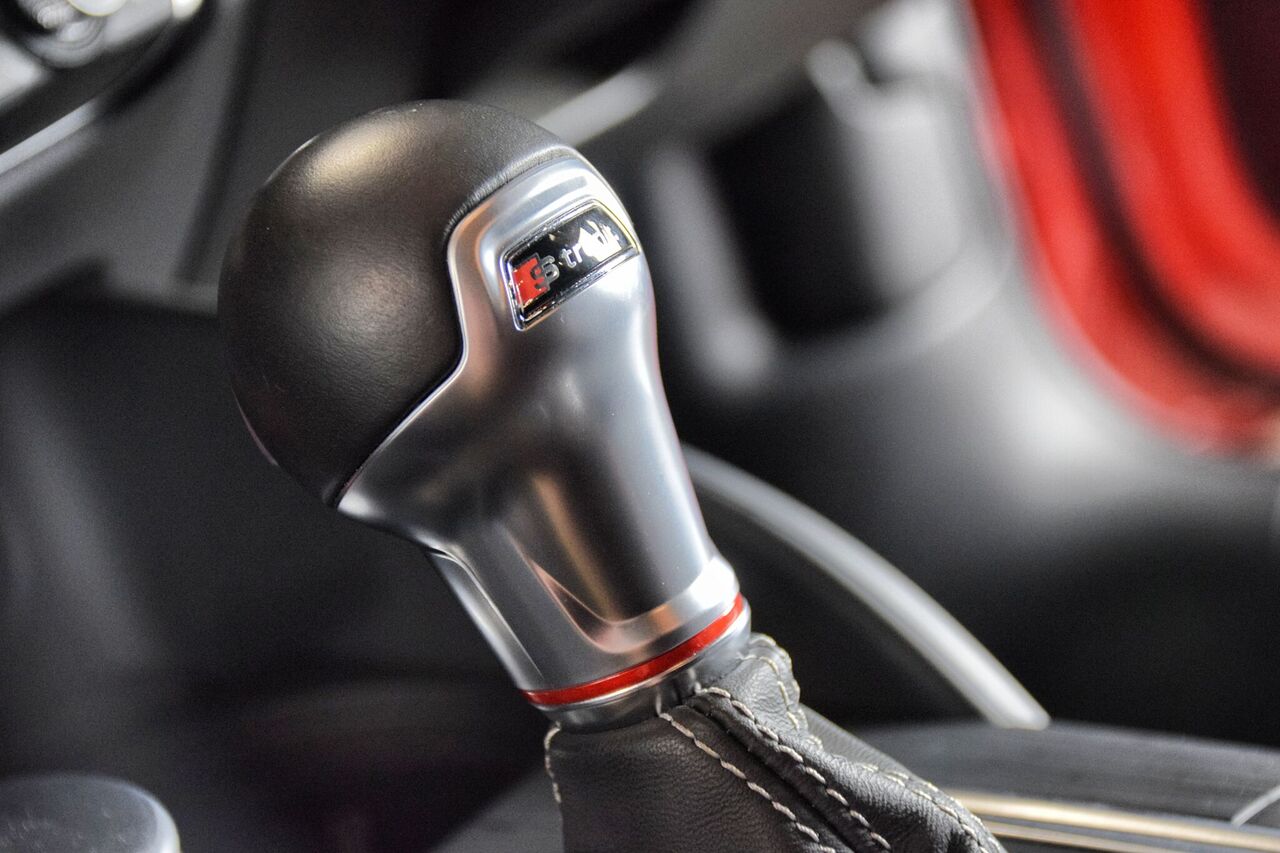 The upshot of all this work and an in-depth development phase? A kit that’s been proven to boost the power generated by the E888 to approximately 500bhp, a massive jump from the stock figure of 306bhp and enough to enable this diminutive saloon to see off any hot hatch you care to mention. 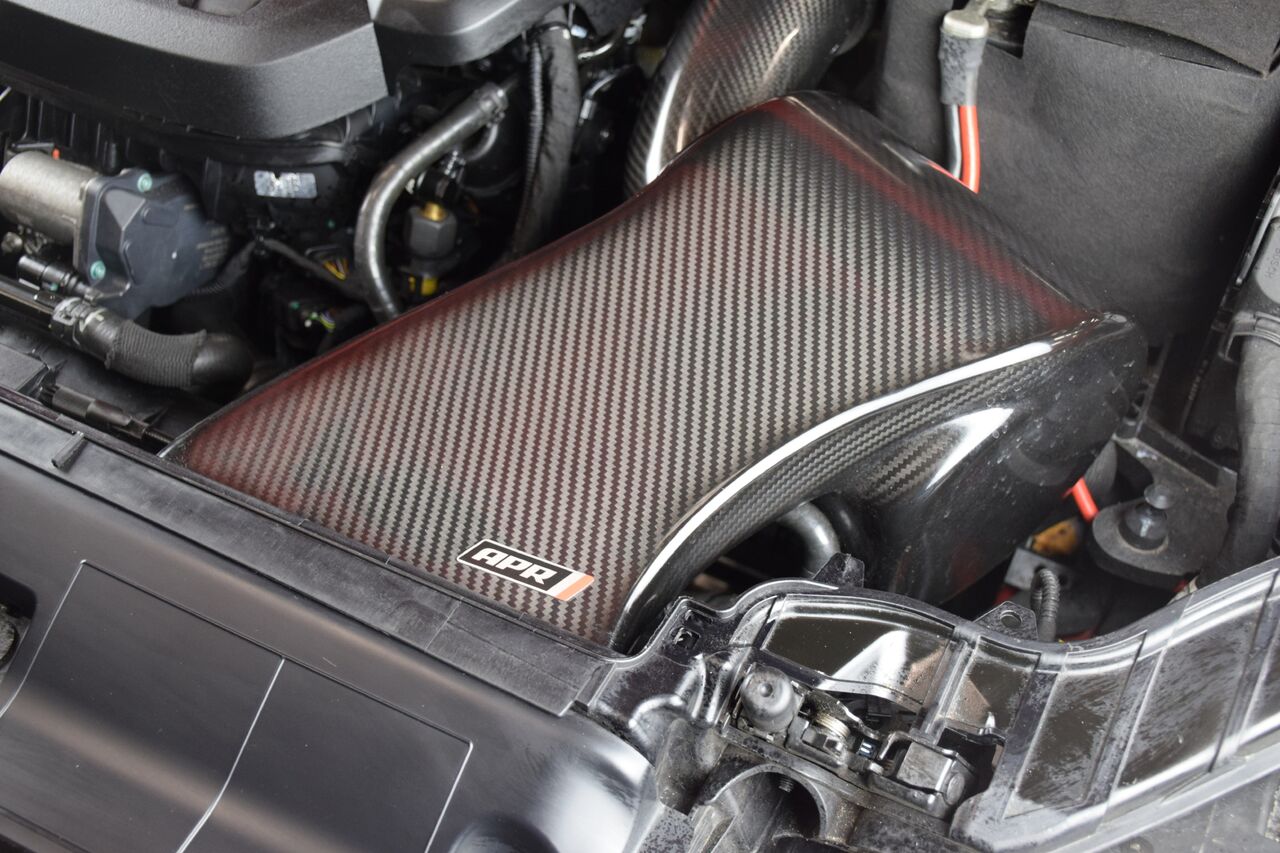 It’s true what they say, power really is nothing without control – yes it’s a cliché, but then cliches have a habit of ringing true most of the time. Of course performance Audi’s and their iconic four-wheel drive drivetrains have always been well equipped in this respect, but that hasn’t prevented the team from Awesome from raiding their parts stash for a selection of uprated transmission goodies, namely a pair of uprated DQ250 DSG clutches. These are essential for enabling the S3 to ladle out its new found power to all four wheels in as even manner as possible, plus the OE hardware would no doubt have started to show the strain after a few hundred miles if left in situ. 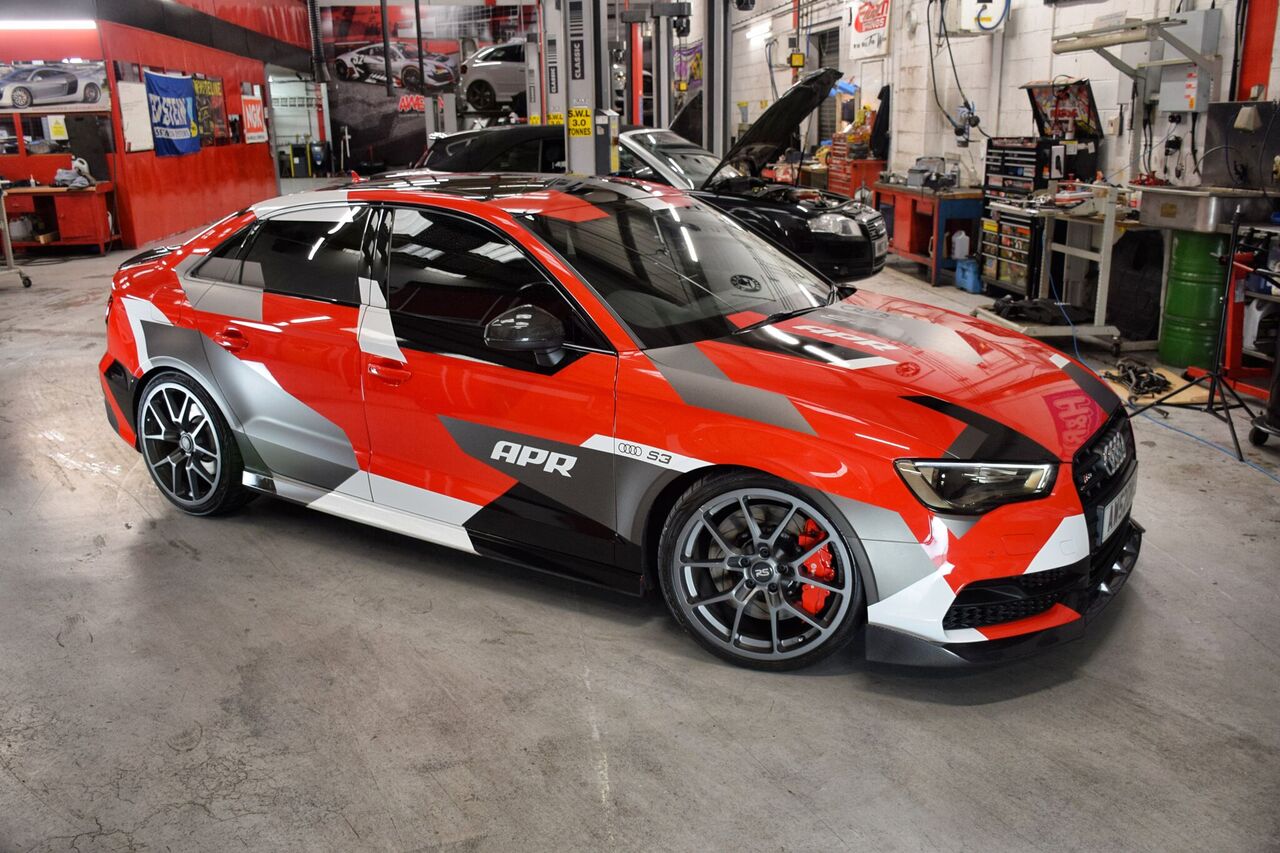 The S3 saloon’s chassis has also been given an overhaul, the stock suspension, wheels and brakes all having made way for far more capable aftermarket offerings from Racingline, Neuspeed and Vagbremtechnic respectively. The latter features a pair of massive 8 piston Brembo calipers originally intended for the Audi R8 and the Lamborghini Gallardo (winning all potential pub boasts at a stroke), a unit selected thanks to its relatively lightweight, capability and piston layout, all highly significant considerations on a 500bhp saloon. These now house Project Mu H16-03 brake pads, the firm’s competition grade offering and one known for its resistance to fade, high initial ‘bite’ and fantastic release characteristics. 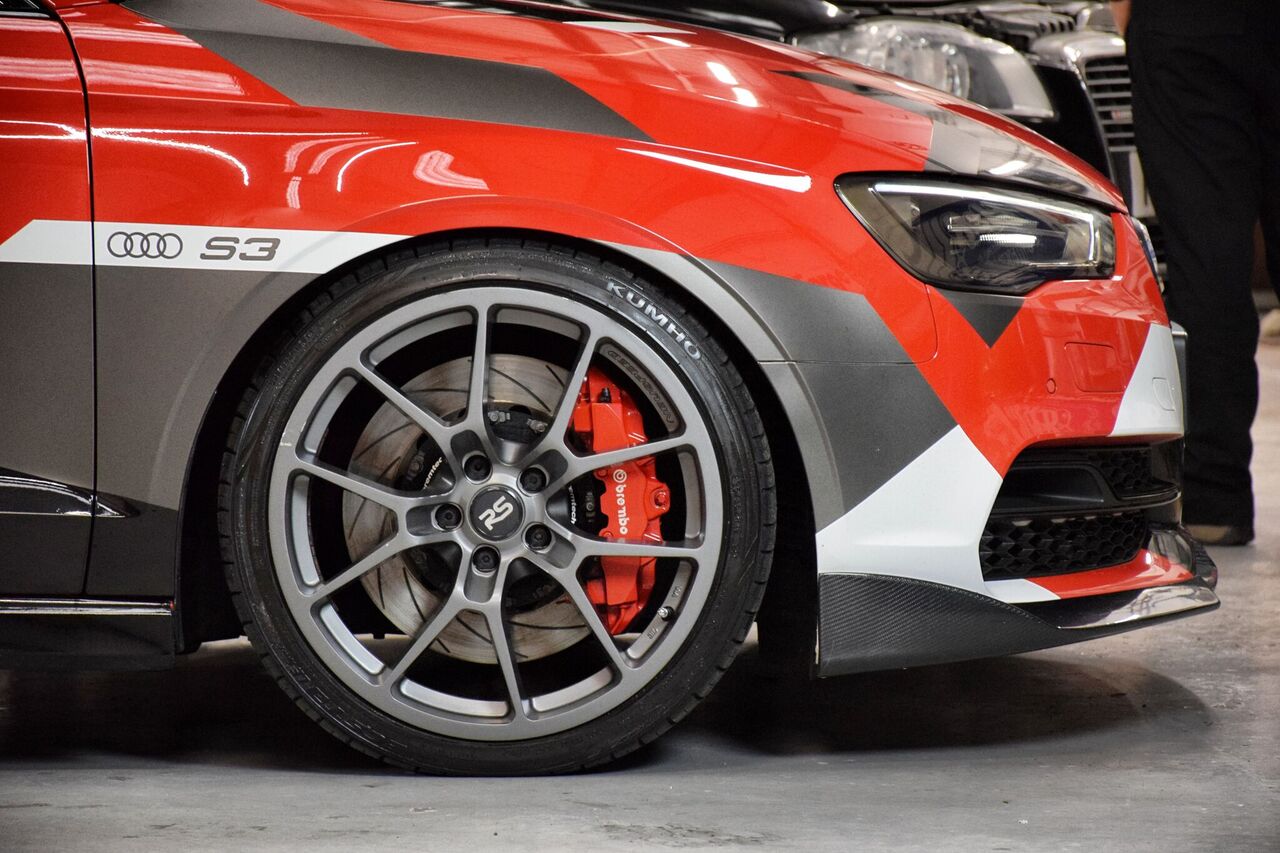 While hardly heavy, the OEM alloys were dumped in favour of featherweight offerings from Neuspeed, the RSE10. Not only do these look right at home peeking out from beneath the S3’s arches, they also tip the scales at just 21.5lb each, and therefore represent a significant reduction in unsprung weight – a true win-win scenario. 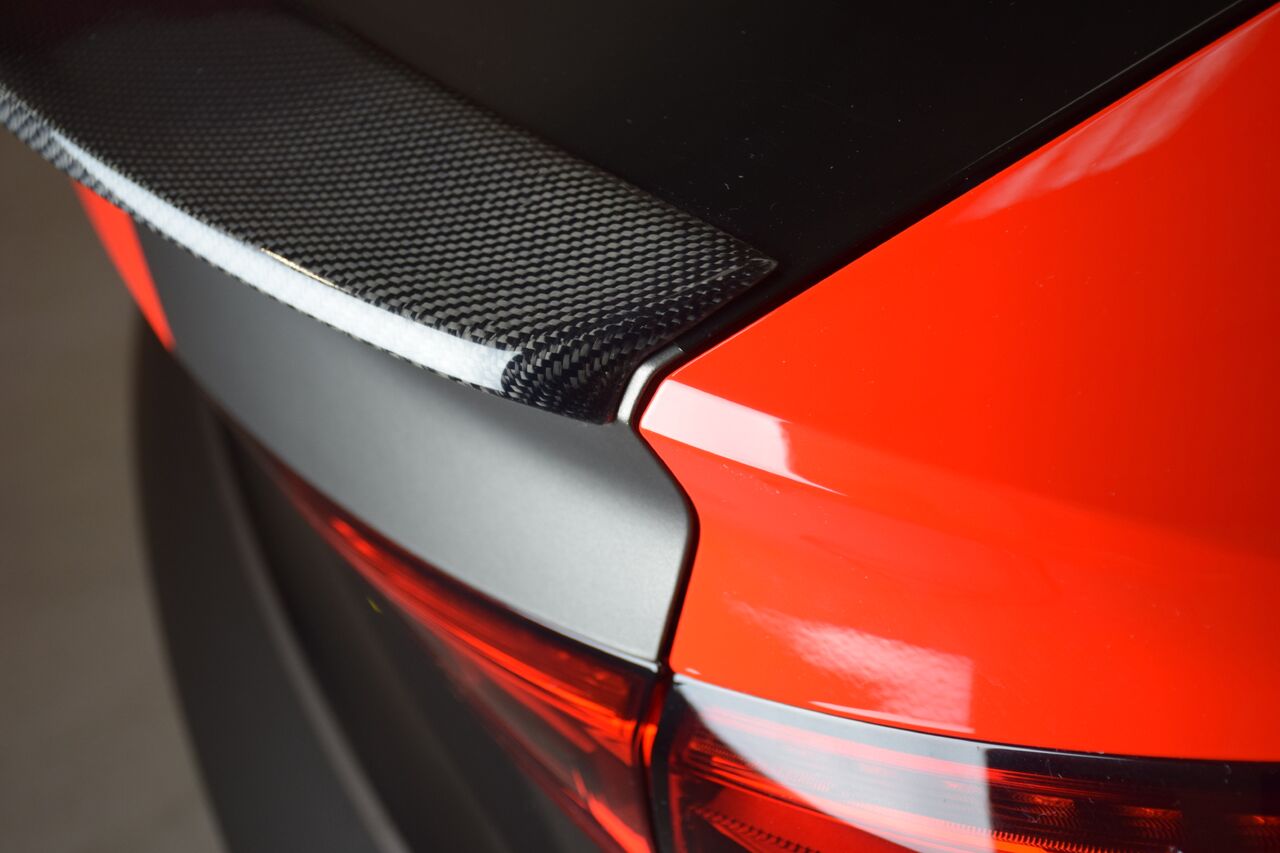 It’s fitting that we conclude this feature by discussing how this particular S3 looks, and that’s best summed up in one word – aggressive. Imagine a pit bull chewing up a wasp while being goaded by an especially foolhardy postman, and you’re still only halfway there! Audi has to take some of the credit for this of course, but it’s hard to deny that the styling work put in by the boys from Awesome has helped lift its looks far and above those of the standard car. 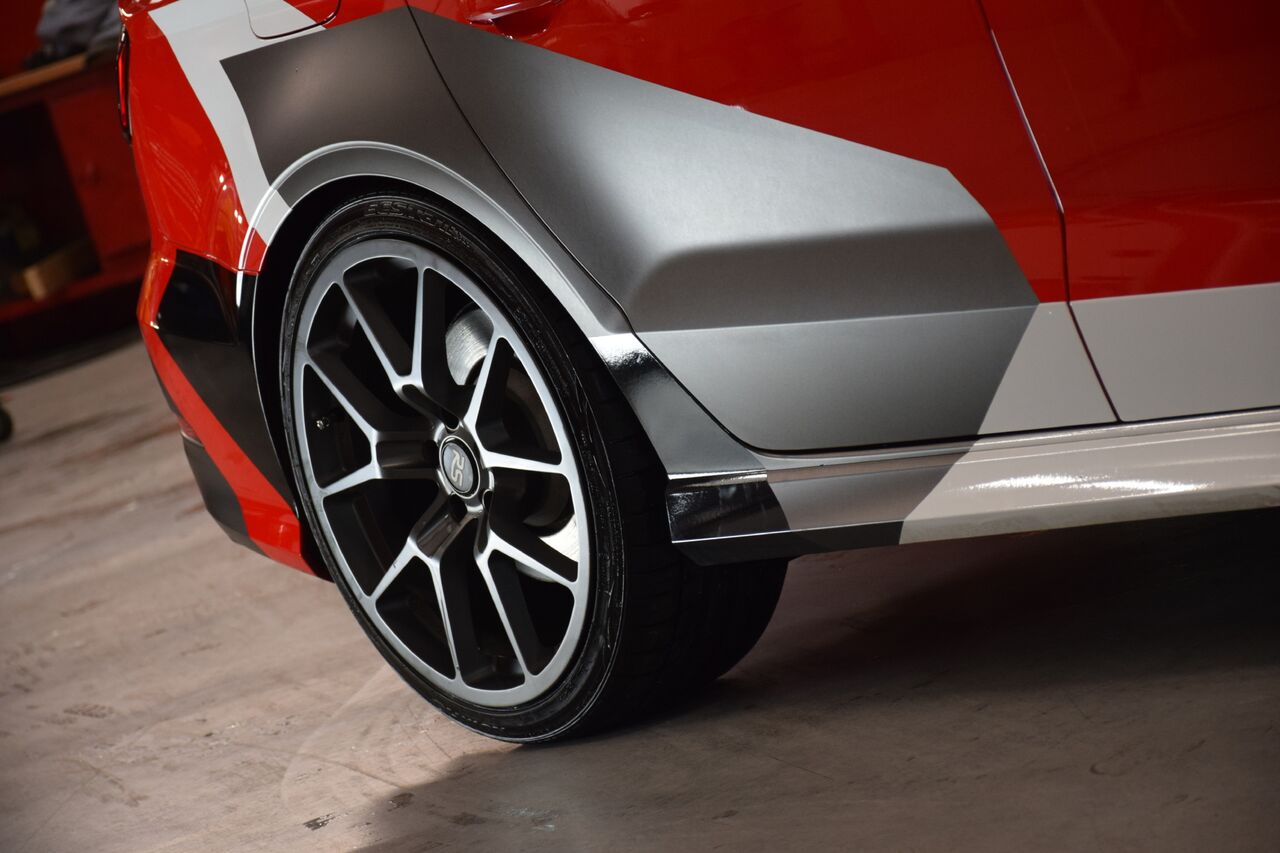 “The graphics package found on the original APR car provided a lot of inspiration, but the livery our car now has is subtly different to APR’s, so it’s more of a homage.” 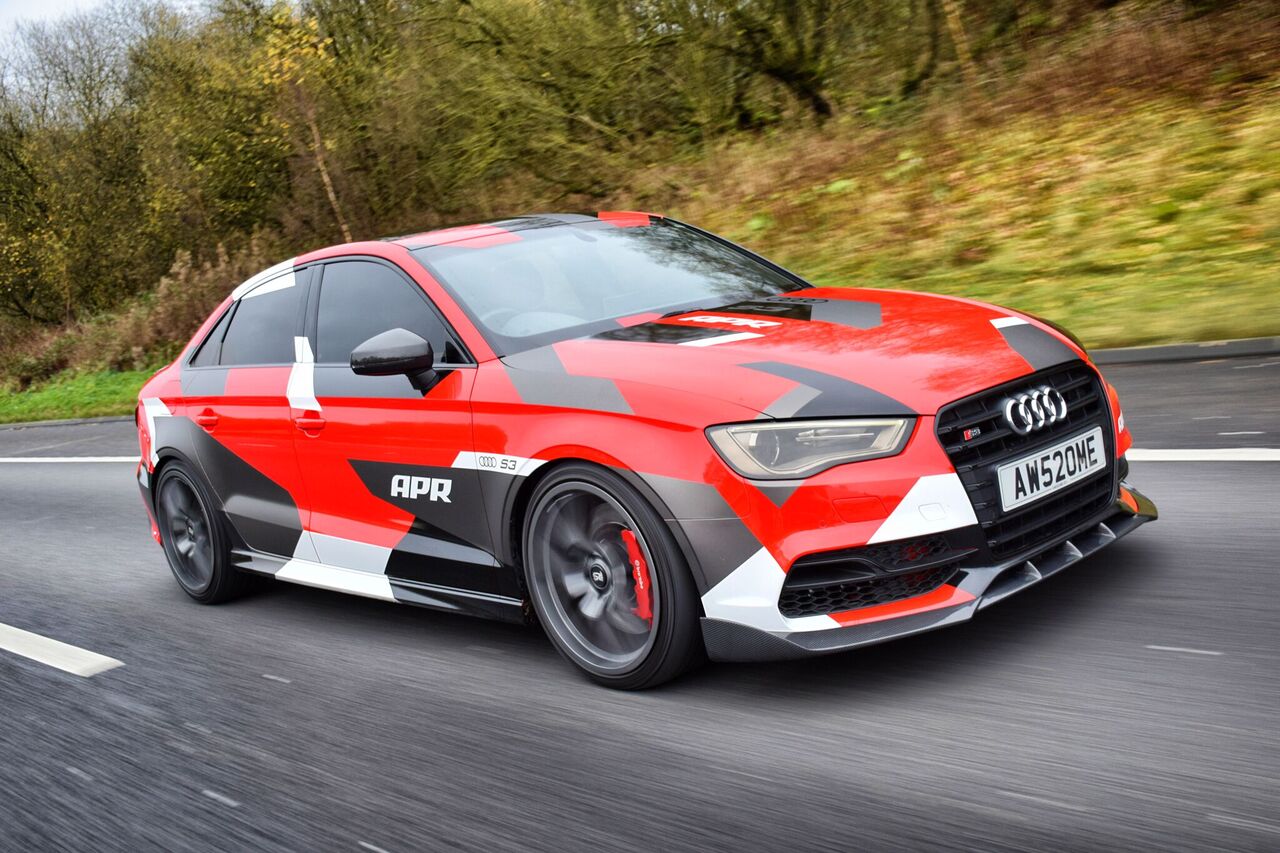 The livery means that this car can’t help but stand out wherever it goes, but we’re particularly fond of the more subtle additions Awesome has seen to factor in, like the splitter, diffuser, rear spoiler and door mirrors, all constructed from high grade carbon fibre. 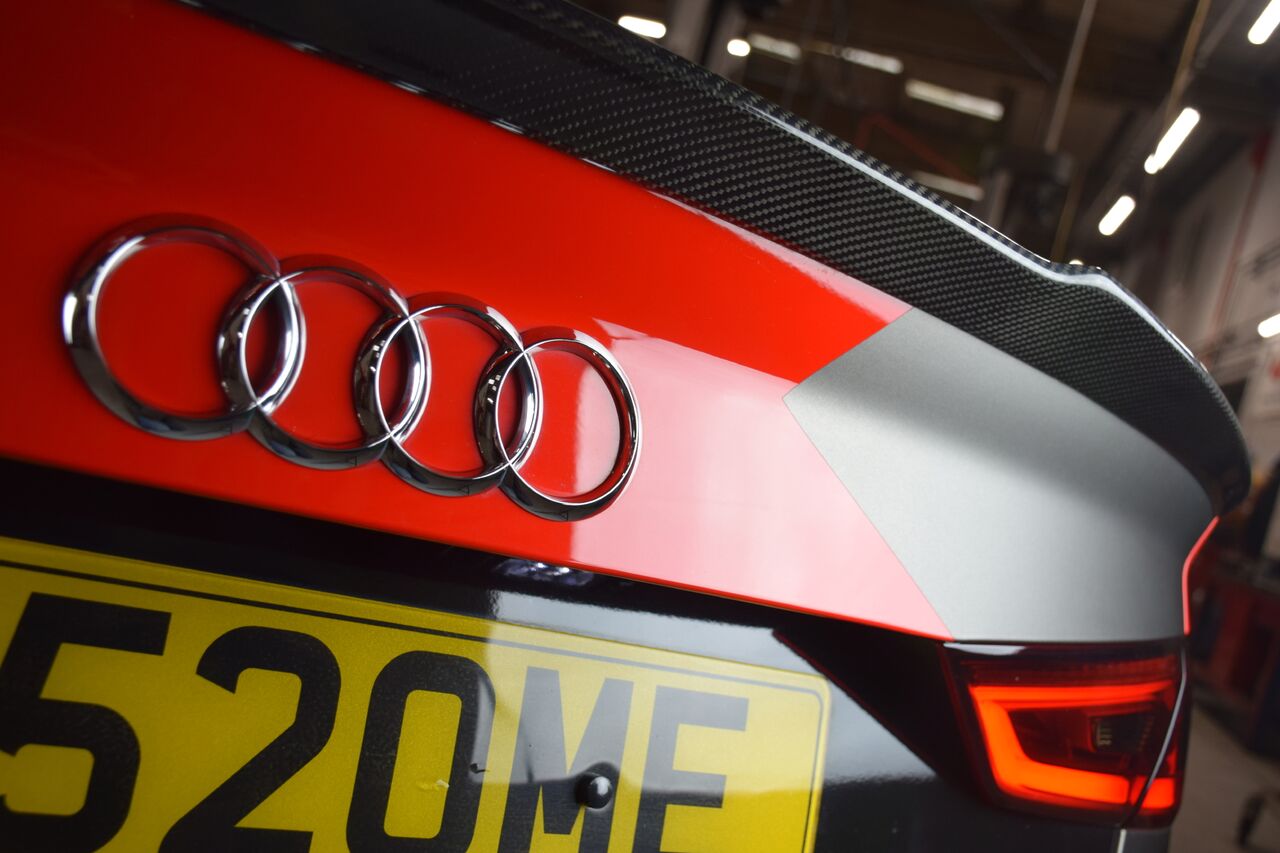 So, what’s next? Well the life of a demo car is a hard one, so expect the S3 to be put to work drumming up support for the Stage 3 package (and much else) it now boasts, and there’s no denying that it represents the best means of extracting massive power from MBQ platform cars with E888 engines. It means that though it might currently look like fully formed and finished car, there are almost certainly going to be further developments in the coming weeks and months, so watch this space! 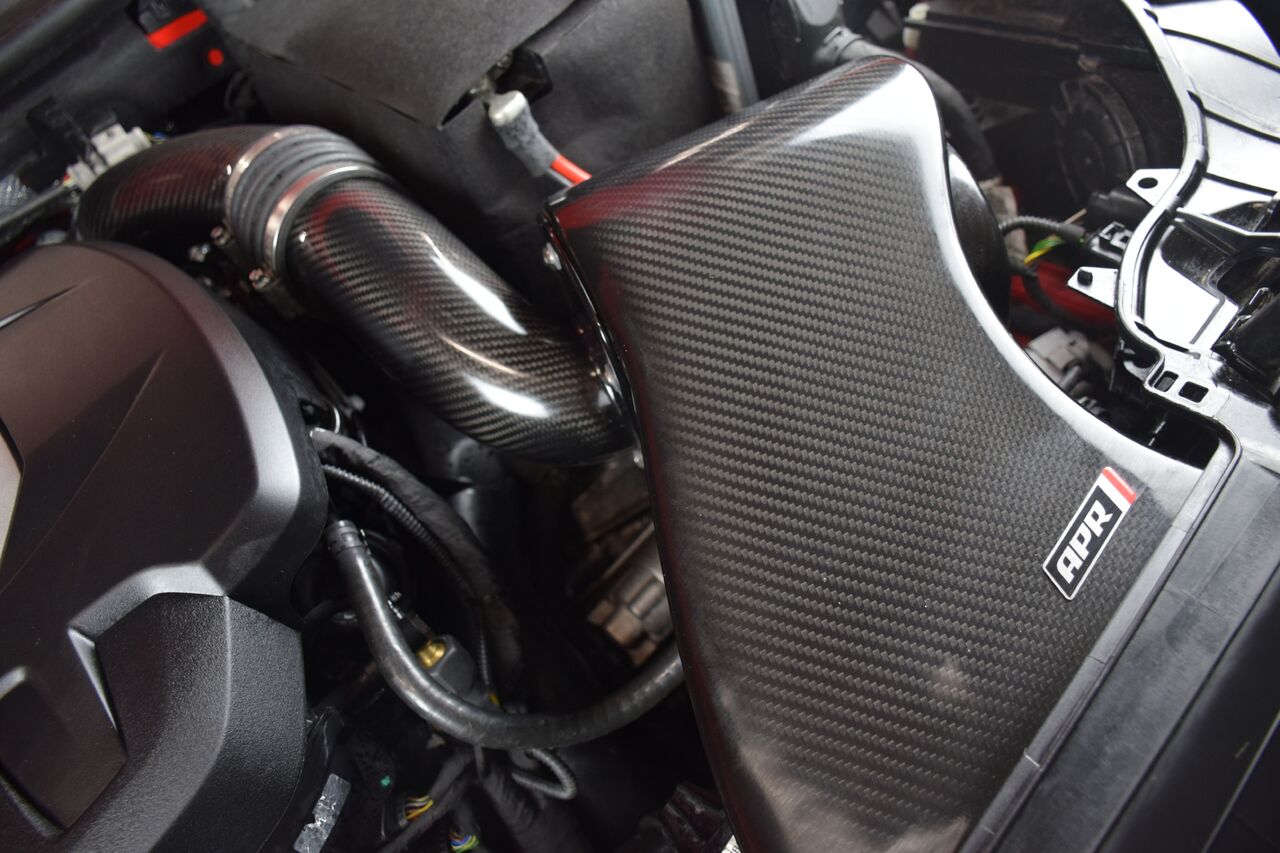 BOX OUT – The AFR Turbocharger System
The twin scroll EFR7163 turbo forms a key part of the Stage 3 kit, so it’s well worth taking a closer look at its capabilities. AFR has extracted as much as 520bhp from MQB cars fitted with this kit and has seen 10-second quarter-mile times, yet this hasn’t come at the expense of everyday drivability. Indeed, cars fitted with this turbo setup have been shown to retain OEM-levels of lag, while at the same time being devoid of the compromises many would expect of an engine of this size and with this state of tune. 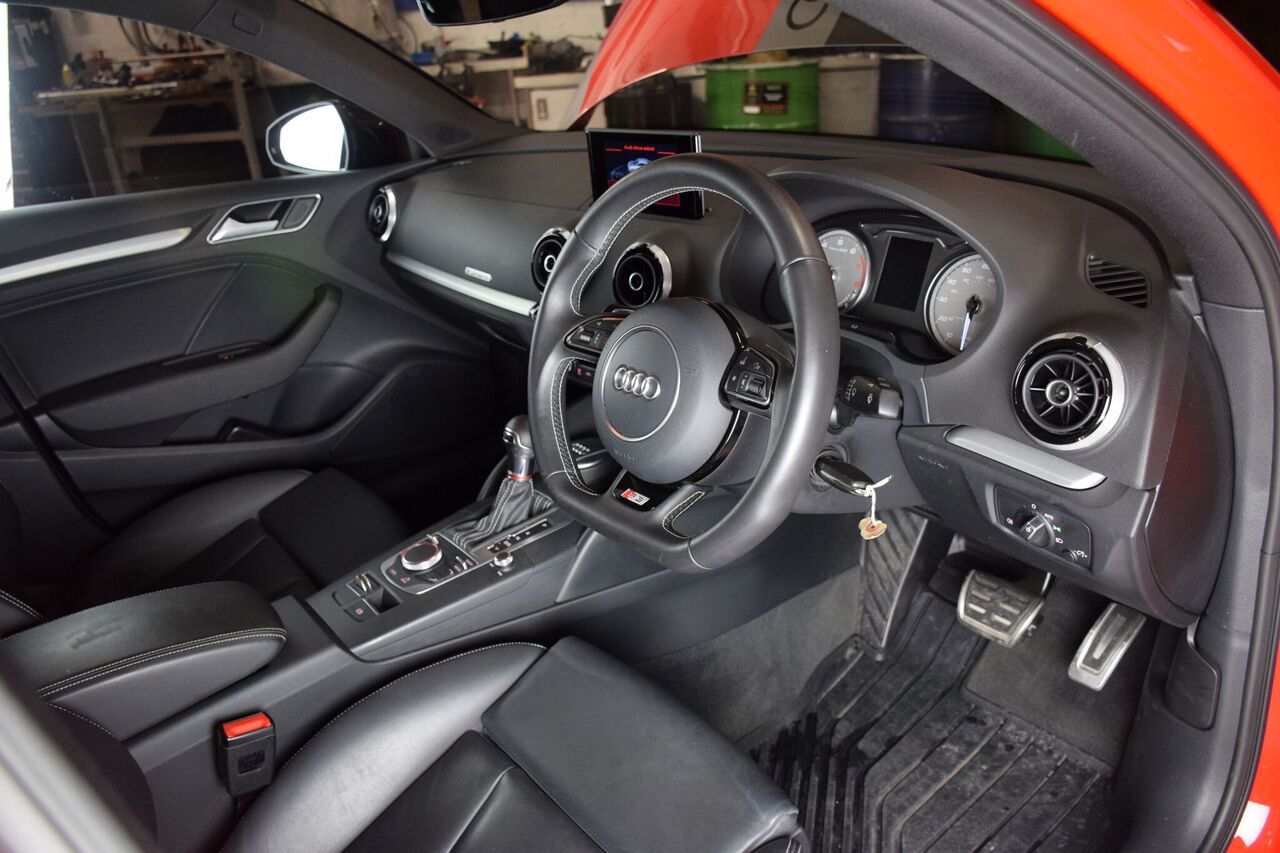