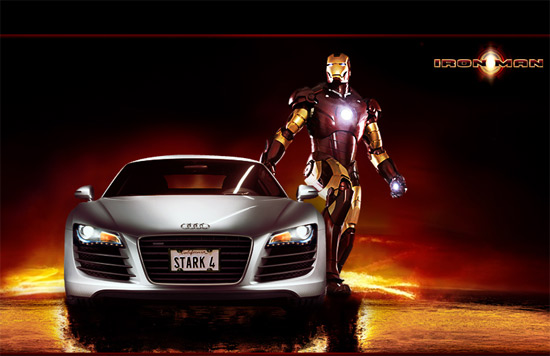 Robert Downey Jr. plays Tony Stark, the leading man in the Paramount and Marvel Studios movie version of “Iron Man”. Head of a big industrial complex, he owes his super-powers to an indestructible, hi-tech suit of armor of his own design that has a variety of uses and earns him the title “Iron Man.”

When he’s not wearing it, this billionaire technophile relies on his Audi R8. It matches Stark’s super hero guise very well: The slits through which Iron Man views the world resemble the all-LED headlamps on the R8, Stark’s artificial heart with its ring of lights recalls the sports car’s exposed mid-engine and his immensely tough armor is matched by the Audi Space Frame, the high-strength aluminum structure on which this hi-tech automobile is built. The film’s hero and his favored mode of transport both symbolize Audi’s famous technical leadership claim: “Vorsprung durch Technik.”

“The Audi R8 is the perfect car for Tony Stark,” says Iron Man’s director Jon Favreau. “It’s a technical masterpiece, it’s fast and safe – and it’s the ultimate eye-catcher.” Tony Stark delights in luxury; he’s intelligent, demanding and a lover of life to the full. Naturally he utilizes his exceptional abilities for the good of mankind – when he takes on the personality of Iron Man, his super-hero alter ego. There has never been a comic-strip hero with such a deep-seated understanding of technology and the opportunities opened up by innovation and progressive ideas.

The attitudes that the leading character represents were one of the main reasons why Audi became involved in this production: interaction between the role, the movie as a whole and the product is the decisive factor in successful product placement. Michael Renz, Head of Central Marketing at Audi, says: “The character and lifestyle of Tony Stark tie in very well with the attributes of the Audi R8. And in any case, “Iron Man” is one of the world’s best-known, never-aging super-heroes – an opportunity we were determined not to miss!” 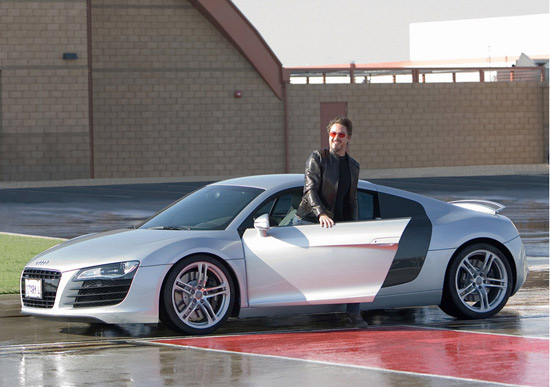 But in reality the combination of automobile and screen hero has to be credible – actor Robert Downey Jr. sees it this way too. “I grew up with the Audi mystique. This carmaker has always been right in the forefront when it comes to technology, performance, innovation and safety. I see Tony and myself as worthy ambassadors for Audi – we’re genuine fans of the make.” Renz too regards this as an important precondition: “Unless the star of a production identifies with the brand, and the image of the leading role matches what Audi stands for, the connection is simply not credible enough. We’re fortunate in this respect: Many Hollywood stars value Audi very highly, and are driving our cars in their private lives anyway.”

Audi has another worthy ambassador on the cast list too: Tony Stark’s assistant Virginia “Pepper” Potts, played by Gwyneth Paltrow, drives an Audi S5 in the movie. She is an intelligent, ambitious woman who knows exactly what she wants. The sporty dynamics and elegant finesse of the Audi S5 suit her character well. Her honest approach is evident as the plot progresses: She supports Tony Stark unhesitatingly even before he plunges into his fight against the evil forces of this world. As the chief executive of Stark Industries, a gigantic multinational armaments group, the billionaire demonstrates his ability as a business policymaker. His life changes abruptly, however, when he is kidnapped while launching one of his latest inventions in Afghanistan. The criminals intend to force him to build a weapon of immense destructive force. 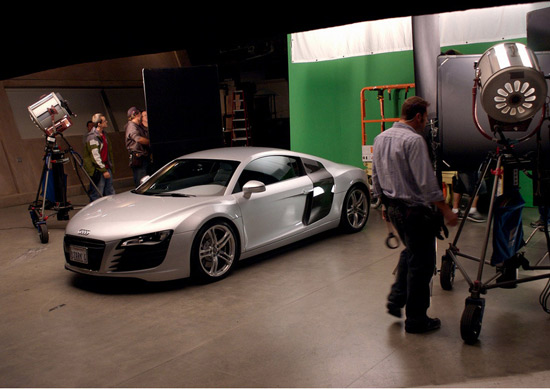 Instead of this, Stark develops and builds a revolutionary metal suit of armor while in the kidnappers’ clutches. With its aid he is able to escape and reach home again. His next move is to perfect his suit and start to combat what proves to be a conspiracy of global dimensions. Another loyal colleague in addition to Virginia “Pepper” Potts is Lieutenant Colonel James Rhodes (“Rhodey”), played by Terrence Howard.

This comedy drama, which is full of action and special effects, opens in theaters around the world in early May 2008, but fans and other interested people all over the world don’t need to wait for the movie to reach their local theaters before immersing themselves in the world of “Iron Man.” An Audi micro-site has been produced especially for this movie. On its complex home page the user can pay a virtual visit to Tony Stark’s top-secret New York workshop. Two perspectives are available: Through the eyes of Tony Stark, trailers and background information on the movie can be called up and viewed. Alternatively the special “Iron Man Vision” infrared viewer can be used, for instance to explore the design details of the Audi R8 and A5. The micro-site also contains historical facts about Audi and the ‘Iron Man’ comic strip, which can be found in a virtual Audi R10 TDI racecar.

“One Man. One Machine. One Mission.” The online campaign starts with this motto alongside the micro-site. The key visual shows Iron Man with the Audi R8. This action-packed motif recalls a movie theater poster and is intended to draw Internet users’ attention to the web site. The decision in favor of this theater-style campaign was a deliberate one, with the aim of strengthening the link between the Audi R8 and Tony Stark, alias Iron Man. In communication terms it is very different from regular Audi advertising. “We want to address a young movie-going public directly,” says Michael Renz. Advertising measures are also being put into effect at Audi dealers, starting in March.

Early in April, communication measures in Germany will be stepped up, with outdoor advertising and movie theater trailers. A notable feature of the trailers is that they were produced especially for Audi and are made up of exclusive scenes from the movie and Audi road shots. All eleven trailers will be placed on the micro-site in succession by the time the movie reaches theaters in early May 2008.

Although the Audi R8 impressed the cast and the production team so much while the movie was being shot, director Jon Favreau found himself facing a slight problem as the story reached its climax. He had planned for the car to be used in a final scene by being involved in a dramatic collision with Iron Man’s wicked adversary. This had to be omitted from the final cut, Favreau explains: “The crash just wasn’t spectacular enough! Our stunt specialists did their best to turn the R8 over onto its roof, which would have given us a dramatic final scene, but they failed – the car clung to the road too well!”

It looks as if the Audi R8 had better stick to what it does best, even after a promising start to its acting career. One of the great Hollywood stars of the past could maybe have hammed this scene with the director’s help, but not a car designed and hand-built according to Audi’s famous “Vorsprung durch Technik” slogan. A car such as this guarantees top dynamic performance, technological leadership and, thanks to its quattro permanent all-wheel drive, clings firmly to the road. Never mind if a spectacular crash could save the world – it’s simply too much to expect of an Audi R8 that’s built to perform its task perfectly in every other way.

Audi has a long product placement tradition. Systematic placement of automobiles in movies is an important element in its communication strategy. Of course, all activity of this kind has to be in conformity with Audi’s general brand strategy. This is why Audi chooses the projects carefully. Its contribution to the movie ‘I, Robot’ (2004) was spectacular: Will Smith drove the RSQ, which was especially designed for ‘I, Robot’ and in fact a futuristic design study for the Audi R8 now seen in ‘Iron Man’. Cars from the brand with the four-ring emblem were also to be seen as “leading automobile actors” in John Frankenheimer’s classic action movie ‘Ronin’ (with Jean Reno und Robert De Niro, 1998), and in ‘The Insider’ (with Russell Crowe, 1999), ‘Mission Impossible II’ (with Tom Cruise, 2000), ‘The Mothman Prophecies’ (with Richard Gere, 2002), ‘About a Boy’ (with Hugh Grant, 2002), Reese Witherspoon’s ‘Natural Blonde 2’ (2003), ‘Transporter 2’ (Jason Statham, 2005) or ‘The Bourne Ultimatum’ (Matt Damon, 2007).

AUDI AG sold a total of 964,151 cars in 2007 and thus achieved its twelfth consecutive record year. Audi produces vehicles in Ingolstadt and Neckarsulm (Germany), Györ (Hungary), Changchun (China) and Brussels (Belgium). At the end of 2007, production of the Audi A6 started in Aurangabad, India. The company is active in more than 100 markets worldwide. AUDI AG’s wholly owned subsidiaries include Lamborghini S.p.A. in Sant’Agata Bolognese, Italy, and quattro GmbH in Neckarsulm. Audi employs more than 54,000 people worldwide, including 45,000 in Germany. The brand with the four rings invests more than € 2 billion each year in order to sustain the company’s technological lead embodied in its “Vorsprung durch Technik” slogan. Audi plans to nearly double the number of models in its portfolio by 2015, from the 25 currently on offer to 40.

2 Responses to Ironman and Audi R8