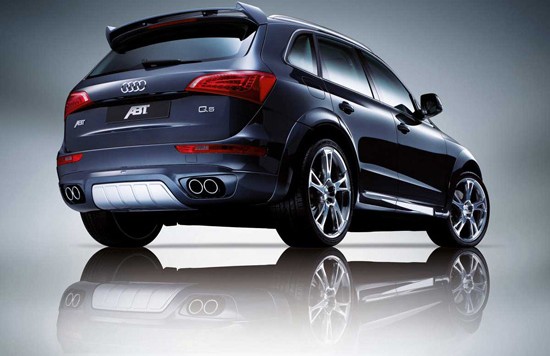 The new ABT Q5

With the ABT Q5 the world’s largest tuner of vehicles from the VW group continues a series which has been extremely successful both technically and optically. This is because the classy yet sporty SUV is the latest in a range of exquisite vehicles, whose success began with the Touareg and was continued by the AS7 and Tiguan.

The company from southern Germany has also developed a design for the new Q5, which makes the diverse car appear as powerful, confident and very harmonic. Pure class in every situation – that is precisely what this sublime SUV from ABT also stands for: the front spoiler and the prominent front grill find their equivalent in the fender extensions and door trims. Each detail is optically harmonised up to the crowning “finish”, formed by the rear wing and rear apron.

The design also continues in the interior: decorative inserts made of carbon leather improve the ambience and also give the “work place” a stylish and classy look. The ABT muffler is also part of the perfect appearance of the ABT Q5, and with its four tail pipes precisely indicates the sporting pedigree of the SUV.

The use of BR alloys is also recommended, which look particularly good on the car in 22 inch form. The ABT Q5 looks impressive everywhere, be it at the golf course, by the opera or on the promenade. But the diverse sports car really wants to be driven, as thanks to the engineering art of the German company the engines are in even better condition: with ABT POWER, the 2.0 TDI offers a powerful 190HP (140kW) instead of 170HP (125kW). The Q5 goes about its work powerfully with the 3.0 TDI: with ABT POWER S it provides 310HP (228kW) on the road. Thanks to the enormous torque of 610Nm the engine can cope with ease in any situation. The 2.0 TSI is also excellently harmonised with the vehicle: with ABT POWER it offers a sporty 240HP (177kW) instead of the standard 211HP (155kW) and is soon going to be upgraded to 275 HP (203kW).

In order to ensure that the SUV remains controllable, the ABT technicians have developed a finely tuned packet to lower the centre of gravity of the car and have attached corresponding springs. The ABT Sports braking unit (disc diameter: 380 millimetres) is responsible for providing perfect braking performance. Its built-in flexible steel brake lines, together with the large brake discs, provide lower fading in repeat braking manoeuvres.