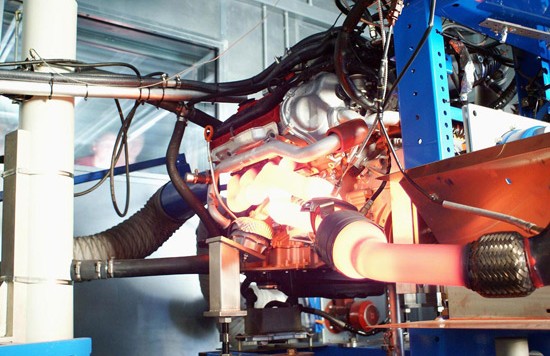 The fast art of engineering

Drivers who want more power for their Audi, VW, SEAT or Skoda come to ABT Sportsline or one of its Volkswagen partners, which can be found anywhere across the country, as the Kempten art of engineering always provides for increased torque, more power and better acceleration. ABT engine tuning optimally utilizes the potential of the vehicle without exceeding the capacity of the engine and its auxiliaries.

At ABT Sportsline’s development department, the quality is tested under toughest conditions on the brand new engine and roller test stand: here, the power upgrades are tested with engines running under real conditions – without mercy, right to the limits – and beyond. “We demand high performance the client can rely on”, says Hans-Jürgen Abt. A client who, for example, has his vehicle featuring a 3.0 TDI upgraded from 240hp (177kW) to torquey 310hp (228kW) can be sure that the durability of the optimized engine really has been put through its paces.

No matter which power package the client decides for, he can be certain that he will get ABT know-how: right from the beginning, the Kempten-based tuners have been pioneers in the field of electronic engine tuning. Optimizing the engine management of diesel and petrol cars means that “performance-relevant software parameters are specifically adapted to achieve sporty characteristics and an ideal overall setup”, says Andreas Zeilbeck, technical director. This optimal utilization of the engine potential is called ABT Power. To those looking for even more power, ABT Power S is the perfect package: here, too, the engine management is optimized; moreover, an ABT turbocharger provides for even more engine power. After all, the S stands for “Sport”. ABT Power and ABT Power S do not increase CO2-emissions – measured according to the new European test cycle. Real racers for the road are the vehicles with the ABT Power R logo: optimized engine management and an ABT supercharger provide for merciless acceleration, high top speed and almost unlimited power reserves. The name ABT Power says that the vehicle features technology developed and adjusted by Allgäu art of engineering.

A comprehensive video about ABT performance upgrading can be found at:
www.abt-sportsline.de/abt-tv