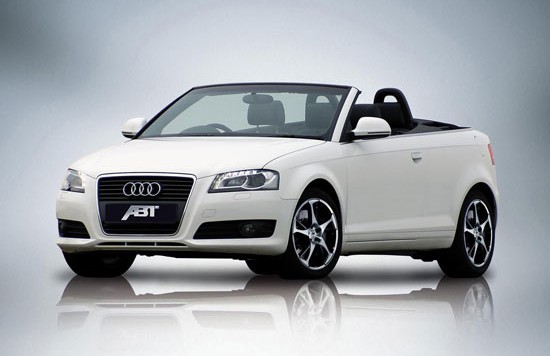 At the moment, the Kempten designers indeed are working on the perfect body parts for the convertible AS3 at full speed, but already now it becomes apparent that the compact vehicle will become a feast for the eyes.

What the famous car tuner from the Allgäu understands of a real sun-worshipping convertible already show the ABT Eos and the ABT Audi TT Roadster: for the Volkswagen convertible as well as for the open version of the successful model from Ingolstadt, the ABT team developed body styling parts which accentuate the character of each vehicle and which let them appear even more distinctive from every perspective: the low front spoiler, the side skirts and the rear skirt inset with the typical 4-pipe rear muffler emphasize the sporty ambitions of the fancy ABT Eos and give it a self-confident appearance. Even more so with the BR wheel which seems to have the urge to move forward, even when standing still. It goes without saying that this wheel also fits the TT Roadster like a glove because this breathtaking vehicle appears very dynamical even without the Allgäu body kit. The team from Kempten turns the open-roof TT into a real athlete which looks like a 100-meter sprinter ready to start: the front skirt, the lateral body parts, the rear skirt inset and the rear wing are forming a successful unit, in every respect. With this modifications, the sports car does not only cut a good figure on country roads and motor-ways but also on the boulevard.

Either closed or opened, a real ABT does not only look fast, it is in fact fast. This ensure the diverse ABT POWER packages for the Eos and the TT Roadster which actually satisfy performance hunger: with ABT POWER, the 2.0 TFSI engine is increased from serial 200hp (147kW) to 240hp (177kW). With ABT POWER S even 270hp (199kW) or remarkable 300hp (221kW) are provided. The sportiest version ABT offers is for the 6-cylinder engine with 3.2 liter cubic capacity: ABT POWER R stands for optimization of the motor management and for compressor conversion with water cooled intercooler.

In figures this means a proud power increase of 120hp (88kW). 370 authentic horsepower (272kW) are offered with ABT POWER R. Also the 2.0 liter diesel engine in the Eos becomes sportier: the serial 140hp (103kW) can be increased to powerful 170hp (125kW). ABT Sportsline, of course, also offers perfectly adjusted suspension components and brakes for the fast convertibles. This enables the ABT Eos and the ABT TT Roadster to cope with every situation and to offer pure driving pleasure. These positive characteristics are exactly what also the new ABT AS3 Cabrio will offer – and hence will continue the success story of the open sports cars from the Allgäu…