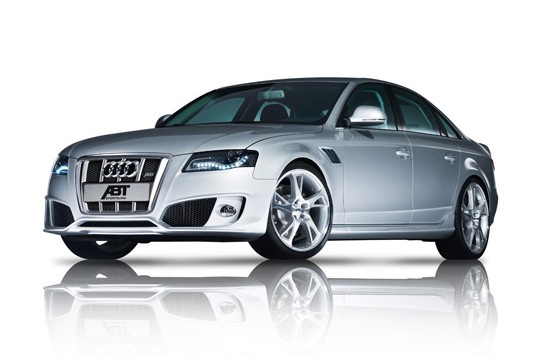 New front grille for AS4, AS6, AS7 and AS3 Facelift

The single frame grille of the newest Ingolstadt model range is definitely a striking design object. ABT Sportsline has directed its whole attention to this specific design element and has advanced a front grille for the models AS4, AS5, AS7 and AS3 Facelift so that it equals the philosophy of the world’s leading tuner of cars of the Volkswagen group: The optics must support the self-confident and dynamical appearance of the car – and this is exactly what ABT achieves with the new front.

Noticeable are the five massive longitudinal ribs which give the face of the AS4, AS5, AS7 and AS3 Facelift even more presence and accentuate the character of the sports cars from Kempten. The outermost struts continue the line of the ABT front skirt and fit perfectly into the sportive design concept. The new grille “made in Kempten” consists of high-quality ABS plastic and can be ordered at ABT Sportsline and its partners for about 380 euros (including tax). Of course the ABT grille suits also the serial version of the Audi A3, A4, A5 and Q7 outstandingly.

The perfect completion especially for AS4/AS5 and A4/A5: The ABT fender insets which give the sedan and the coupé an additional touch of sportiness. The “gills” show the viewer, already from the side, what potential a car from ABT has.