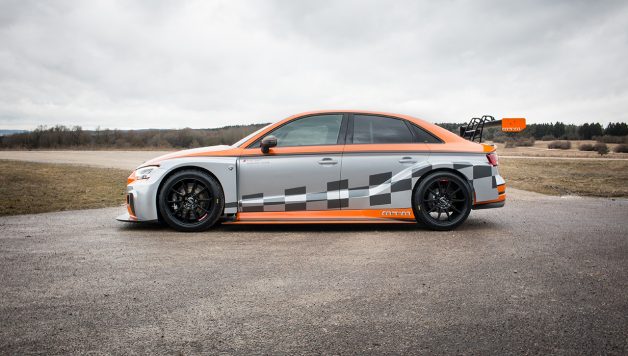 This year MTM is taking Stand 2045 in Hall 2 at the Salon – right in the heart of matters instead of on the fringe. There is a large stage and an impressive display for four outstanding new models from the house of MTM that focuses on cars from around the VW group. 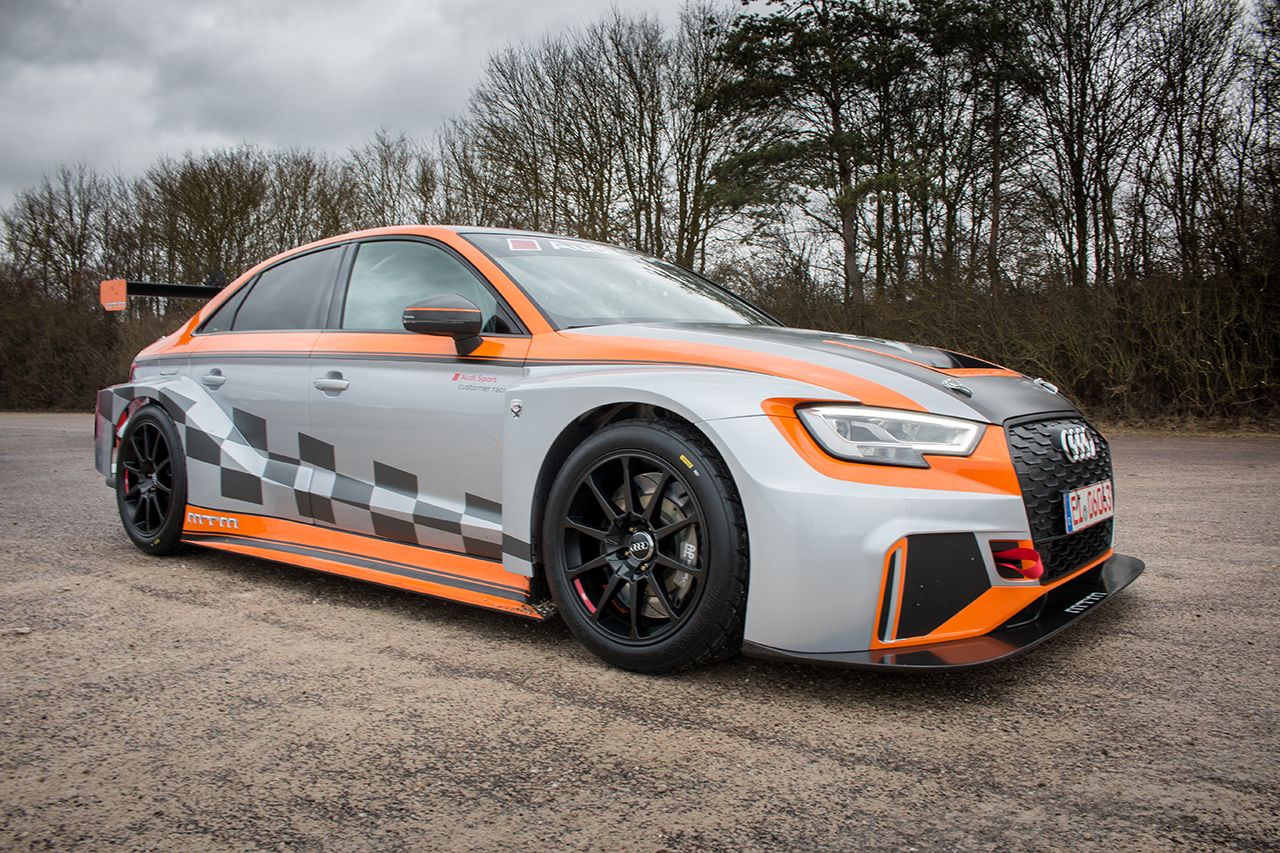 The doors open at “Palexpo” on 7th March to journalists from around the world and Roland Mayer, CEO of MTM, will greet his guests with news of power and torque increases and other high-tech advances, using as examples two Audis, a Bentley and a Porsche. 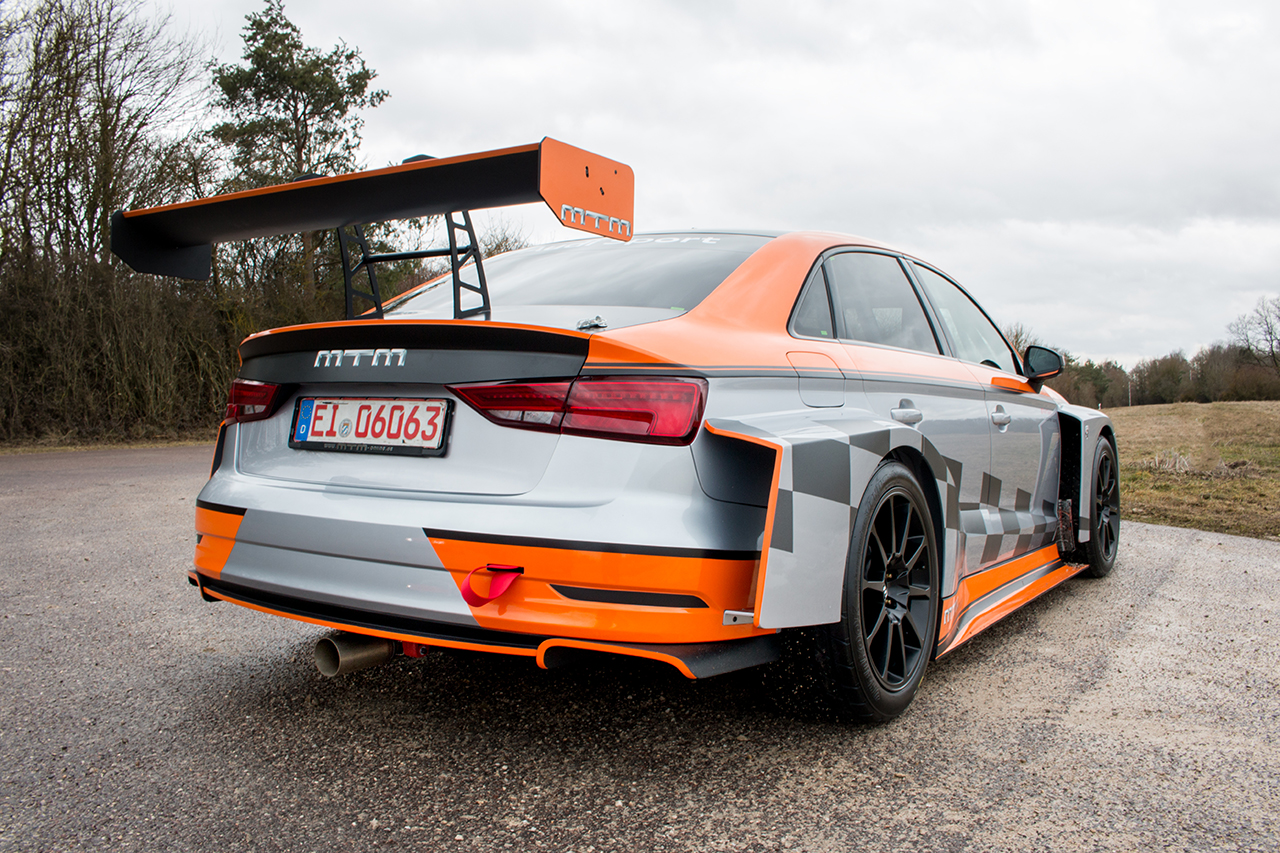 The first model is an Audi RS3 LMS, modified according to the regulations for the German ADAC TCR Series for driver Niko Kankkunen, son of the legendary rally champion Juha. It is entered in the series by Antti Buri, the Finnish MTM importer. The engine specification is fairly close to standard, with a 2-litre turbo motor developing 330PS (243kW) at 6,200 rpm and a maximum torque of 410Nm from only 2,500 rpm. The car will demolish the 0-100 km/h dash in 4.5 seconds. While the RS3 LMS is not actually homologated for street use, MTM is preparing road-legal beast featuring a transplanted 2.5-litre, 5-cylinder turbo developing 502 PS (369kW). Chassis and brakes are upgraded to cope with the increased power and the styling kit mimics the silhouette of the race car. 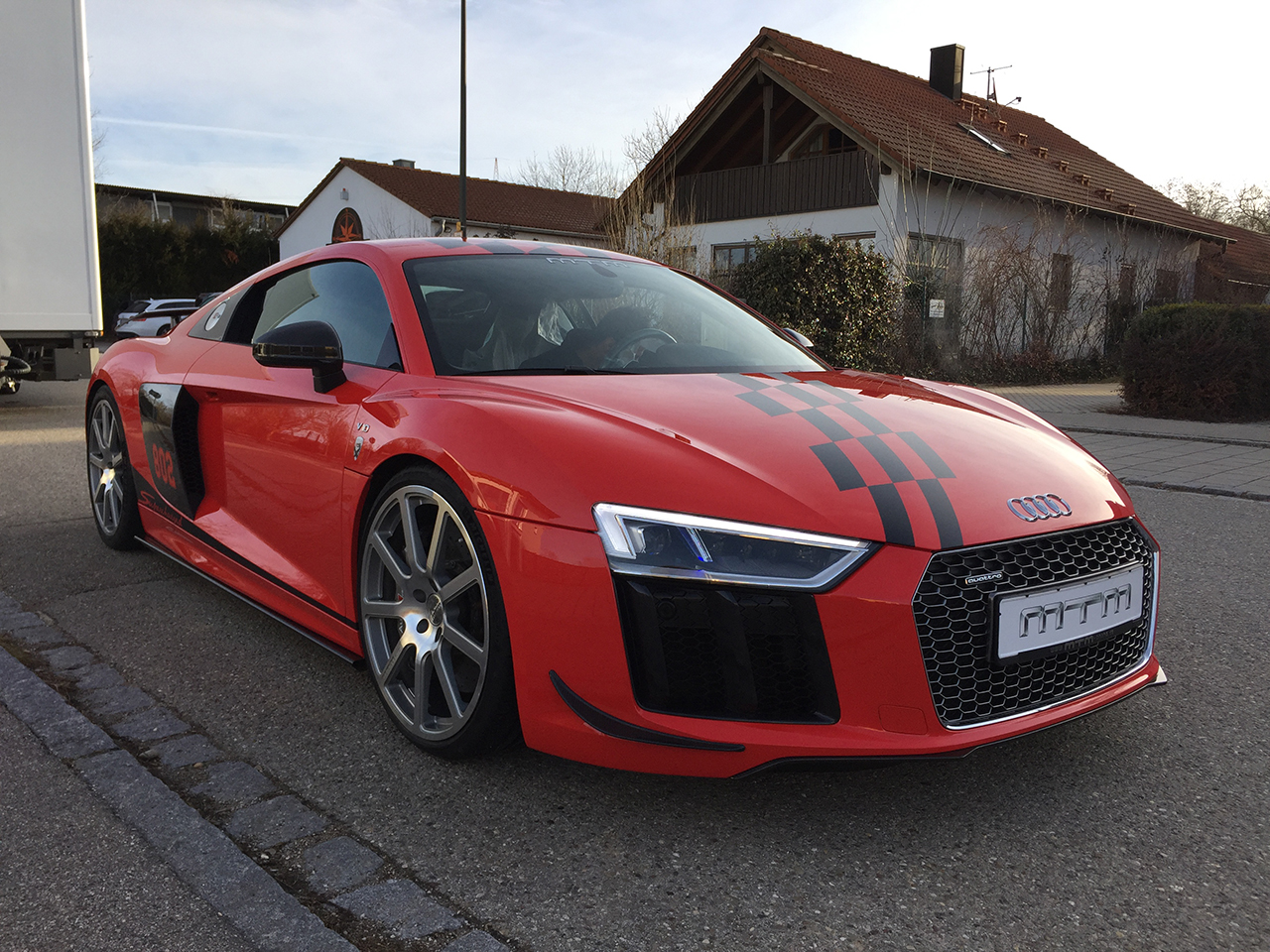 While the racer runs on 265/35 18 tyres, the street version is shod with 295/30 19 tyres on Nardo wheels. This will surely be another winning MTM combination. The blue Bentley GT Coupe Birkin Speed Eight weighs in at 2,280 kg, yet there is absolutely no hint of sluggishness about it. This luxury liner fairly hurtles away from the line thanks to reworked turbochargers that increase power from 507 PS (373 kW) to no less than 772 PS (568 kW) and 950 Nm of torque. Michelin Pilot Sport 4S tyres mounted on Bimoto 10.5” x 22” wheels grip the tarmac and an aero package enhances the imposing appearance. 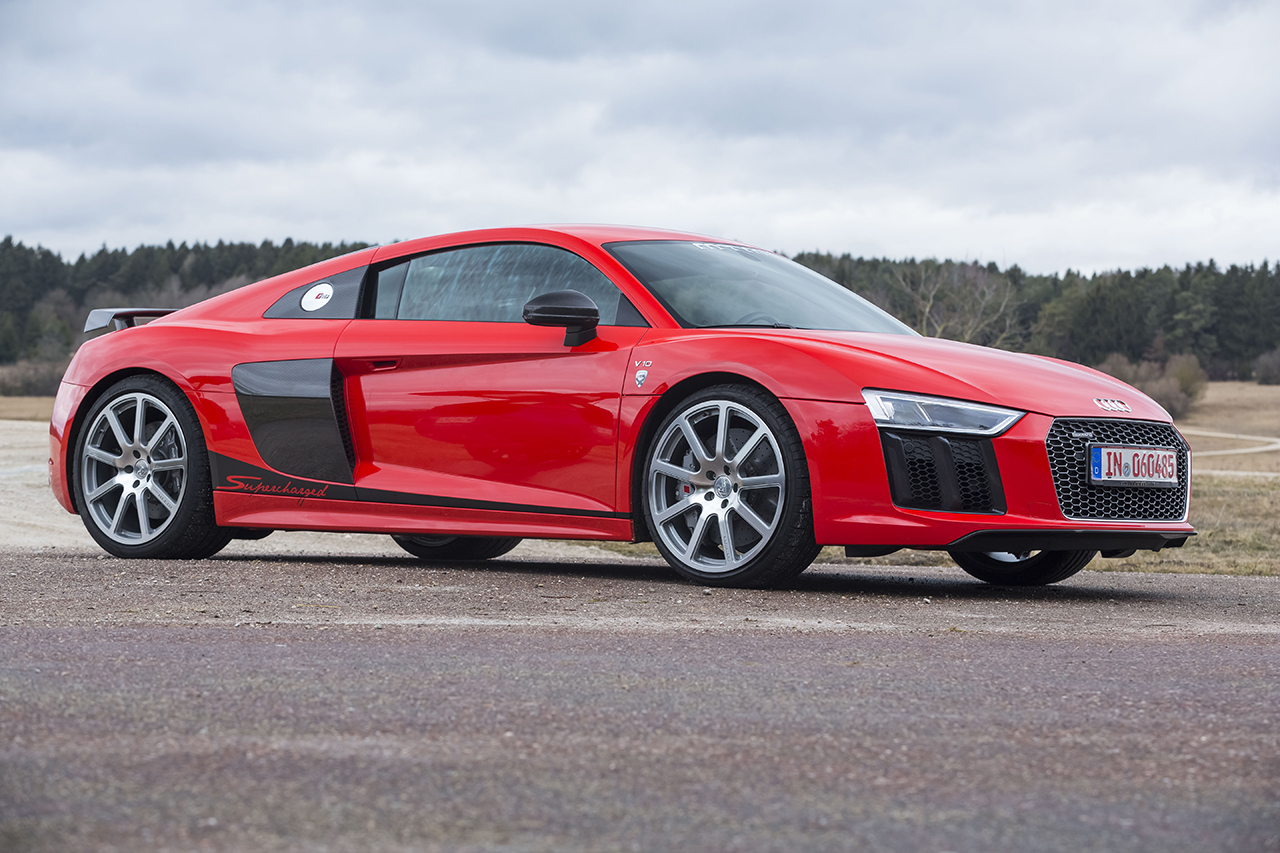 In contrast the feather-light Porsche Boxster S tips the scales at a mere 1430 kg. The standard outputs of 350 PS (257 kW)/420 Nm are increased by the skilled hands of the MTM engineers to 402 PS (296 kW)/490 Nm. This boost gives the Boxster an extra kick as it disposes of the 0-100 m/h sprint in only 3.8 seconds and reaches 200 km/h 10 seconds later. The torque has been increased using the MTM-Cantronic unit allied to a new exhaust system with control valve. The 2-seater cabriolet looks thrilling even when stationary. The wider 245/35 20 tyres on the front combined with 285/35 20’s mounted on 11” rims on the rear create the perfect stance. 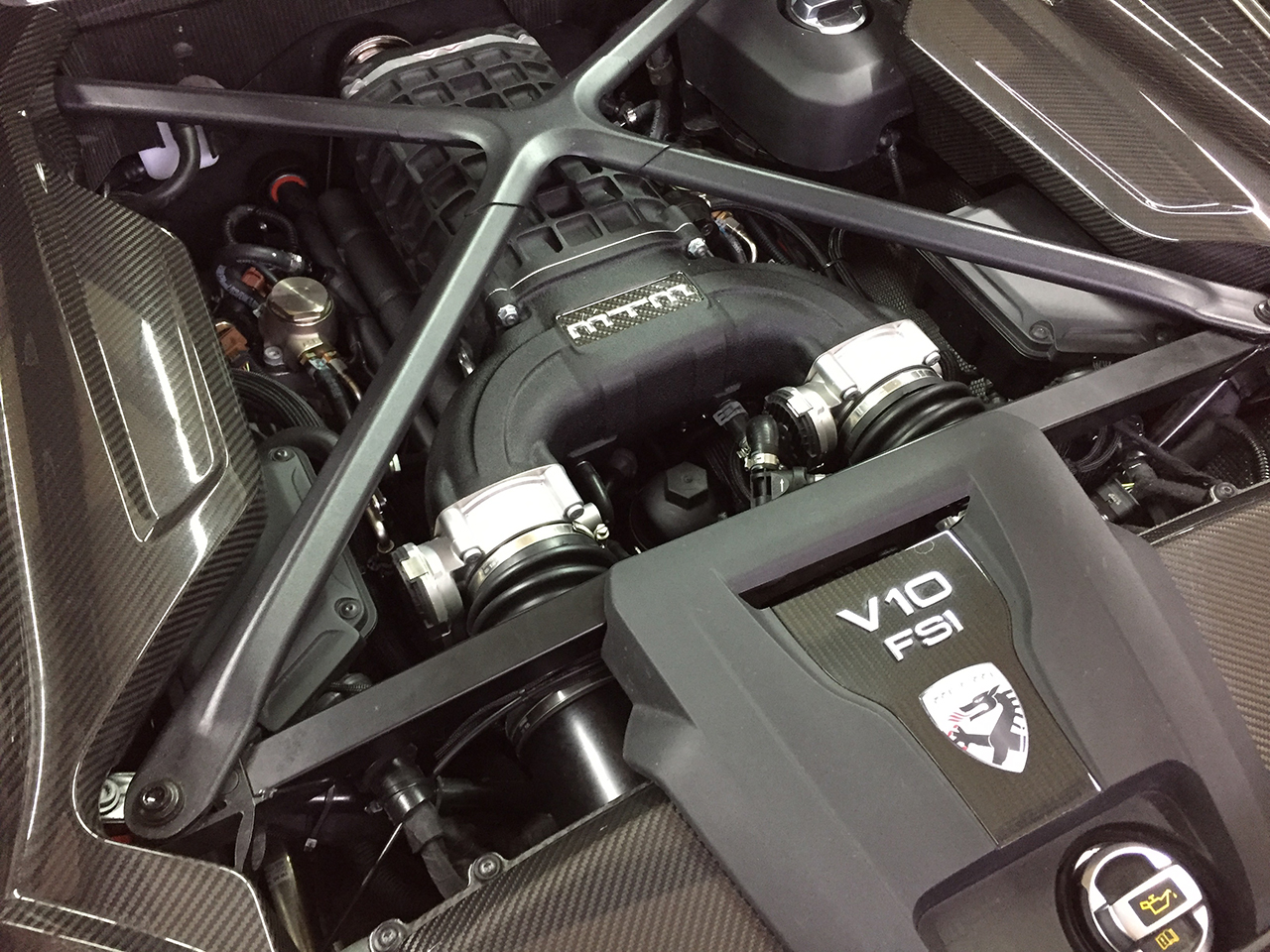 The finale arrives courtesy of the Audi R8 V10 Plus Supercharged, whose standard 5.2 litre V10 with 610 PS (449 kW)/540 Nm makes the car no slouch. “This coupe could have been designed for an injection of a little more excitement”, explains Roland Mayer, referring to the Eaton TVS2300 screw –type supercharger which pushes the motor to an impressive 800 PS (590 kW) at 8,650 rpm and 710 Nm of torque at 5,100 rpm. The R8 rockets from 0 100 km/h in the blink of an eye at 2.6 seconds and reaches 200 km/h in 8.5 seconds. As speed without stability makes no sense, the larger wheels wear Michelin Pilot Sport 4S tyres in the sizes 245/30 20 front and 305/30 20 rear. Additionally an aero kit in carbon fibre is under development and should appear in the accessory catalogue later in the year.