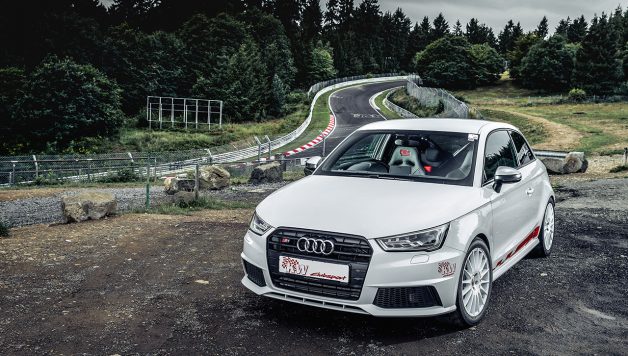 Have you ever noticed how a few small, seemingly insignificant letters have the power to send petrolheads into fits of automotive ecstasy? Take ‘GTI’ for example; depending on your preference and automotive grounding, this tiny little badge either calls to mind giant-killing Peugeots, epoch defining VWs, or if you’re especially odd, late ’90s Ford Escorts. Either way it’s proof of the power of badging and marketing, but it also puts the manufacturer in question under considerable about of pressure; there’s nothing to be gained and a huge amount to be lost from slapping an iconic badge on an un-deserving car. VW found this out to its cost with the lackluster Mk3 Golf GTI! 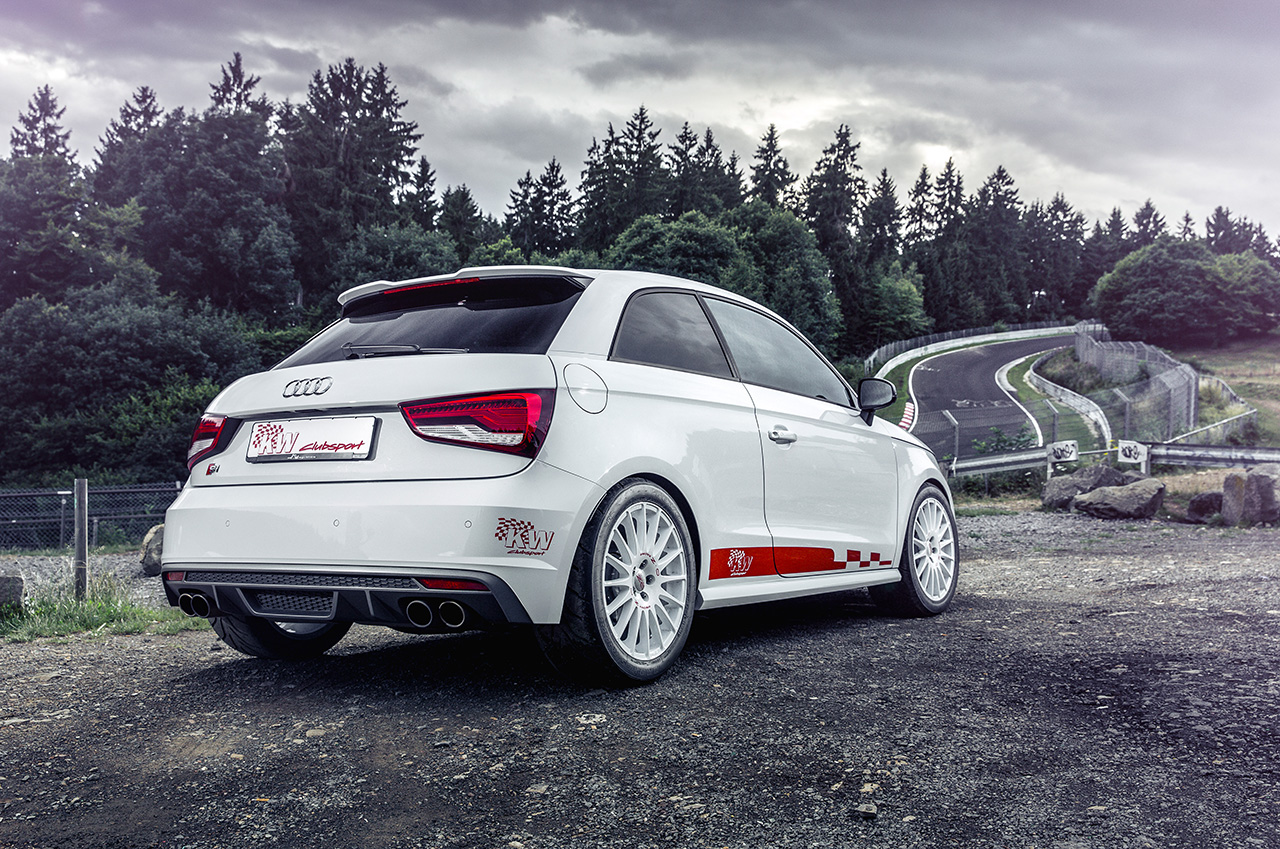 One car firm that’s been suitably hesitant about rolling out iconic badges is Audi, with the suffix in question being ‘S1.’ Those of you with even the most cursory of interests in motorsport will no doubt now be picturing barking five-pot Group B quattros monstering Alpine tarmac roads and undulating Finnish stages. It’s a powerful badge, make no mistake, and Audi is only too aware of its value. It meant that when the time came to actually use it on a road car, the Audi S1 quattro, it had to be a damn good one, and so it proved; the S1 has found near universal praise amongst the automotive press and is easily one of the most capable hot hatches in its class. 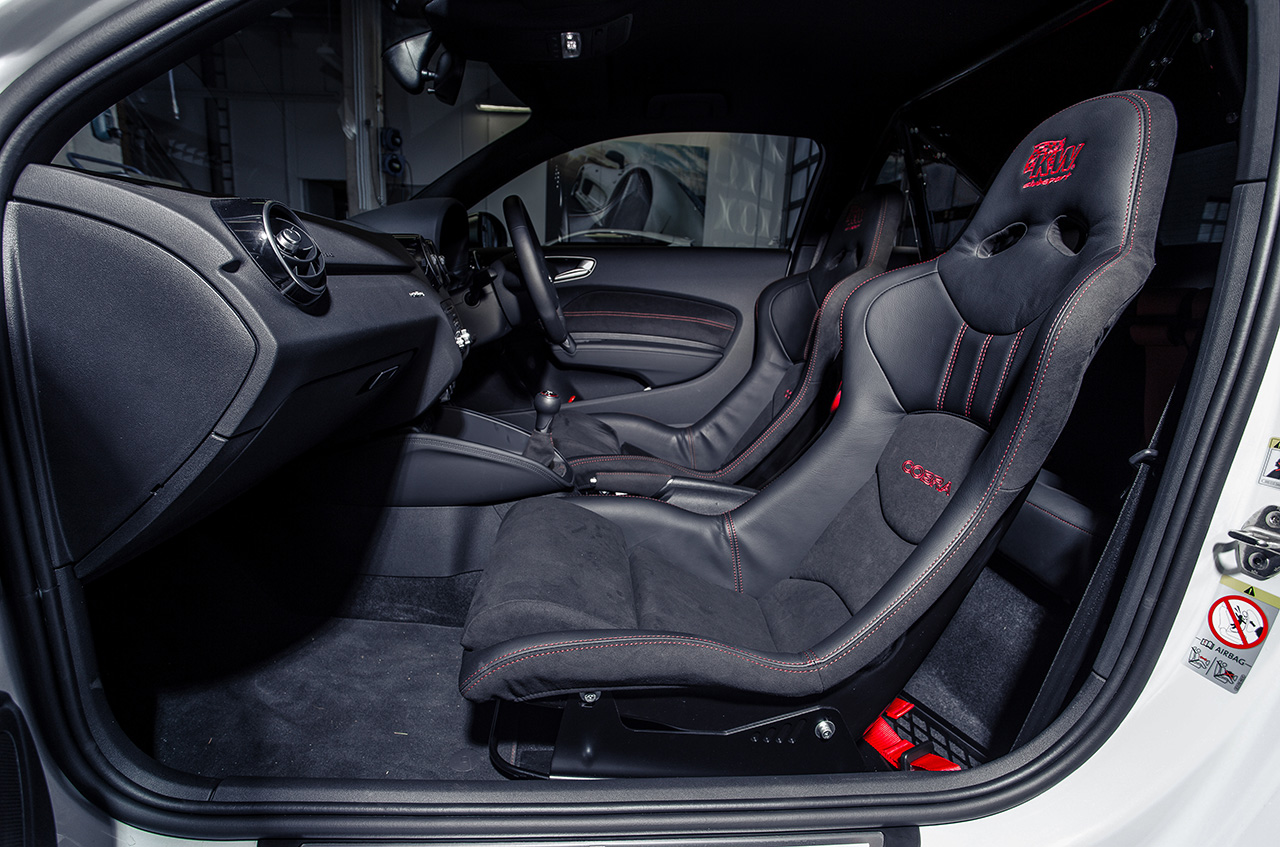 Of course there’s always room for improvement, and one area where big performance gains have long been made is suspension, and also an area that KW, one of the world’s most respected spring and damper merchants, knows a great deal about. The car you see before you has been built by KW over the last few years with the sole purpose of being a test bed and proving ground for some of the firm’s most specialised products, specifically the KW Clubsport range. We’ll let MD of KW UK, Richard Good, explain the rationale behind this. 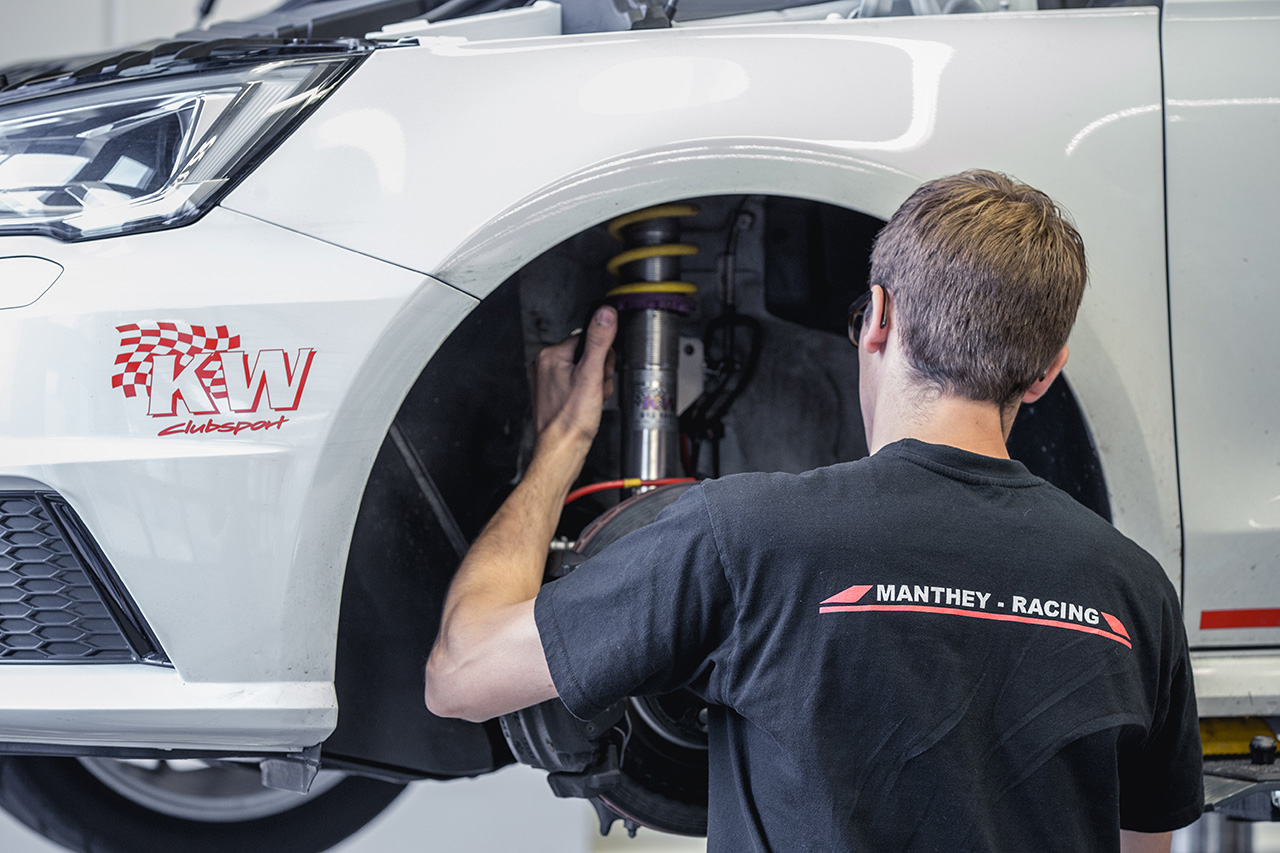 “The Clubsport was developed to be the ultimate in terms of track day suspension,” he explains. “Before this we were constantly having to create custom, modified versions of our V2 and V3 kits specifically for those customers seeking a more track-focussed car, and while the results were certainly impressive, we realised there had to be a better way.” 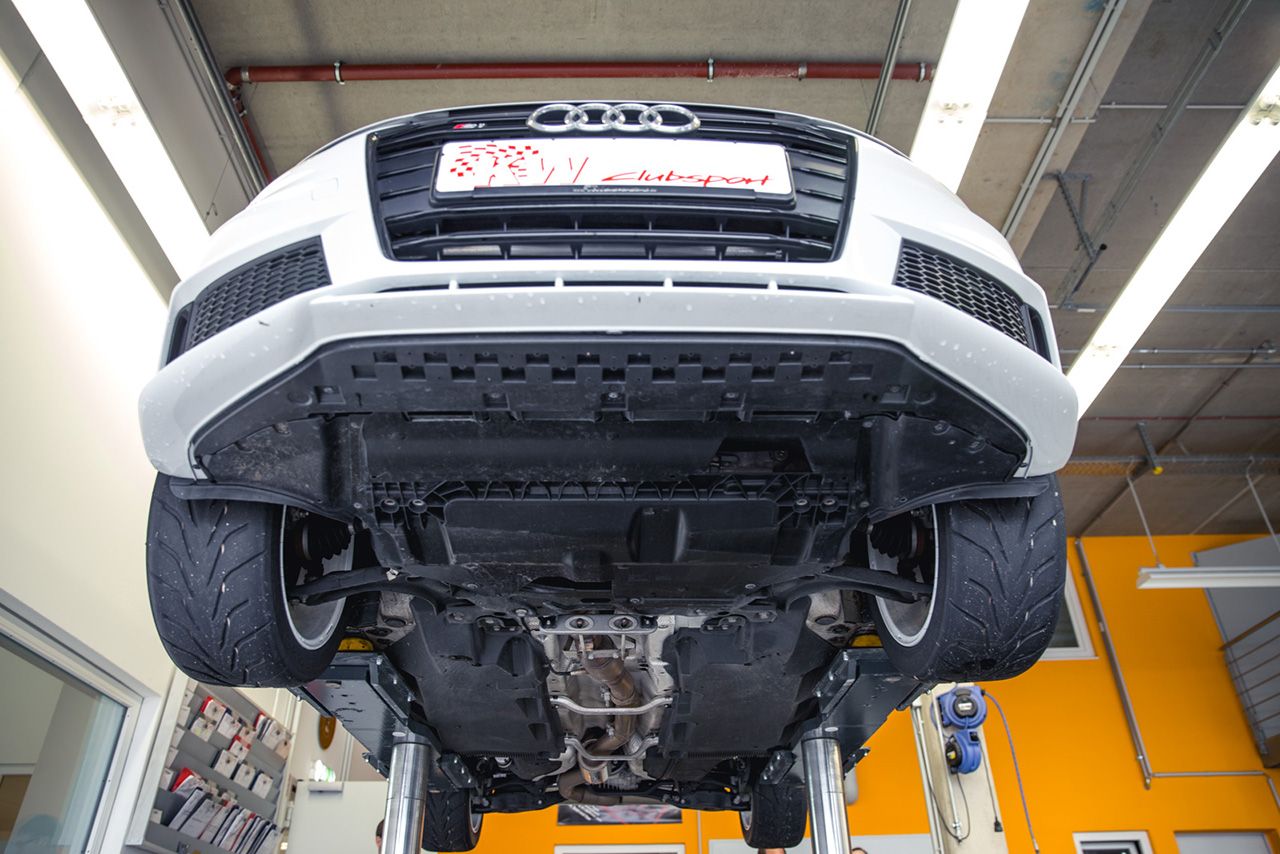 This led directly to the Clubsport, a coilover kit for those track enthusiasts that demand the last word in chassis finesse and handling. To put it simply, your average KW Clubsport buyer is something of a track day veteran and knows a good deal about automotive chassis work and handling, normally with a stripped out, performance-focussed car which they drive to and from track days. It’s this ability to be both at home on the track and the road that is the Clubsport package’s signature trait. 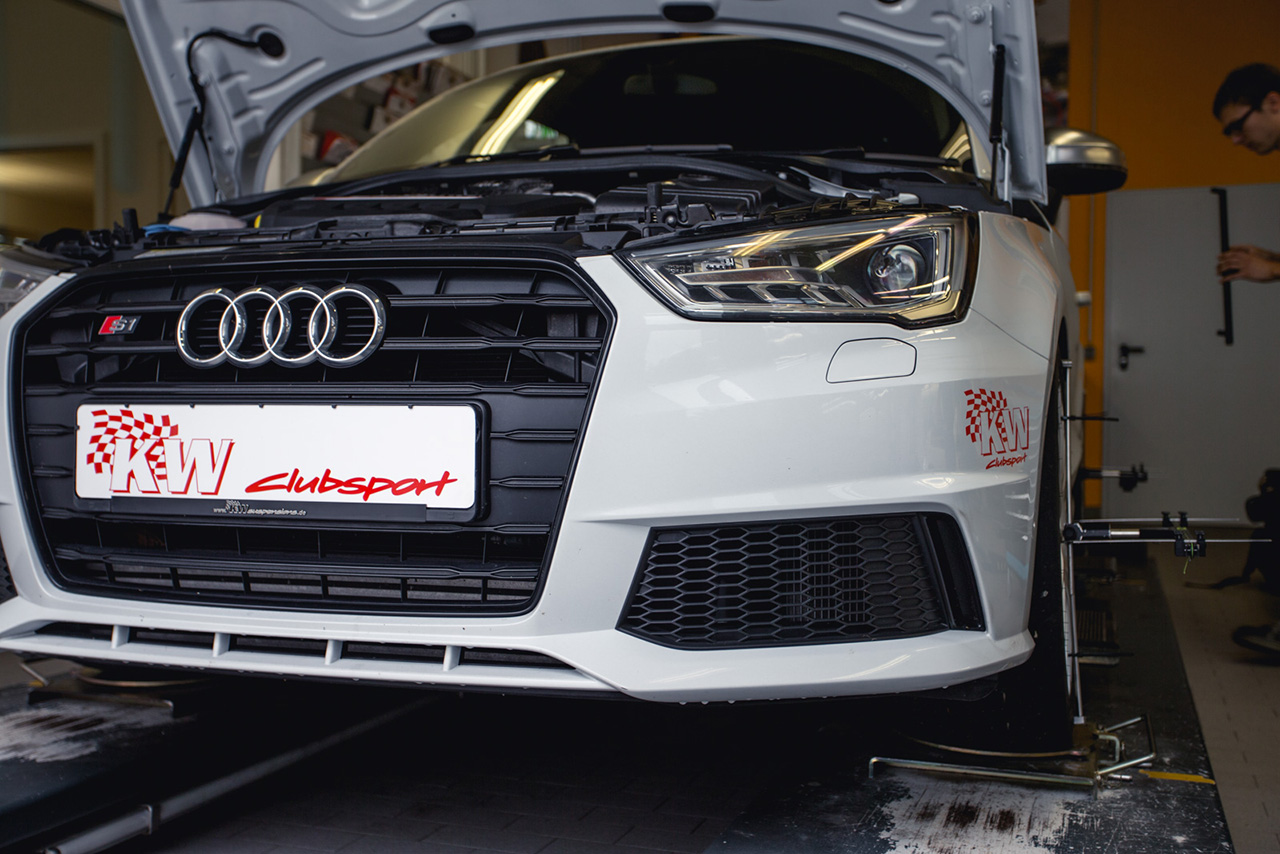 So why was the S1 quattro chosen for this particular task? Partly as Richard had driven one and thought the standard car’s handling a little inert and, dare we say it, dull, and partly as the baby Audi lent itself to the full ‘Clubsport treatment;’ suspension, half-cage, stripped out rear, bigger brakes and semi-slick tyres. It was just too tempting a proposition for Richard and the rest of the KW gang to resist, and it wasn’t long before a brand new example was winging its way toward the firm’s UK HQ. Upon delivery the car was pressed into action at Brands Hatch, a move which rather confirmed Richard’s suspicions about the S1’s handling; 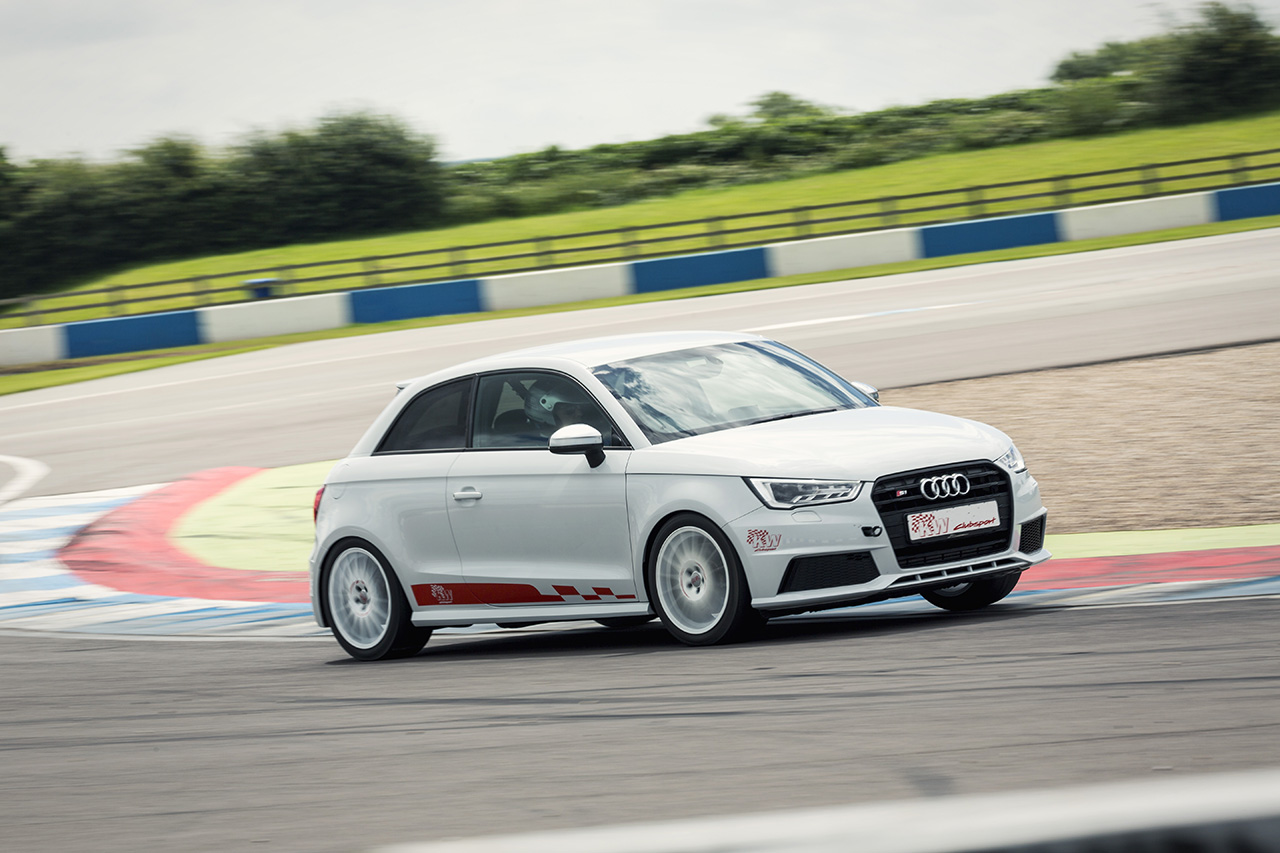 “It was fast and very grippy of course, but there was far too much understeer for our liking and the whole package was in danger of feeling a little dull. There was certainly work to be done, and it was that our Clubsport package would be the best way to go about doing it.” 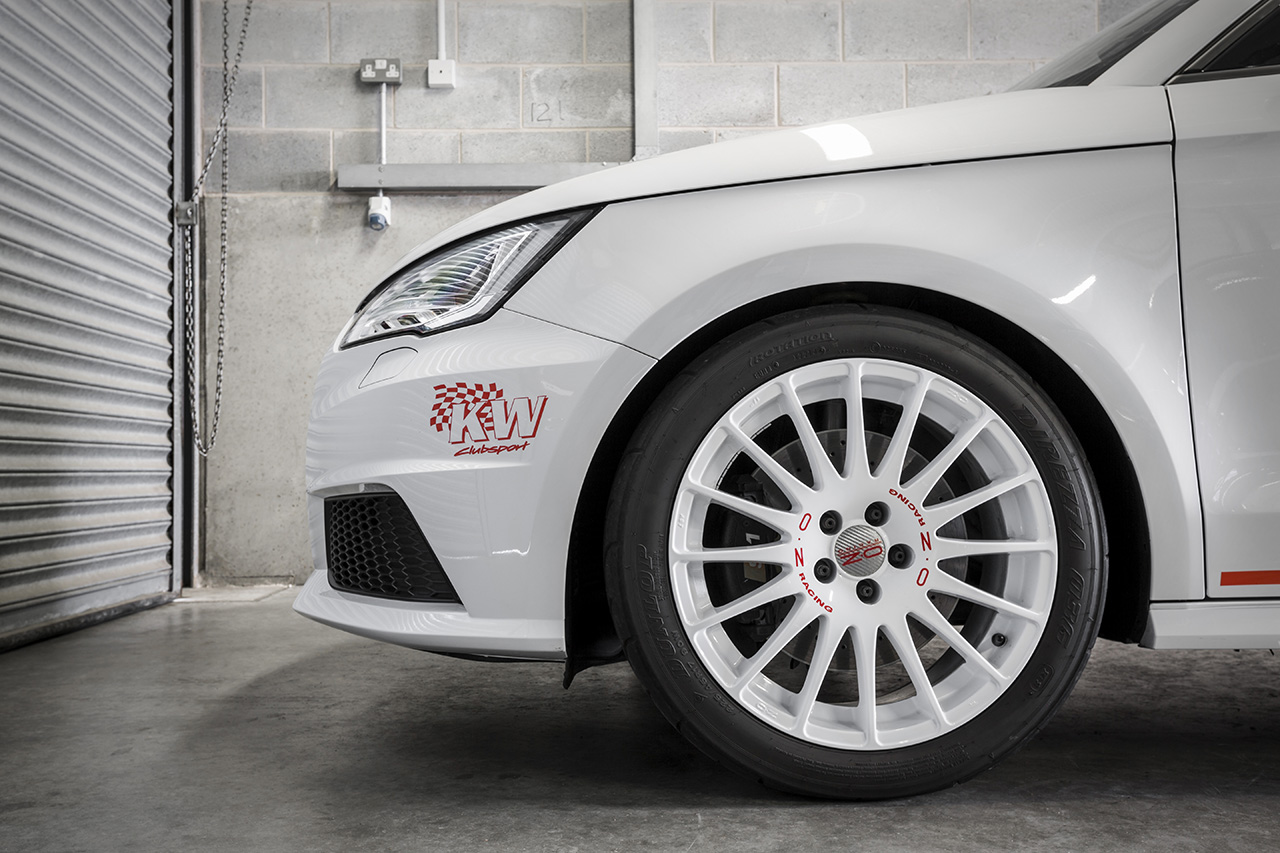 The key to the KW Clubsport kit’s multifaceted ability lies in its construction, namely its three-way adjustable design and racing valve technology. Similar in principle to the arrangement that’s been proven to work so well on its V3 kits, the KW race valve technology within the Clubsport really does take things several stages further by allowing for 16 different rebound adjustments to be made (again via a wheel), plus the option of toggling the compression settings in both low speed (6 clicks) and high speed (14 clicks) stages. 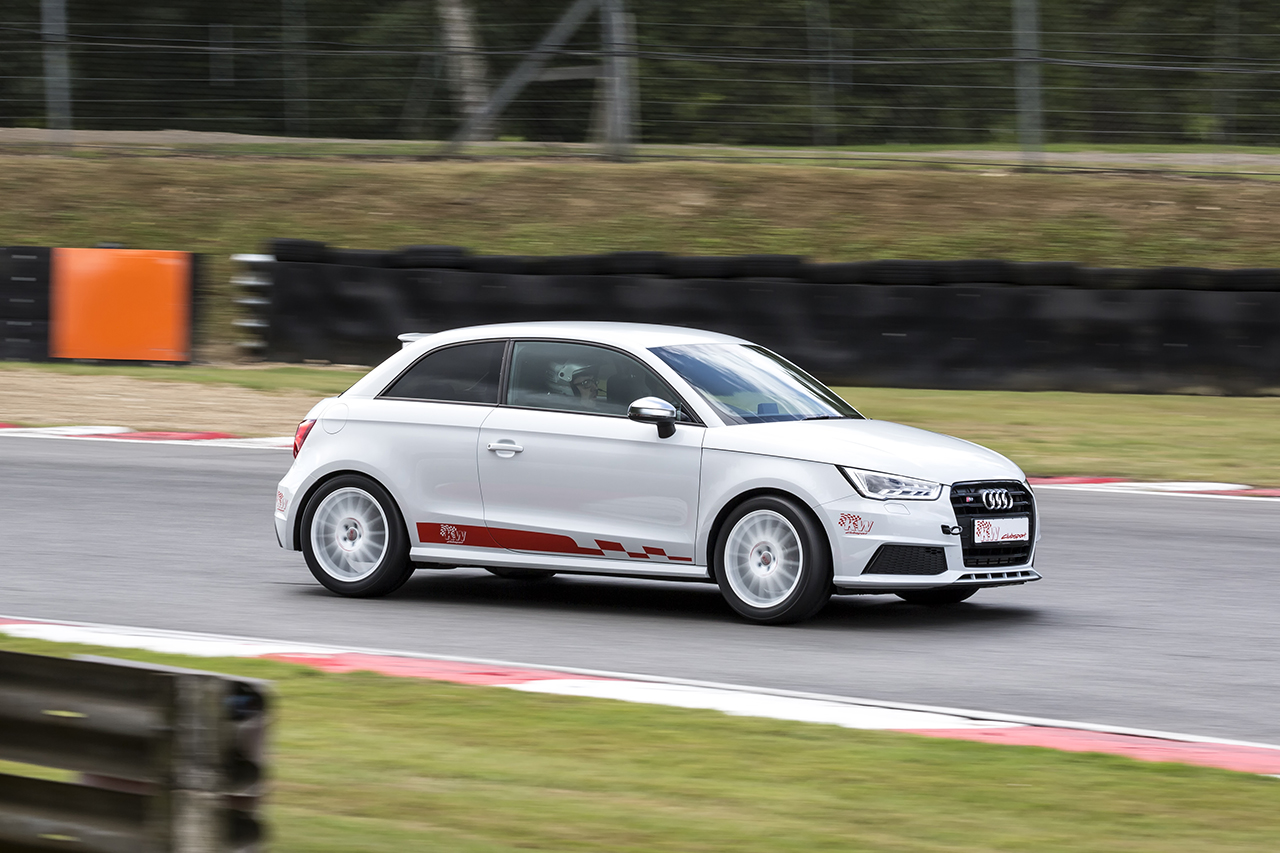 The benefits associated with independent damping adjustment and lowering are hard to overstate. It effectively allows drivers access to a dizzying array of adjustment possibilities, in turn meaning they can tailor their specific car to better suit specific corners on certain circuits, or even to take make full advantage of other performance-orientated components, semi-slicks, uprated ARBs and roll cages being but three examples. 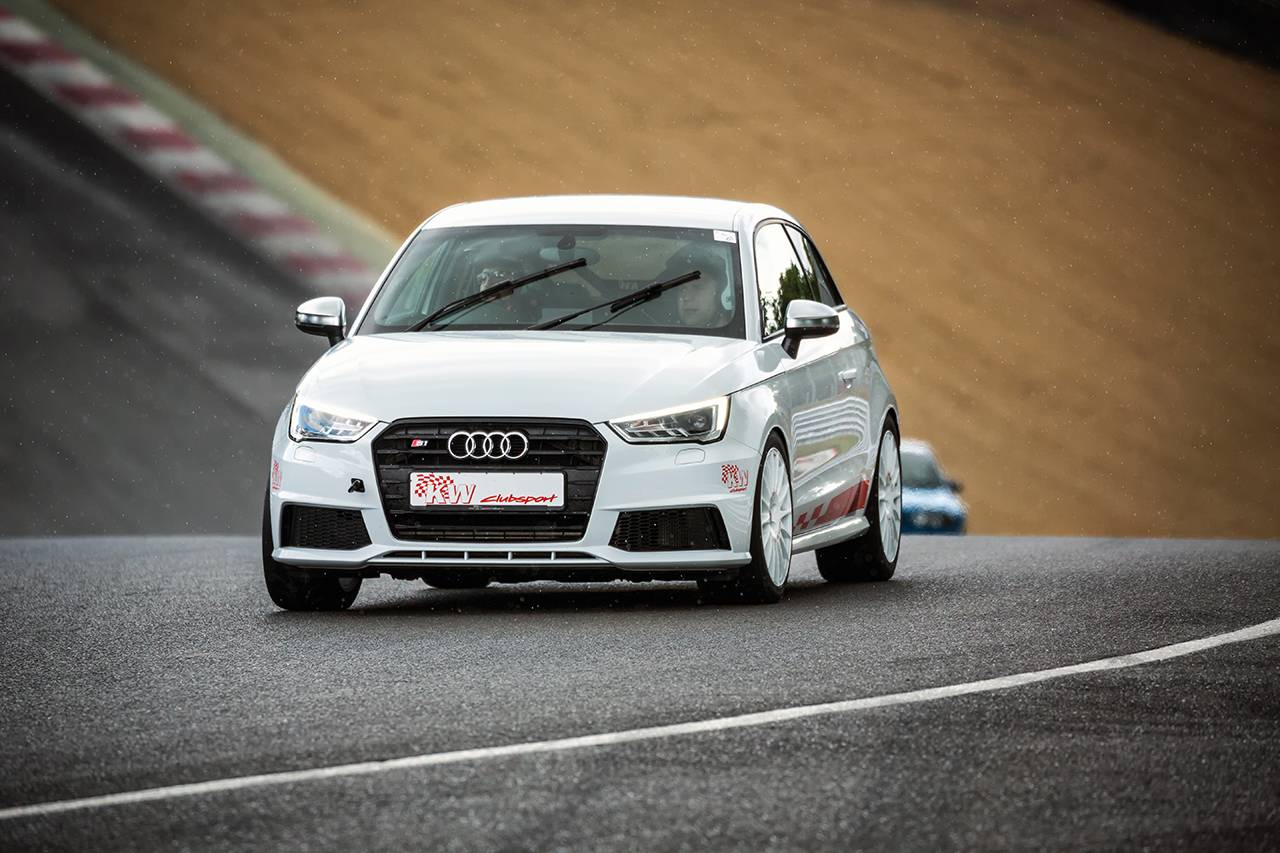 Factor in other Clubsport traits like Uniball top-mounts, a feature which permits camber angles to be altered with the suspension still on the car, in turn allowing the amount of contact the tyre has with the ground, and it becomes clear why this package was ideal for the baby quattro. 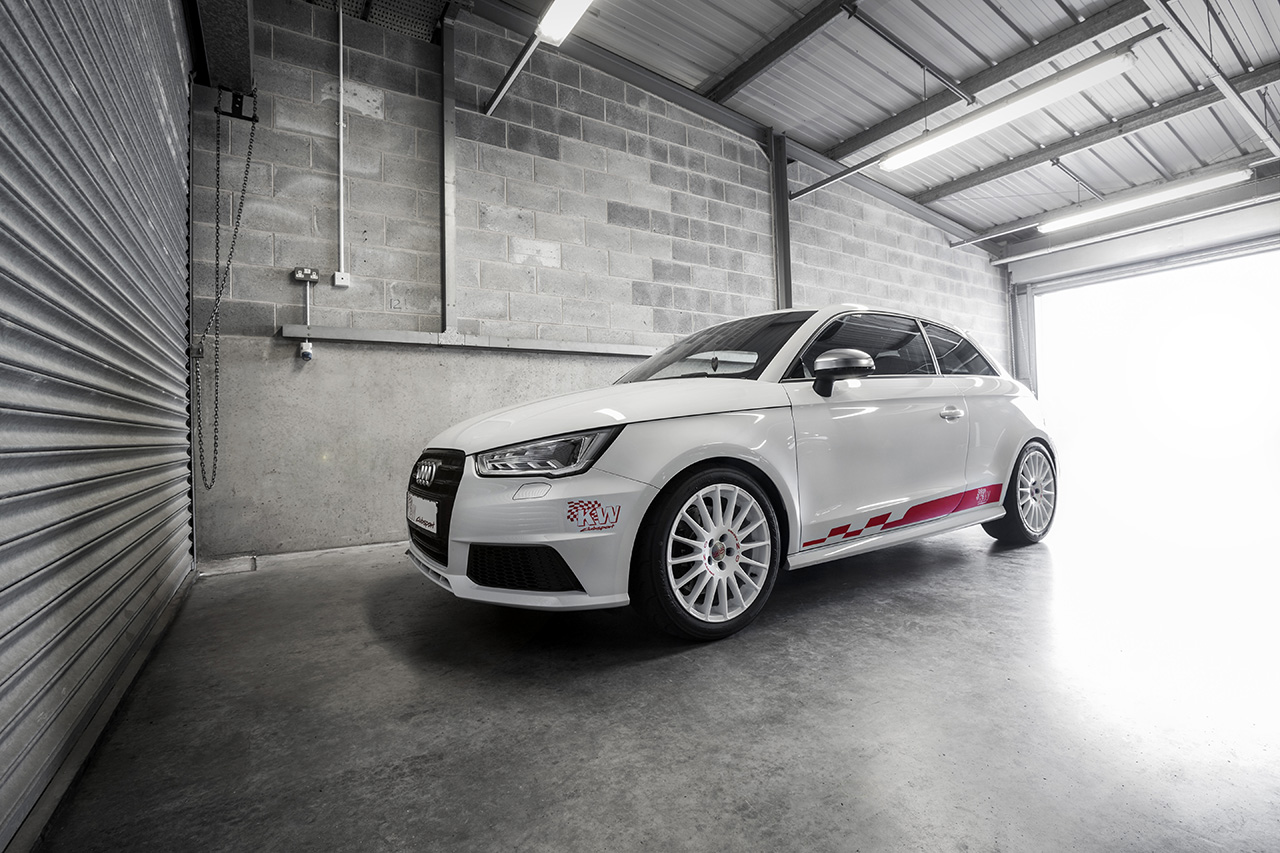 Despite the kit’s polished nature, it was far from perfect for the S1 right out of the box. The newly Clubsport-shod Audi was handed over to Marc Kemp, KW’s test driver, Time Attack competitor and Nurburgring veteran, for another morning of testing at Brand Hatch, and the results were somewhat mixed. 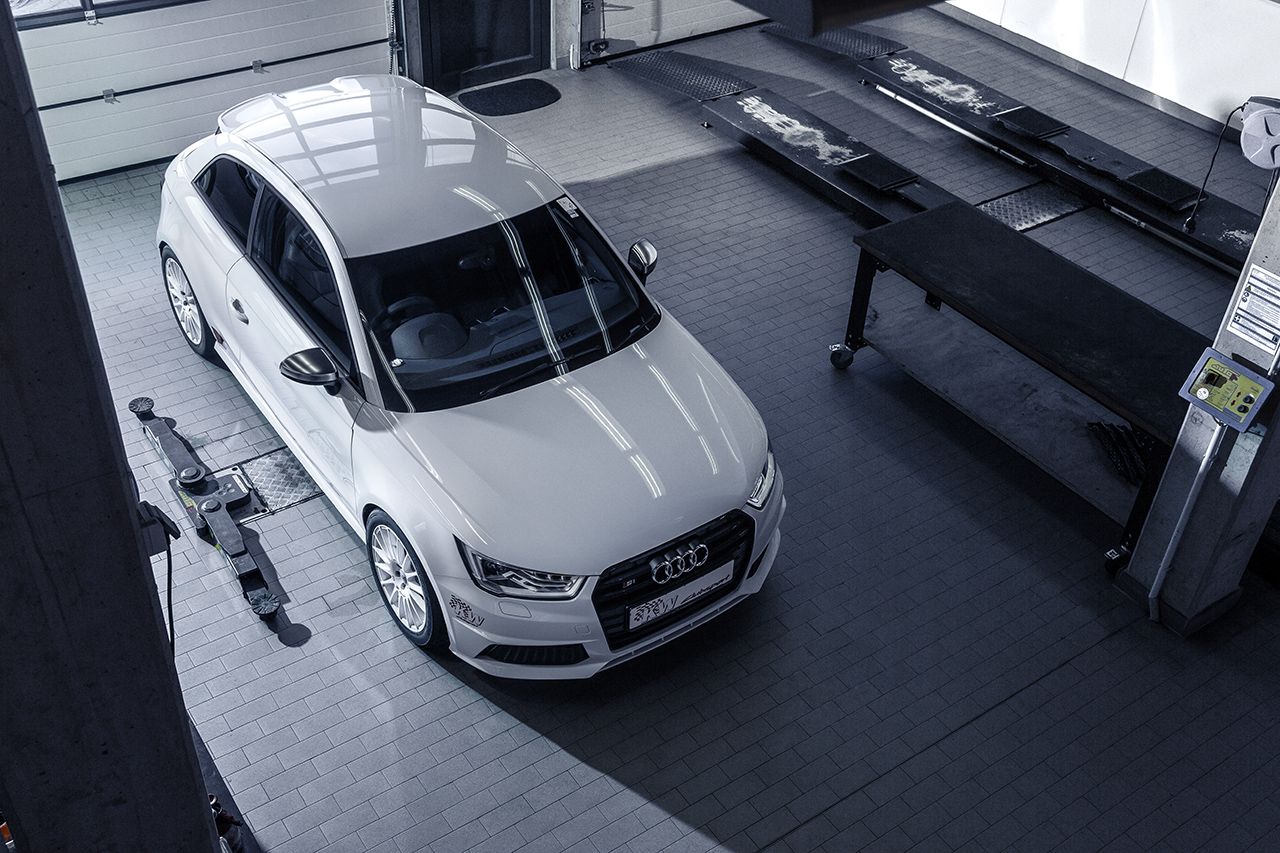 “Marc was positive overall but did identify a number of key areas where improvements could be made, namely the back springs – these needed to be far, far stiffer if he was to ever have full confidence in how the rear of the car was behaving. We also found that if the rear end squats to a certain point, it trips a sensor and the ECU puts the car into limp mode – not what you want on track!” 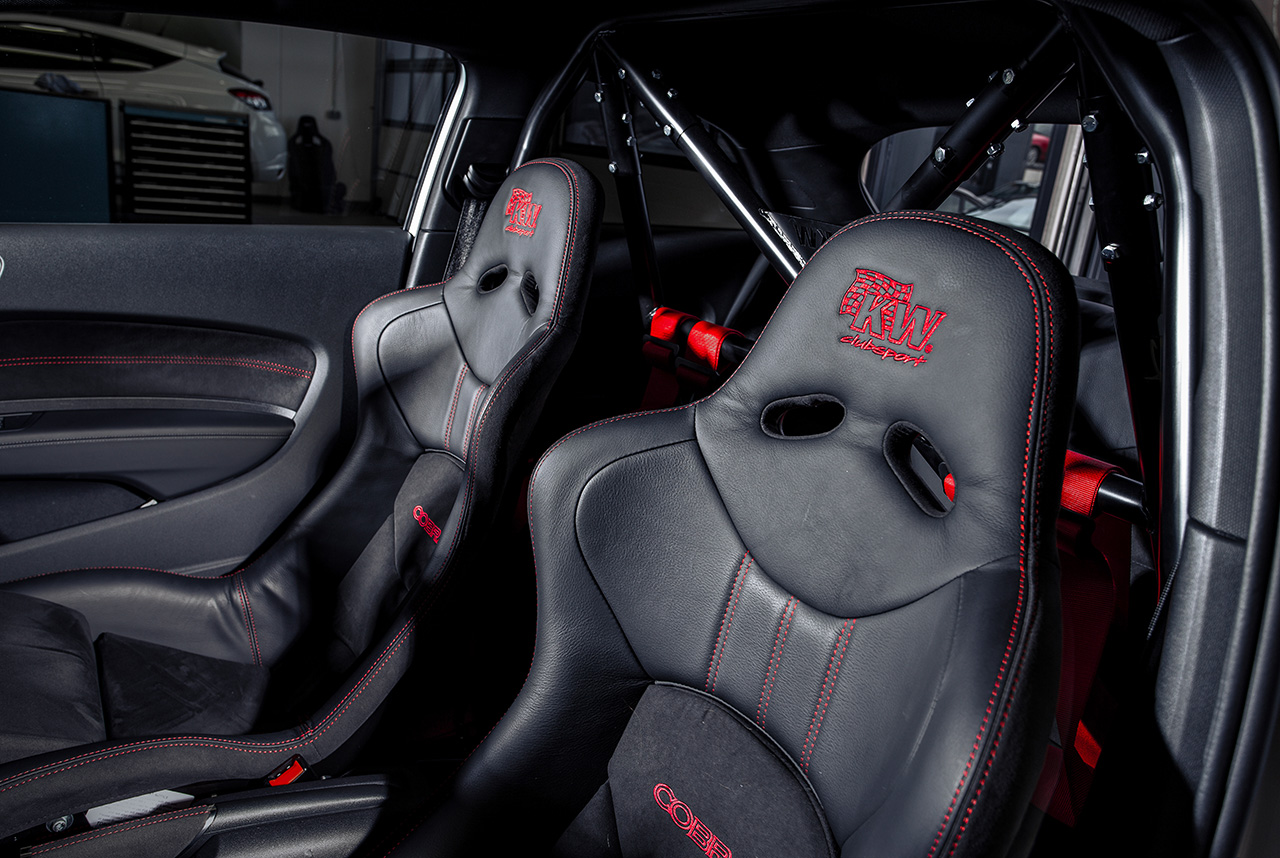 A smattering of other upgrades also found their way onto the car, all of them tasked with subtly enhancing rather than fundamentally altering the S1’s character. This explains the buttock-hugging Cobra bucket seats now sitting up front, the Wiechers half-cage (a nod to the S1’s dual purpose life of part time road and race car), and a Revo remap. The latter was pretty much a given – Audi’s TFSi engine has risen to prominence amongst the tuner community and there are a dizzying array of ECU packages for it. The result? A none too shabby 320bhp with over 360lb/ft of torque, a figure no doubt helped by the addition of a turbo-back Scorpion exhaust and trick Revo inlet tract rendered in carbon fibre. 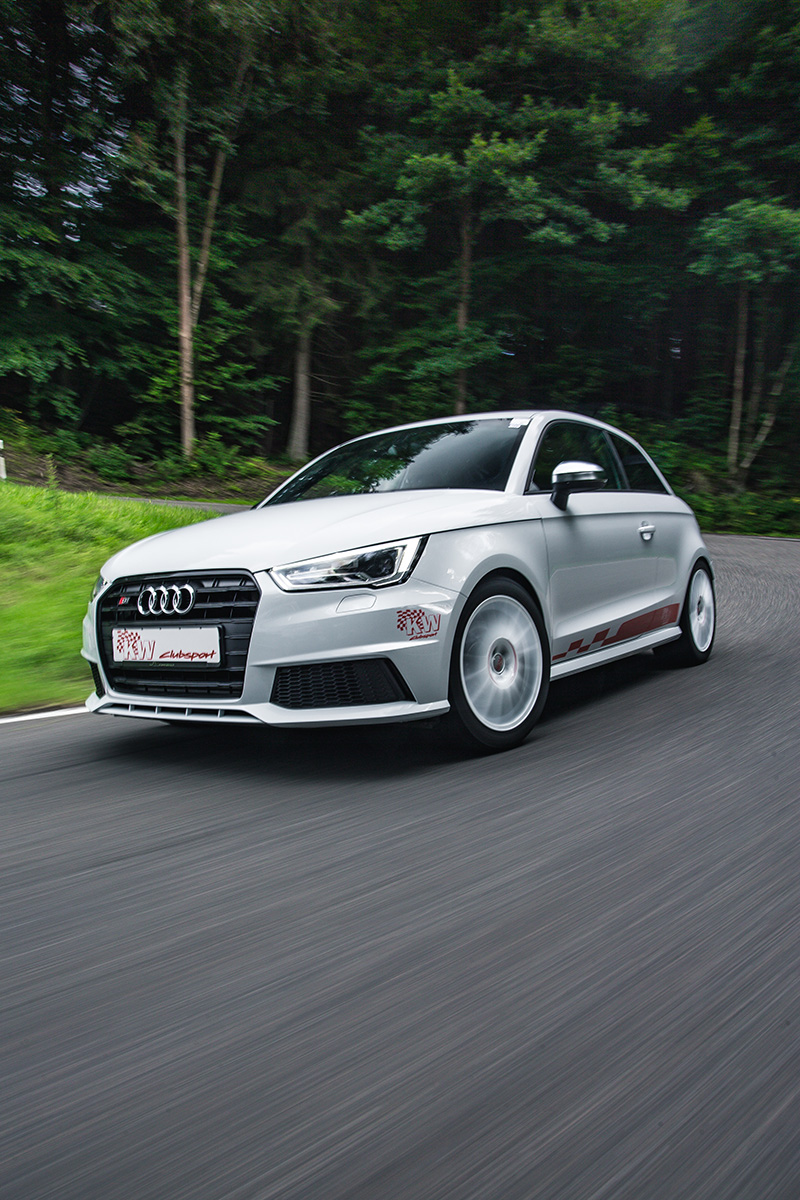 Brands Hatch is all well and good, but as every true petrolhead knows there’s one track that stands head and shoulders above the rest when it comes to testing a car’s mettle, and that the Nurburgring. The pressure had also been turned up a couple of notches: Marc would certainly be unflinching in his criticism if warranted, while ‘the ring’ is perhaps the globe’s most public proving ground – there was nowhere to hide and plenty of attention focussed on the KW car. 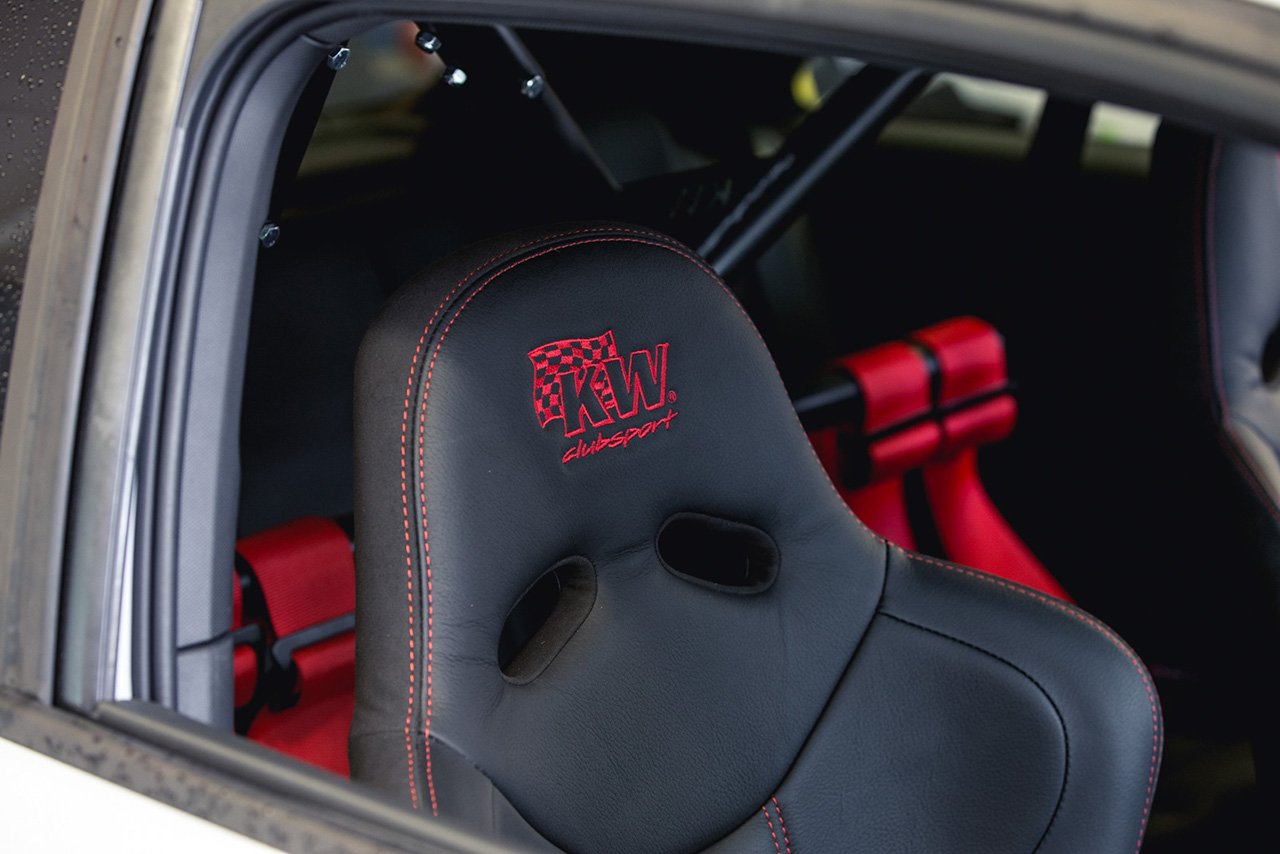 KW set about the project with gusto, shipping the S1 to the guys at Raeder Motorsport for a comprehensive chassis setup. This ultimately saw the spring rates, toe, castor and corner weights all tailored to the Nordschleife’s notorious assortment of undulating crests and off-camber bends, giving Marc and the car the best possible chance of success. 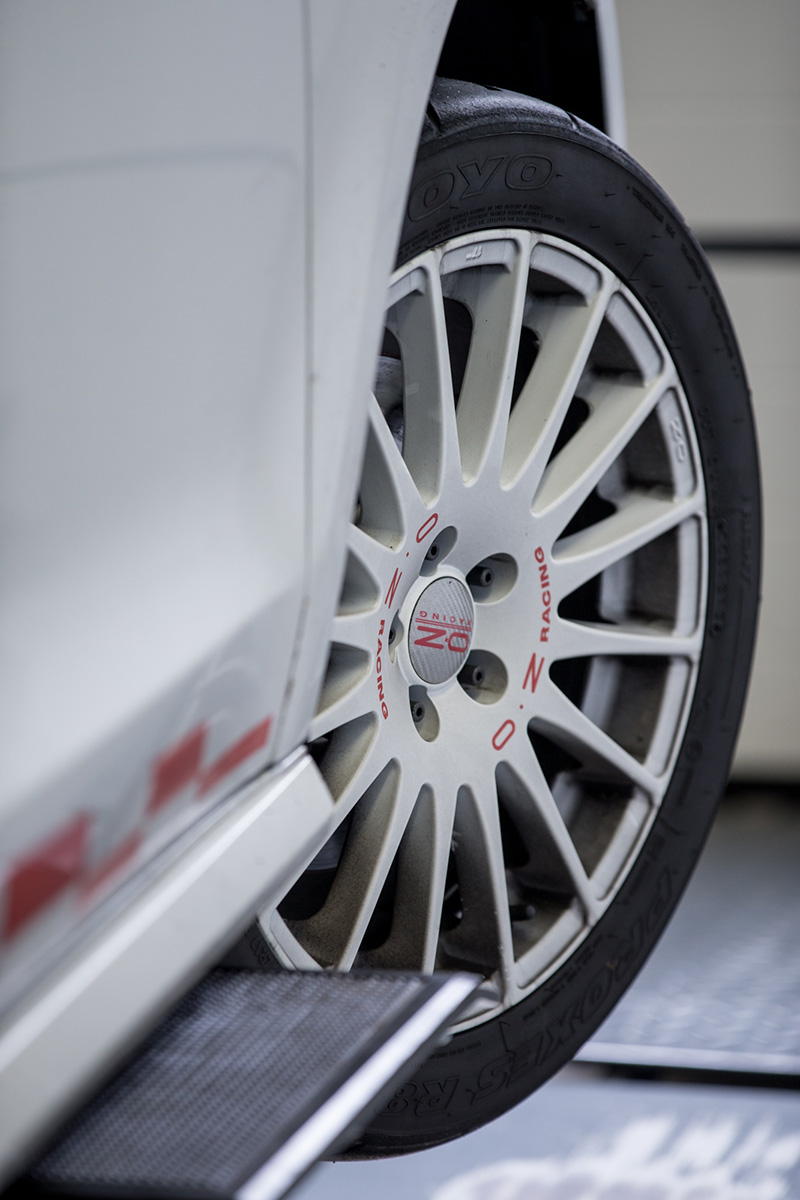 The proof of the pudding, as they say, is in the eating, which meant that everyone associated with the S1 project was forced to wait with baited breath while Marc took to Germany’s most famous ribbon of tarmac for the first time. Not they need have worried, as both car and driver were in perfect harmony: Marc was swift to get to grips with the S1, commenting on the revisions and noting that they’d made a massive difference to the manner in which it drove, and noting that they even allowed him to go toe-to-toe with cars which were, on paper at least, far more capable. 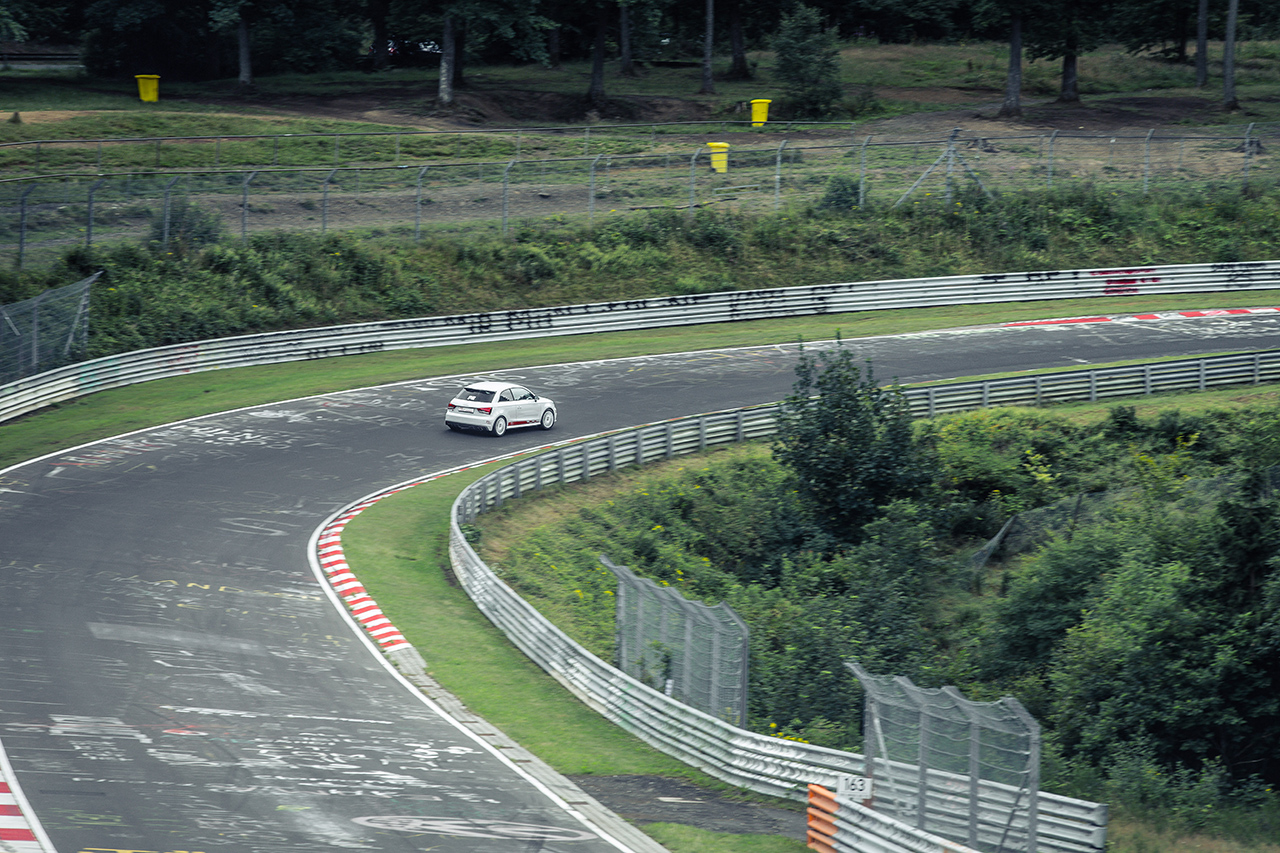 “Obviously the S1 was never going to be able to see off Ferraris and Porches on the ring’s long straights, but it was more than capable of making back the time on the technical, twisty sections, and I place a lot of that directly at the feet of KW and the Clubsport package,” explains Marc. 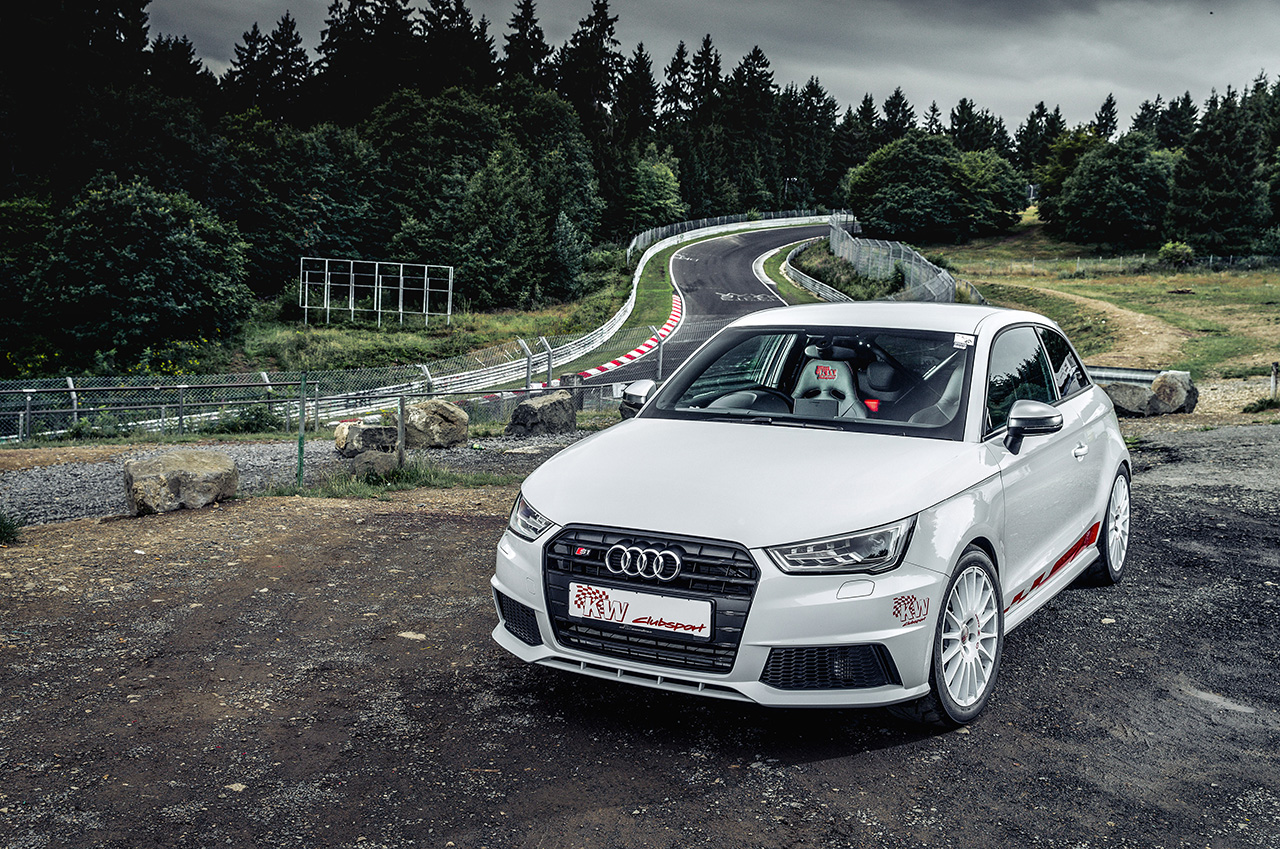 The Clubsport ethos which underpins this car is the key to its success, and it also means that Rich and the rest of the KW team had to think carefully about each and every modification they made. It would’ve been all too easy for them to have fitted a larger aftermarket turbo setup, a super aggressive remap and much else besides, and the result would no doubt have been spectacular, but it wouldn’t have been a Clubsport car. No, the revisions the team have chosen to apply have all been picked for their ability to enhance Audi’s basic formula, and the results speak for themselves. It means that not only is this one of the best rounded S1 quattros around, it’s one that has even more right than most to wear its iconic badge with pride!