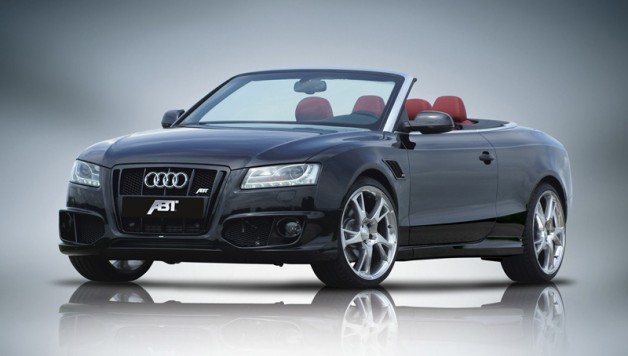 Sportiness and elegant design are not mutually exclusive – at least when the designers at ABT Sportsline are involved. “It is important to capture the character of the car and emphasise its uniqueness”, says Hans-Juergen Abt, the General Manager of ABT Sportsline explaining the demands which are made on the creative department.

The result is a breathtakingly beautiful cabrio, which is recognisable as a real “Allgäuer” not just due to its typical 4-pipe exhaust unit. The front with the ABT grill, which additionally accentuates the area around the headlights and fog lights, the front apron and the side sills – all give the open AS5 even more presence. The rear apron and exhaust unit perfectly suit the optics of the extraordinary vehicle. To round of the successful appearance ABT recommends the cool bold BR alloys in 19 or 20 inch respectively. The company from Allgäu of course also offers complete wheel sets with high-performance tyres.

The AS5 Cabrio is a fresh air sports car, which is also quick in a tailor-made suit. The technicians at ABT Sportsline ensure this. There are currently four performance increase packages available: with ABT POWER, which is the optimisation of the electronic engine management system, the 2.0 TFSI receives a sporty 275HP (202kW) instead of the serial 180 HP (132kW) or 211HP (155kW). With the 2.7 TDI, 190HP (140kW) become a high-torque 230HP (169kW). With the three litre diesel this is increased to 282HP or 207kW (series standard: 240HP / 176kW). The ABT POWER S technology is also available to the V6 diesel with the largest engine capacity, which also employs an ABT turbo charger. 310HP (228kW) then provide superior handling in all situations, and with 610Nm torque it’s full steam ahead. Logically this power also has to be restrained. The ABT braking unit or ABT sports braking unit correspond to the additional performance potential of the AS5 Cabrio and provide the necessary safety reserves in borderline situations.

The open AS5 provides enormous driving enjoyment, especially of course when the sun is shining. But even with the roof closed the beautiful cabrio looks extremely cool. Regardless of whether it is a car for leisure or business – the latest addition from ABT Sportsline is the ideal companion in all situations.