Those clever boffins at Milltek Sport have been at it again! As if the firm’s ValveSonic and Hollowtek systems weren’t enough to turn the aftermarket on its head, its latest product development offers something completely different once again; cast downpipes. But what are they – and why should we all be getting so excited by this new technology? 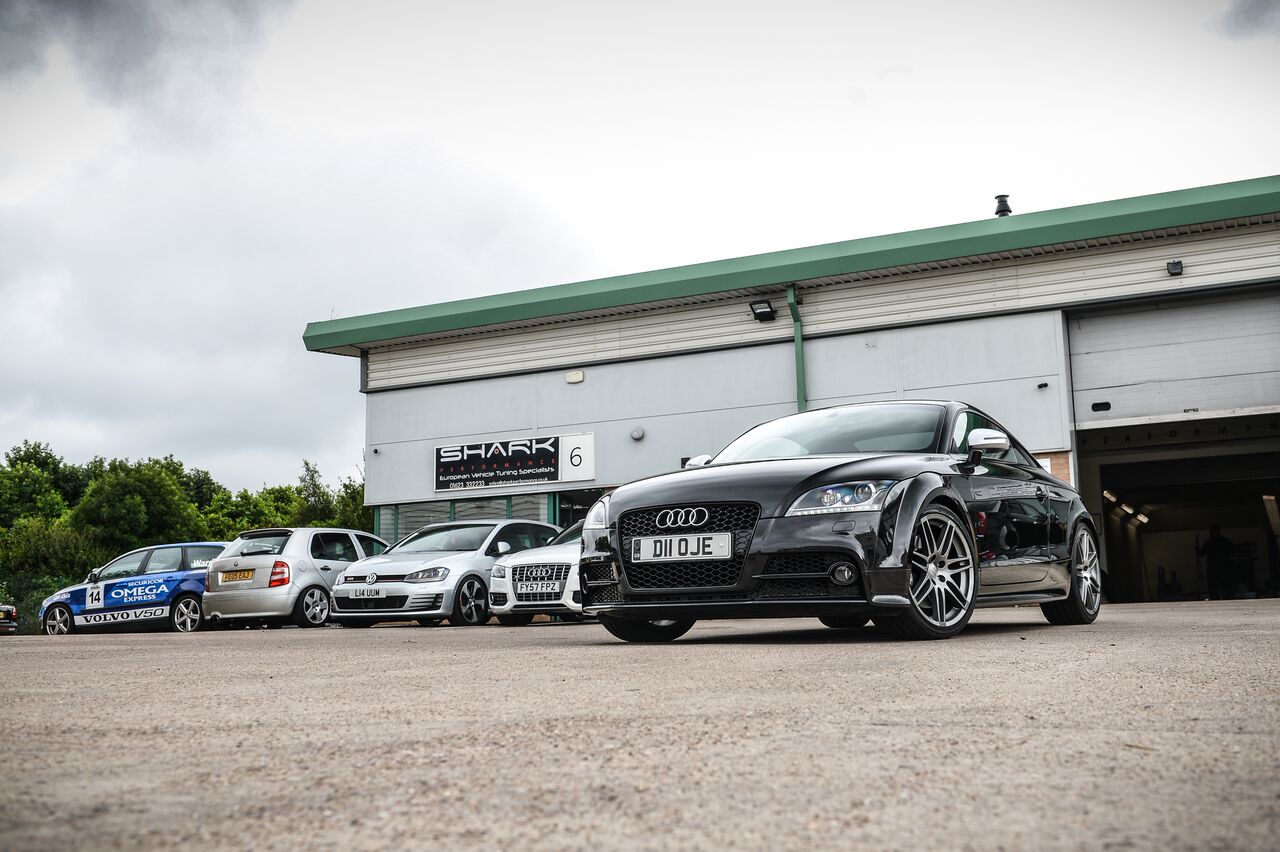 If you were being argumentative and stripping back to engineering basics, you might contest that an exhaust system really is one of the most simple of components on any car. In its purest form, it’s merely a section or two of bent pipework with a few flanges or slip joints at each end, and a bit of perforated tube and fibreglass somewhere in the middle. How hard can it be to make one? For many systems, that’s probably true, but for a few select brands at the top table, they don’t like to keep it simple at all. Quite the opposite, in fact. As a case in point, a glance at Milltek’s website reveals the firm bringing the latest electronic valve integration software and actuation to its systems along with exciting new methods of hollow construction that reduce weight and improve sound. For brands like that, exhaust design has become a ground- breaking endeavour of engineering that continually pushes the boundaries of what’s possible. 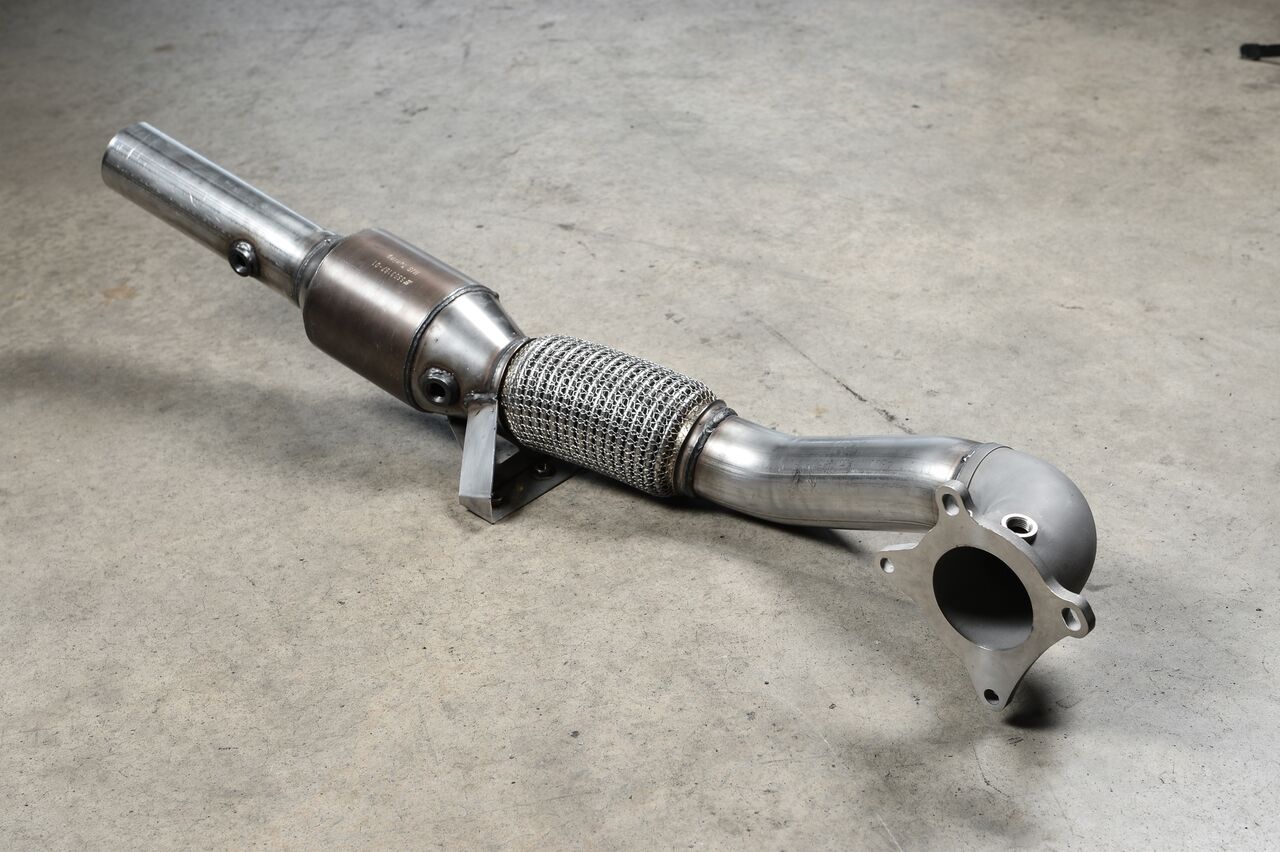 A great example would be the Derbyshire firm’s approach to downpipe design. In the past, even the most exotic systems would usually be constructed from a high-quality, mandrel bent stainless tube – and indeed, there’s nothing wrong with that at all, but as with all avenues of engineering, there’s always a better way around the corner. Just as carbs were replaced by injection, and cross-ply was superseded by radial, downpipes have a new holy grail, in production terms. And that, my friends, is casting. 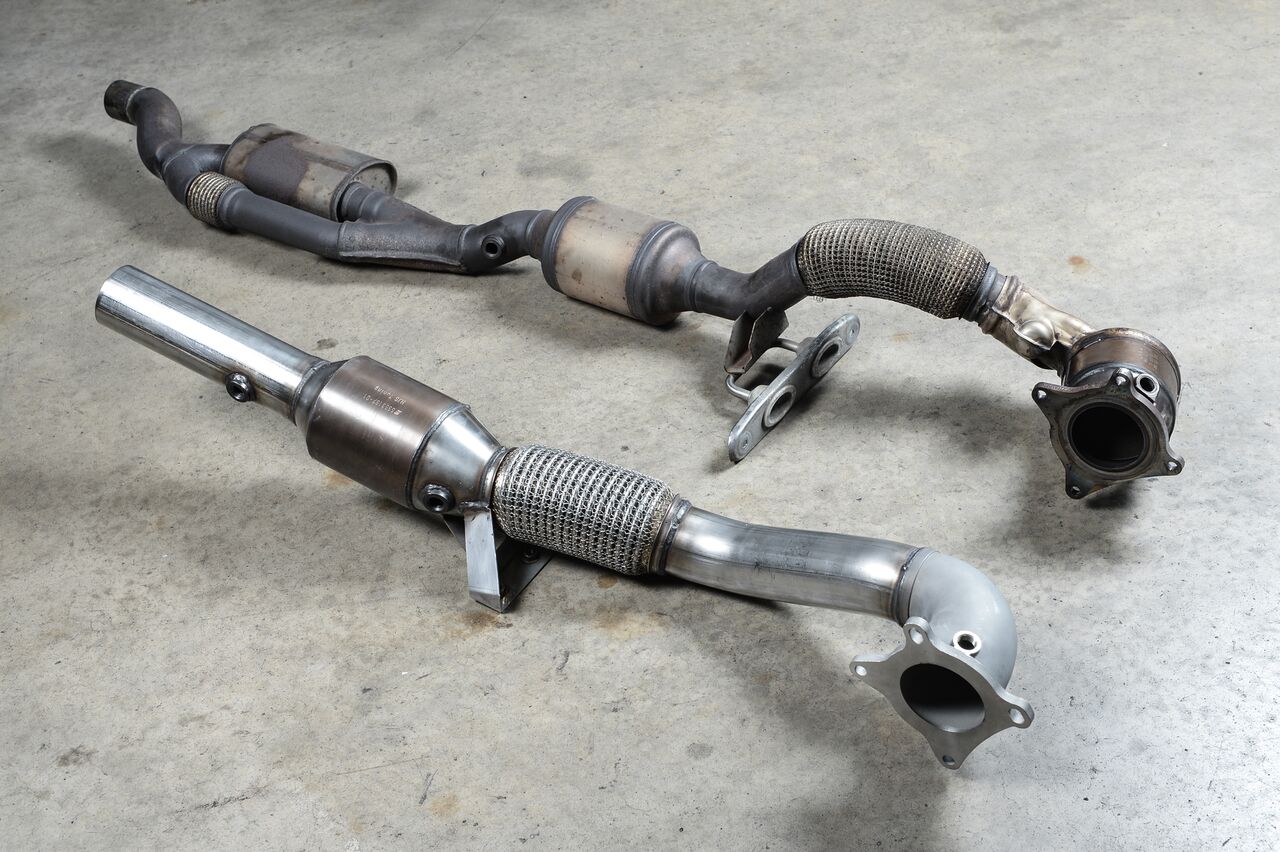 Casting gives many advantages over traditional methods. It offers greater integrity of finish, better fit, superior gasflow and enhanced acoustics. Being CAD designed and manufactured cast downpipes can be made to millimetric and robotic precision, and as an added bonus, they also handle heat cycling much better than their tubular equivalents. Naturally, tooling up and investing to make them takes much more bravery, but then Milltek has never been a brand to shy away from pouring money into R&D in order to make something better, as the firm’s impressive list of recent innovations proves. 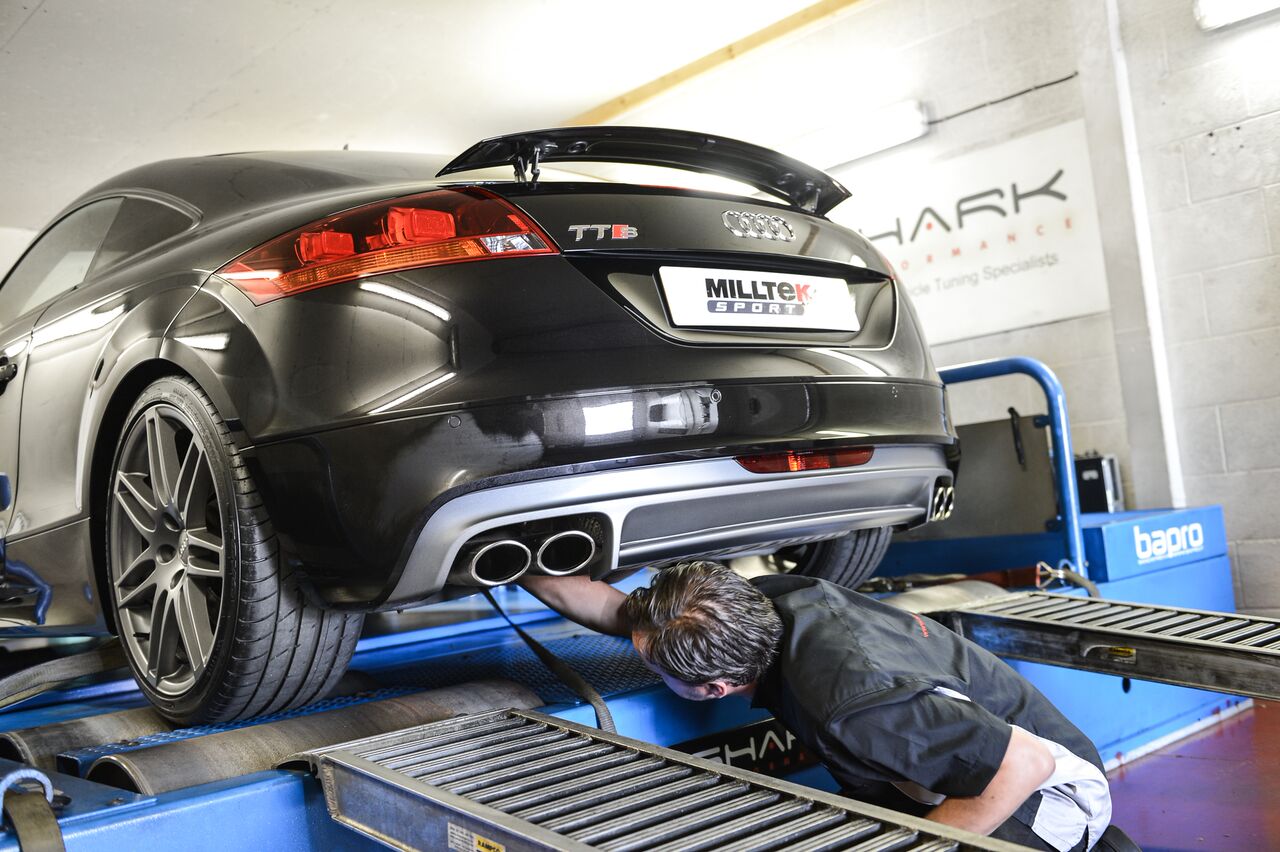 If that wasn’t enough, Milltek has also taken the chance to equip many of its new designs with “OEM” style soft flexi sections to improve durability and reduce the transfer of unwanted noise, harshness or vibration into the cabin, in addition to making their race-proven range of HJS 100 and 200 cell sports catalysts a tickable option for those that like to go faster with the full approval of the law. 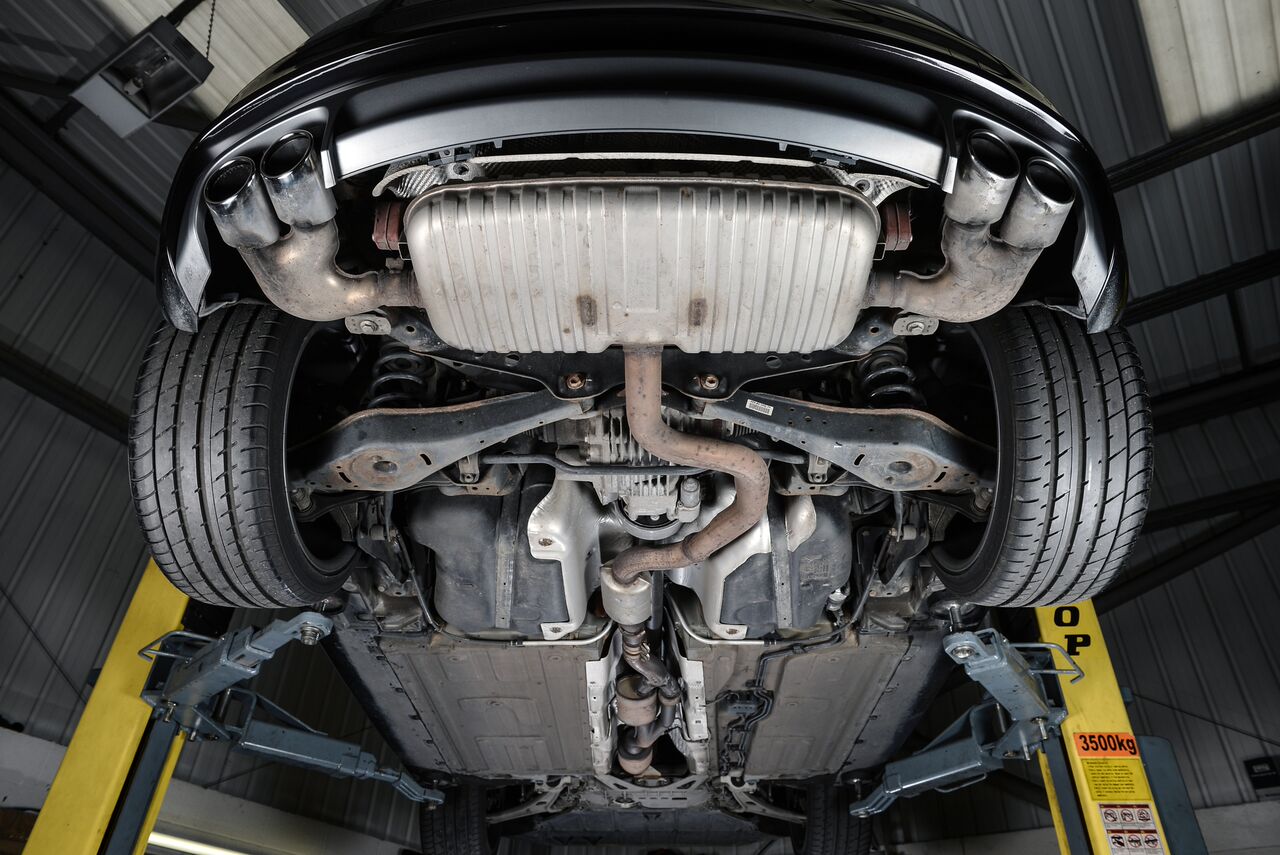 On paper then, Milltek seems to have covered all the bases. However, theory is one thing, and real, hard, empirical results are another. Keen to find out what kind of numbers this new-fangled technology could generate, we accepted an invitation to enjoy the talented chaps up at Shark Performance in Mansfield as they did some final beta testing on the system prior to launch. Shark, under the watchful eye of founder, Ben Wardle, has become a trusted resource for both trade and public customers over the last few years. As the key-tappers behind the maps of many race-winning VAG rides – and the no-nonsense engineering brains behind literally thousands of fast road conversions, the Shark team knows a thing or three about extracting safe and useable power from anything with an engine. 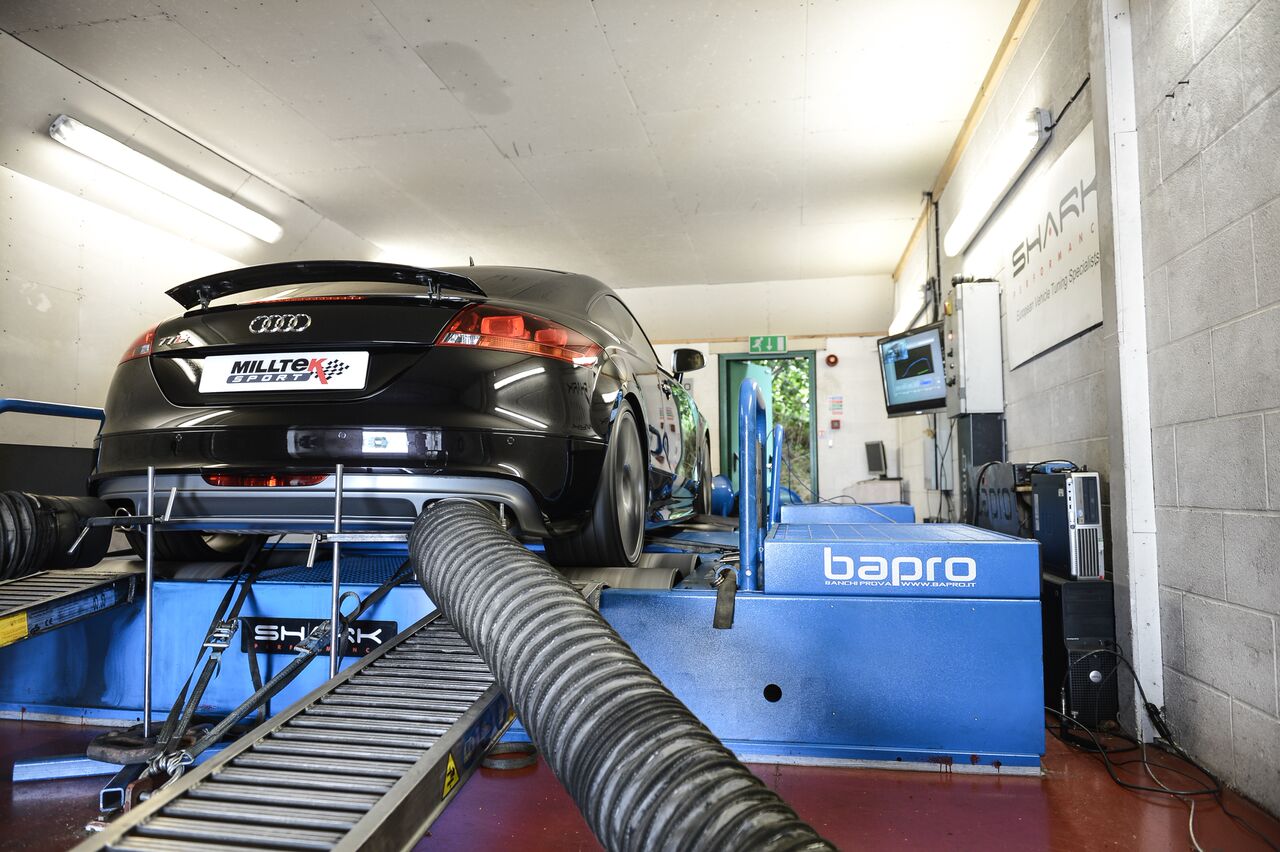 Shark’s impressive facilities include an in-house dyno cell for consistently replicable results, so the patient in question this time, an Audi TTS coupe, would be able to provide some truly useable figures to assess the efficacy of the new parts. 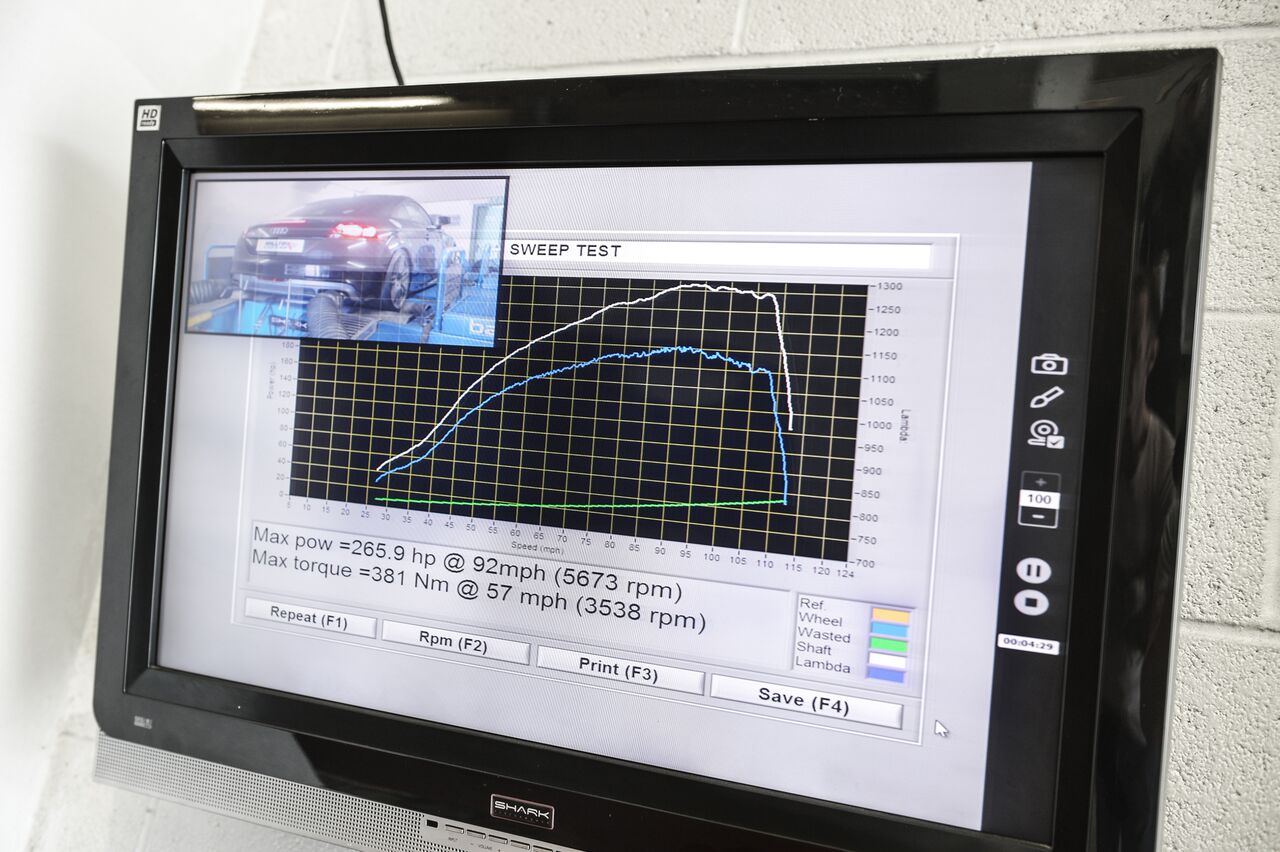 Naturally, several runs would be taken in each state of tune, across the range of ambient temperatures during the day and averaged out to get as close to a perfect data set as possible. After each run, Ben also ensured that the car was allowed to cool, so no heat-soak from the static, warm engine could potentially skew any figures on subsequent runs. 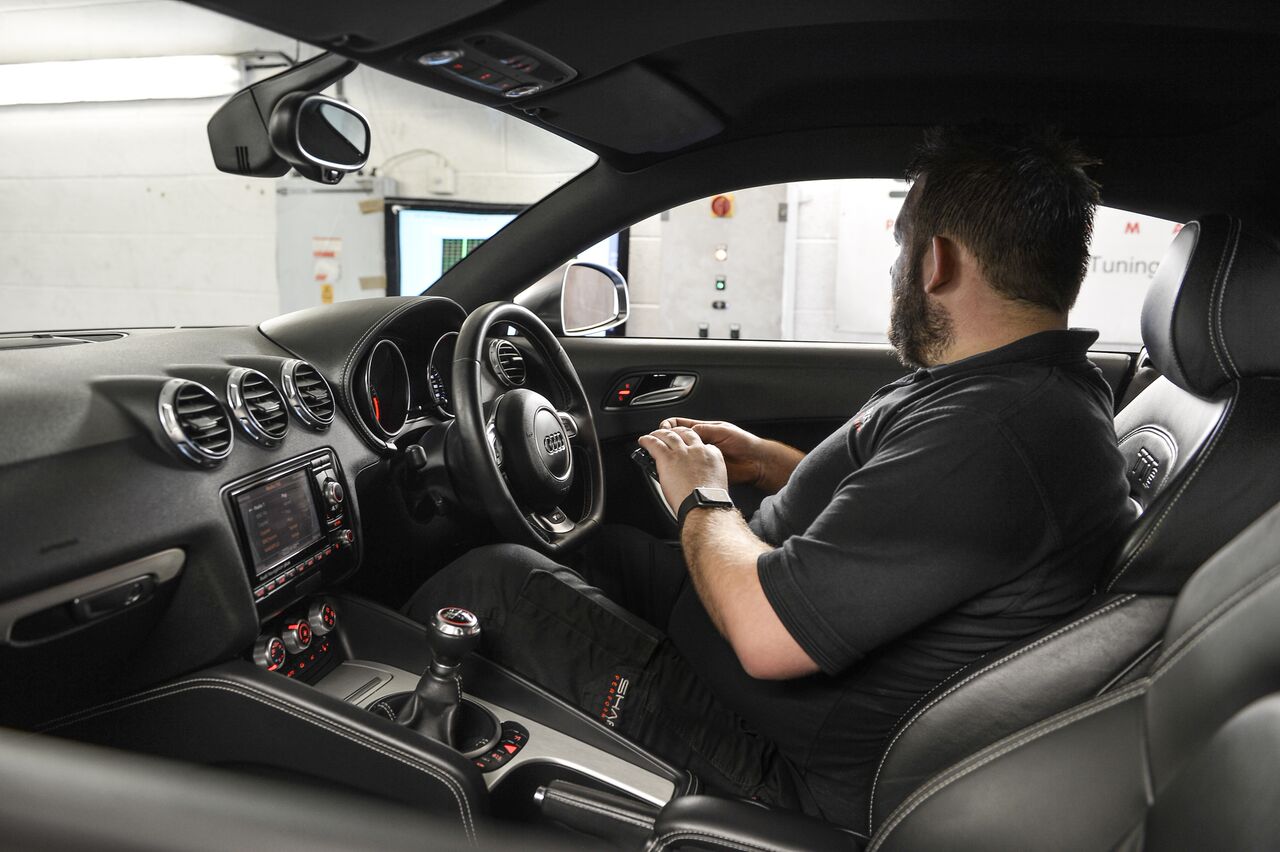 To begin, a baseline set of runs established that the stock car was putting down a non-too-shabby 189.57 bhp at the rollers. A figure that many of us would be happy to commute with! Once it had sufficiently cooled, the OEM downpipe was removed and compared to the new Milltek design. Side by side, it was clear to see the number of desirable factory design cues left on the new parts; the exact orientation of the flanges and the flexi joints and position of key components. But, what was clearly superior, even to the naked eye, was the diameter and routing of the pipework. Even before the system was bolted and torqued, and the dyno run again in anger, it was evident that the spent gasses were going to have a much easier task of egressing the engine – with inevitable results. 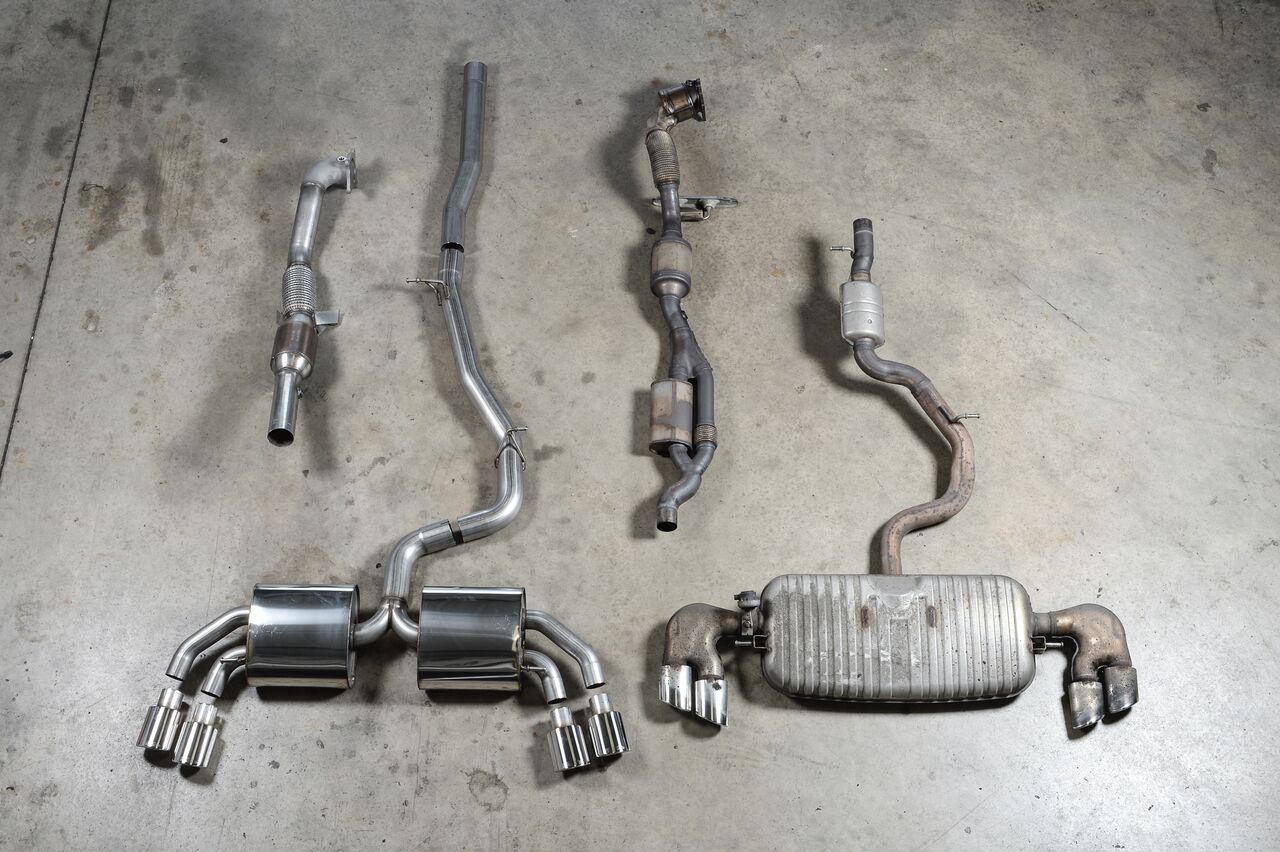 Running an additional full set of runs netted an impressive dyno trace. Running on completely standard software and the same tank of fuel, the TTS, with its new found aerobic capacity, managed to notch up a healthy 206.44bhp under the same conditions. An increase of almost 17bhp. Not a bad place to start, particularly when you factor in the increased temperature in the dyno cell at this point in the day. 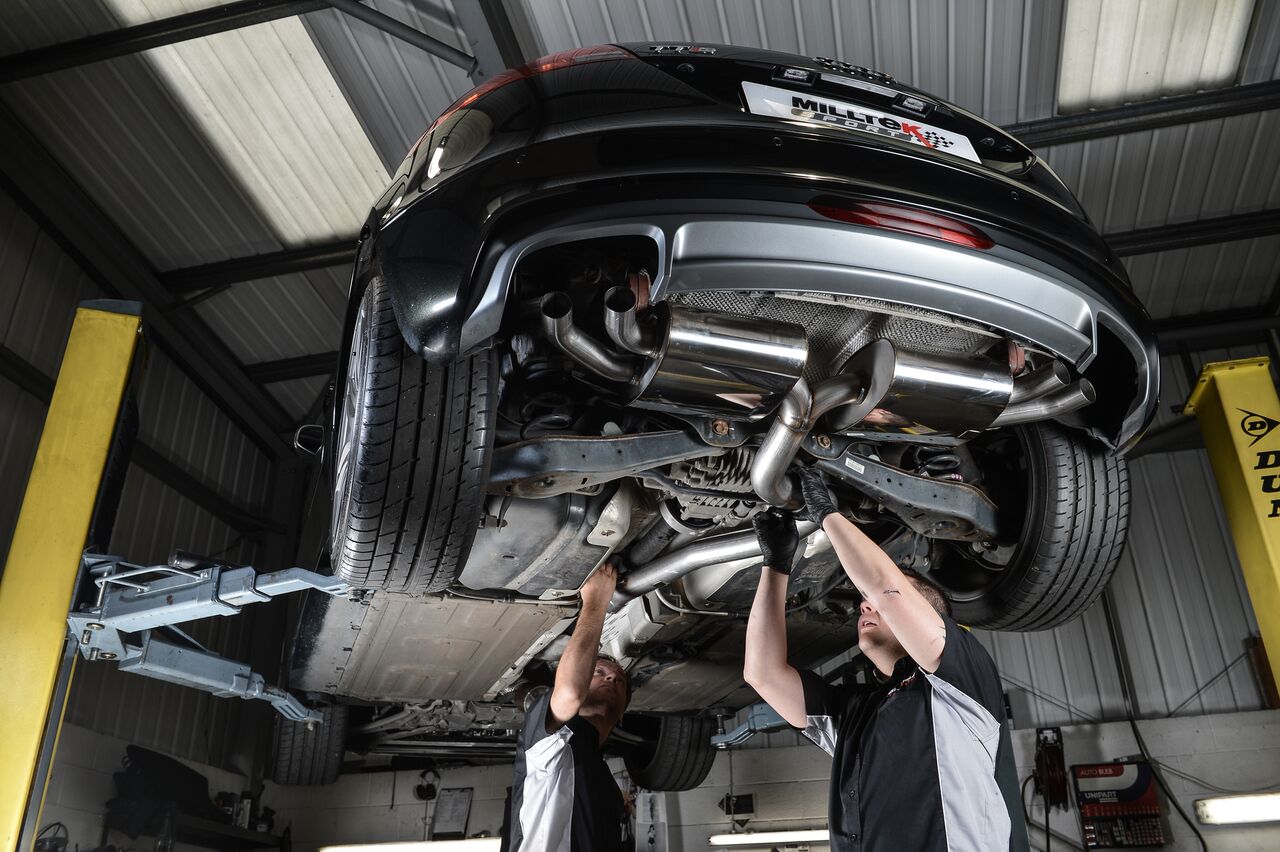 These bare numbers only told half the story though, as Ben excitedly explained, talking us through the graph as he did so. “This new turbo back has given pretty impressive gains in unmapped trim,” he mused. “Forget the numbers though, look at the graph – particularly the response low down where the turbo now exhibits far less lag and offers a much crisper throttle at lower RPM. That will really equate to a car that’s going to be much, much quicker in the real world, for a simple bolt-on mod. There’s no doubt that this definitely works 100% for this drivetrain.” 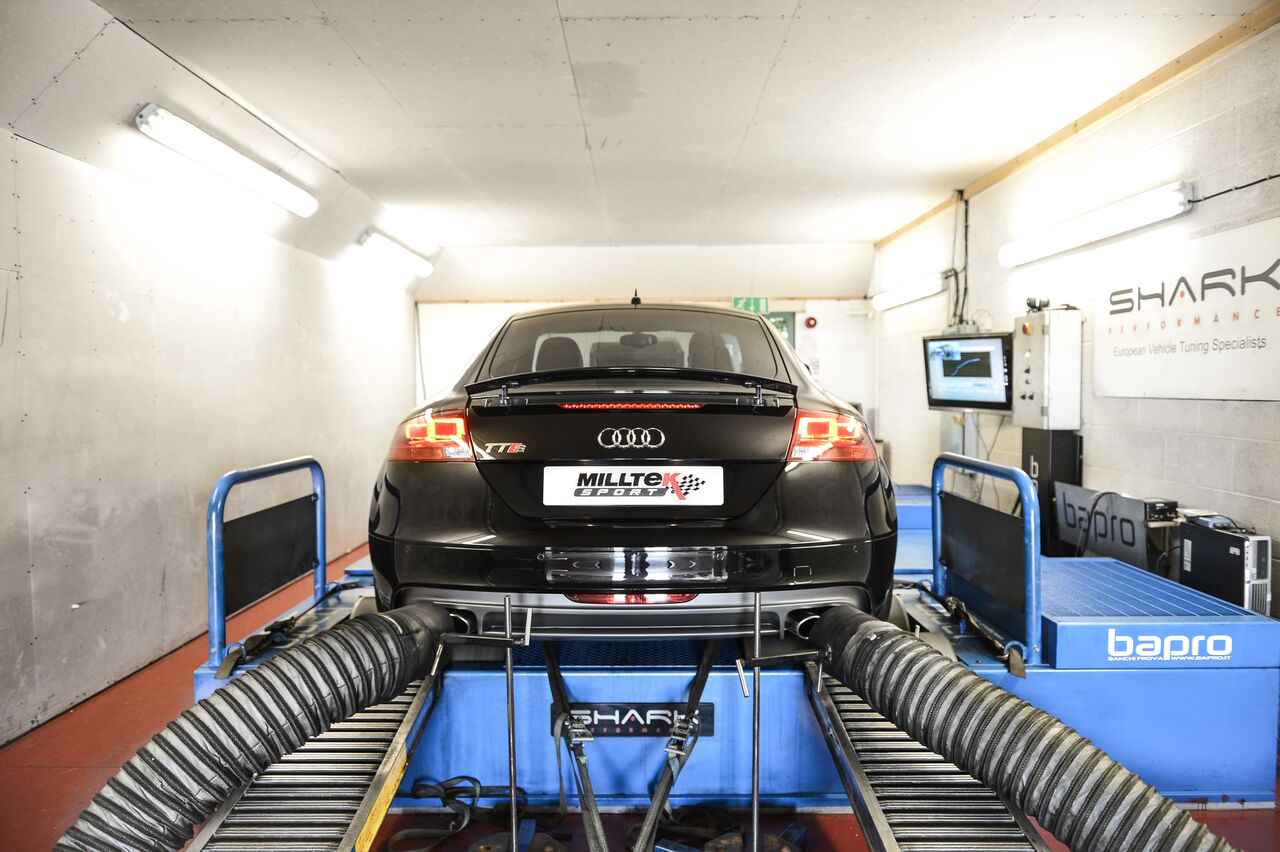 A great start then, but we are all keen to see how the new system would handle what most discerning owners would quickly throw at it after fitting – a full remap! Ben loaded up Shark’s bespoke software package, which would allow him to really optimise every single part of the fuelling, boost and ignition parameters in order to tease every extra horse safely out of the engine. What followed was a true masterclass in mapping over several hours, and watching Ben work, it was clear to see the advantages in a bespoke mapping session like this, rather than the ‘once size fits all’ solution favoured by so many internet tuners. 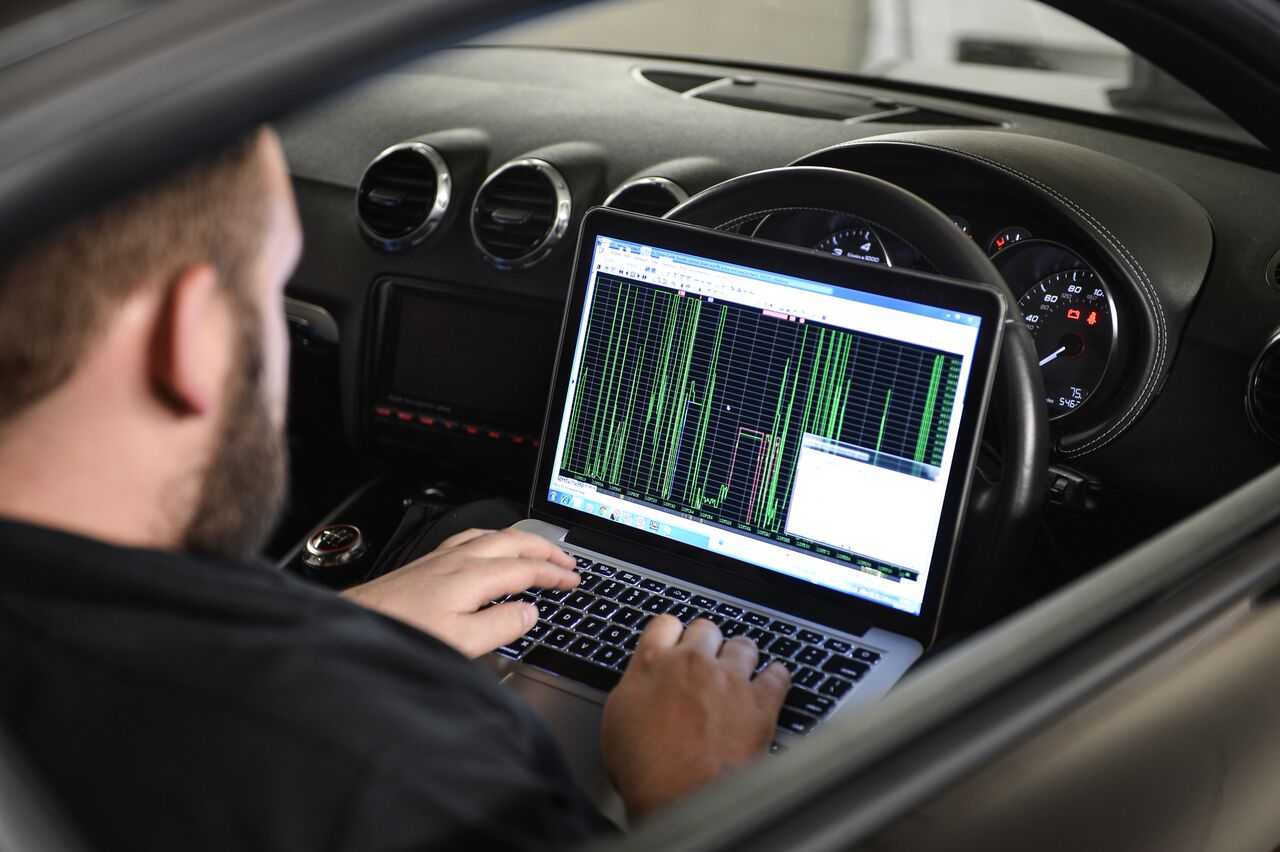 It was hugely interesting to note how and where he got the gains, and, counter-intuitively, how he was often able to reduce boost and fuel inputs, yet still increase power. Having closely watched this unfold, we can definitely endorse spending a little more of your heard-earned on having a bespoke map written for your car. Like the difference between an off-the-peg suit, and one created entirely for you, the phrase ‘quality is remembered long after price is forgotten,” seems hugely appropriate somehow, and, when the dust had settled, and the dyno shut down, the results were clear to see – 239.96bhp, over 50b more horses from the morning’s starting point! 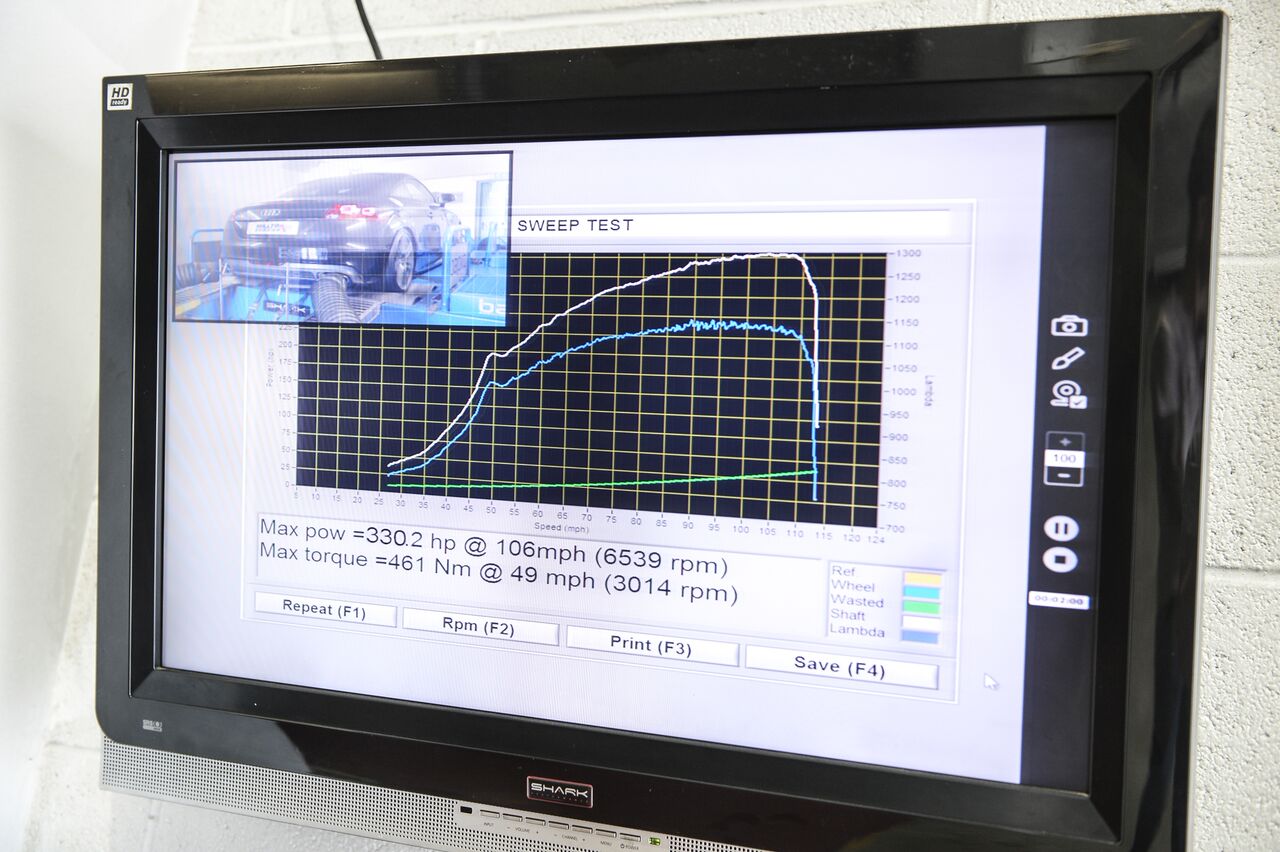 “I am seriously impressed with the way this system works with this engine,” Ben enthused. “Once I had got the map exactly where I wanted it, it was hugely evident that we were getting massive delta gains from both stock and TBE plots from the extra power available, but that’s not the only story here! The new freer flowing exhaust gasses meant we were able to safely wind in a higher RPM limit, which gives massive scope at the top end, and makes it seriously quick across all gears. 50bhp is a respectable number, but it’s how and where this car now delivers its power that is the most exciting thing, really… it’s totally different to drive – and so much more tractable no matter where you are in the rev range.” 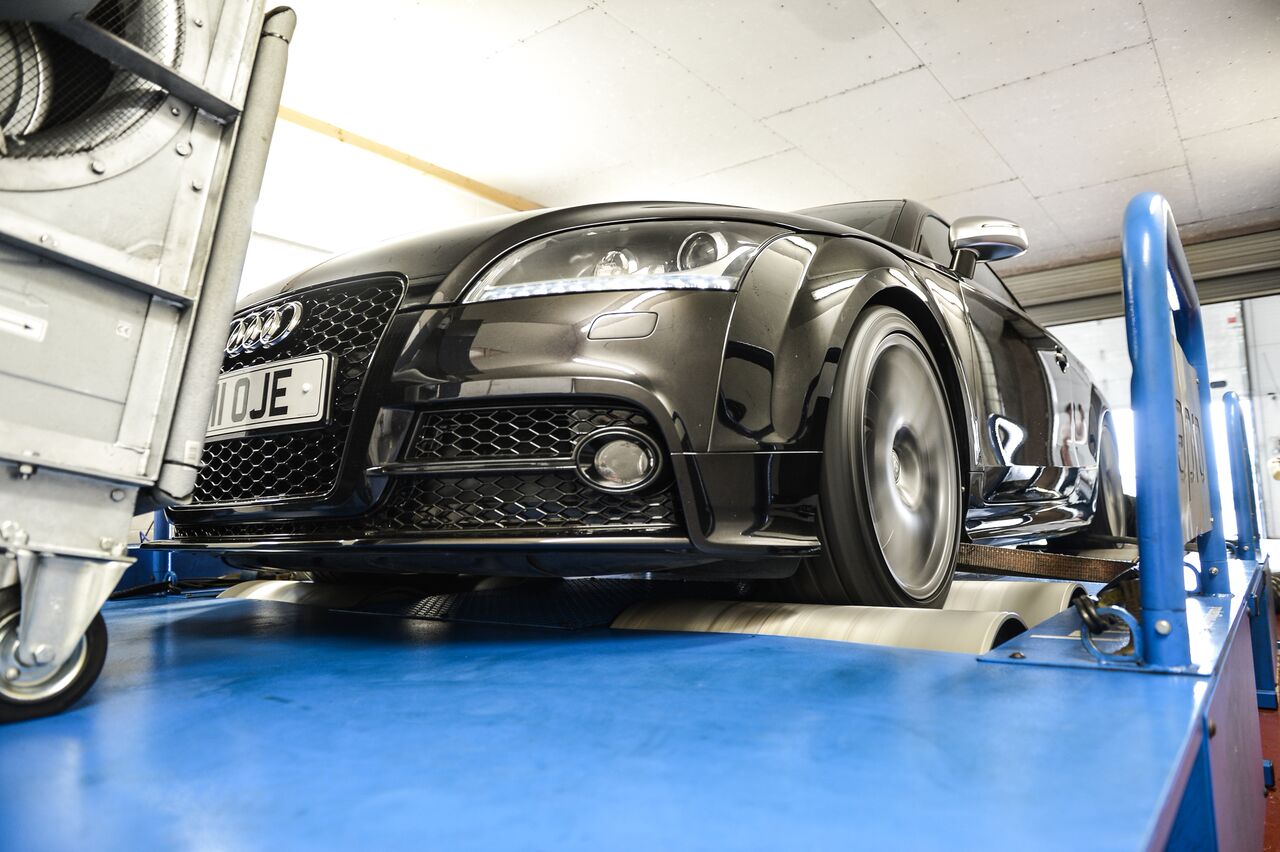 Compelling proof then that Milltek’s impressive new technology offers a proven gain in stock trim – and the capacity to really turn up the wick once fitted with quality software and tweaked by an experienced mapper. Milltek’s launch range caters for many cars including the Mk5 and Mk6 GTI, the A3 and S3, as well as almost all of the MQB chassised cars, with Shark similarly having a software solution for each one – as well as being able to fit the system in the first place! If you’re lucky enough to own one of these models, you know what your next mod needs to be! 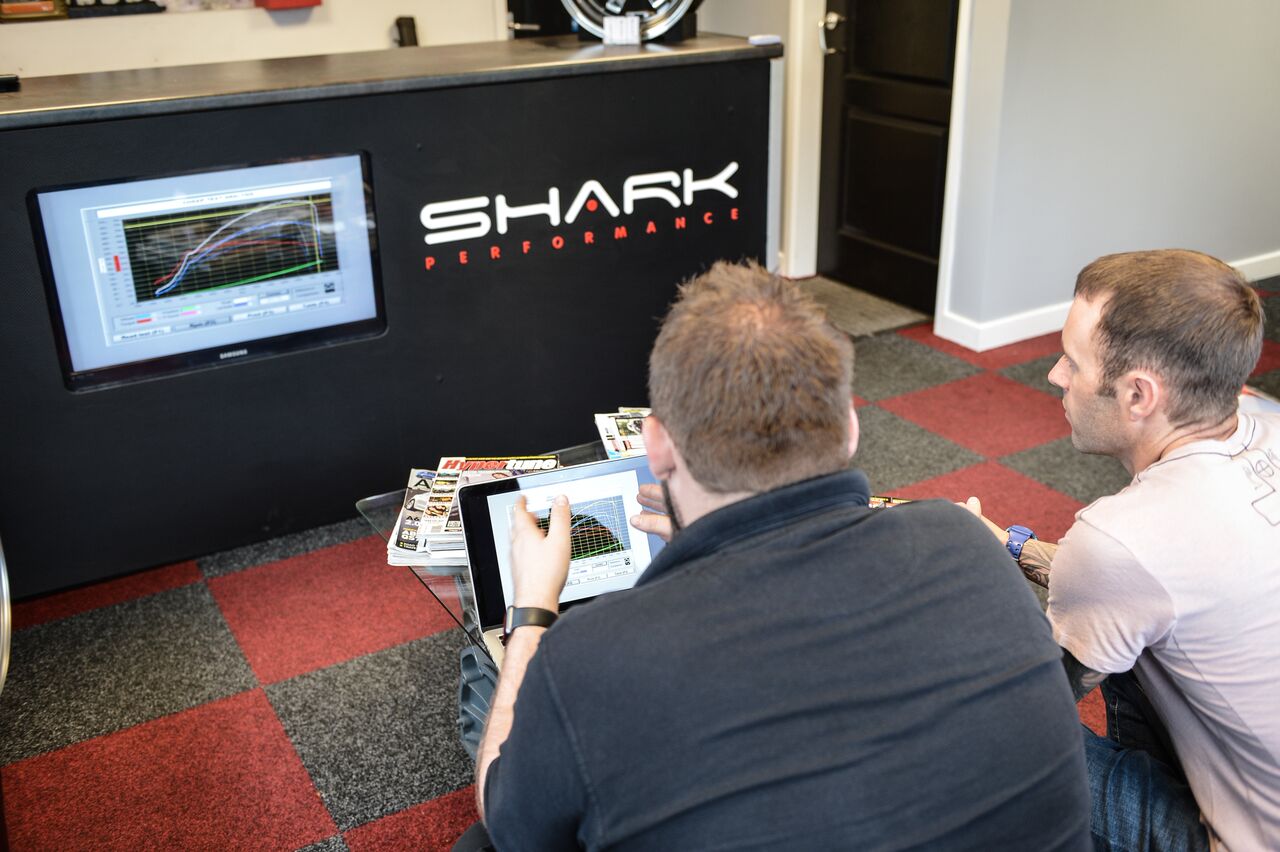