Tuning modern performance cars is an act fraught with danger and with the potential to end up with something much worse than when you started. Want a masterclass in how to go about it? Step right this way…

The Audi TT is a deceptively brilliant car with a flexible range of engines and transmissions that mean it really can be all things to all men. Think about it, there are very few sports cars that can claim to be every bit as suited to hammering around the Nurburgring as they are pottering around town, and the TT manages both of these with ease. This amazing spread of abilities became more apparent with the recent launch of the third generation TT, a car that managed to well and truly banish any cruel associations about it being ‘nothing more than a Golf in a frock,’ going on to sell in huge numbers – and it’s only been on forecourts for a handful of months! 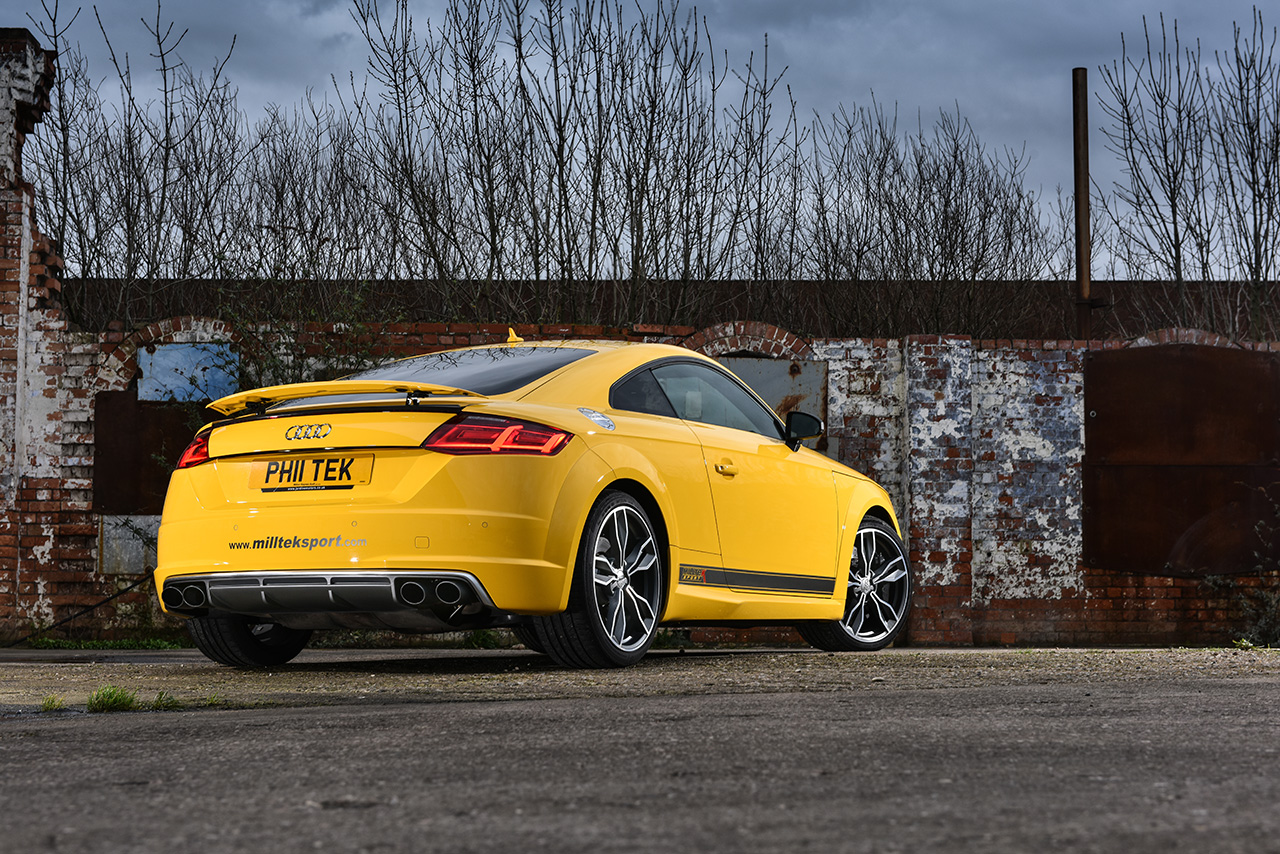 One firm with an intimate knowledge of Audi’s iconic sports car is Milltek, the builder of beautifully balanced and exceptionally sonorous exhaust systems. The TT has long been a part of their product portfolio and the team at Milltek have built up something of a reputation for churning out well modified Audis; the TTS you see here being the latest example.

“It’s hard to overstate just how good a car the latest TT is in standard guise; it’s balanced, tight and pretty much the ideal sports car. Making it even better without going too far and compromising one aspect was always going to be a challenge, hence why we spent so long perfecting every aspect,” muses Steve Pound, Milltek’s MD. 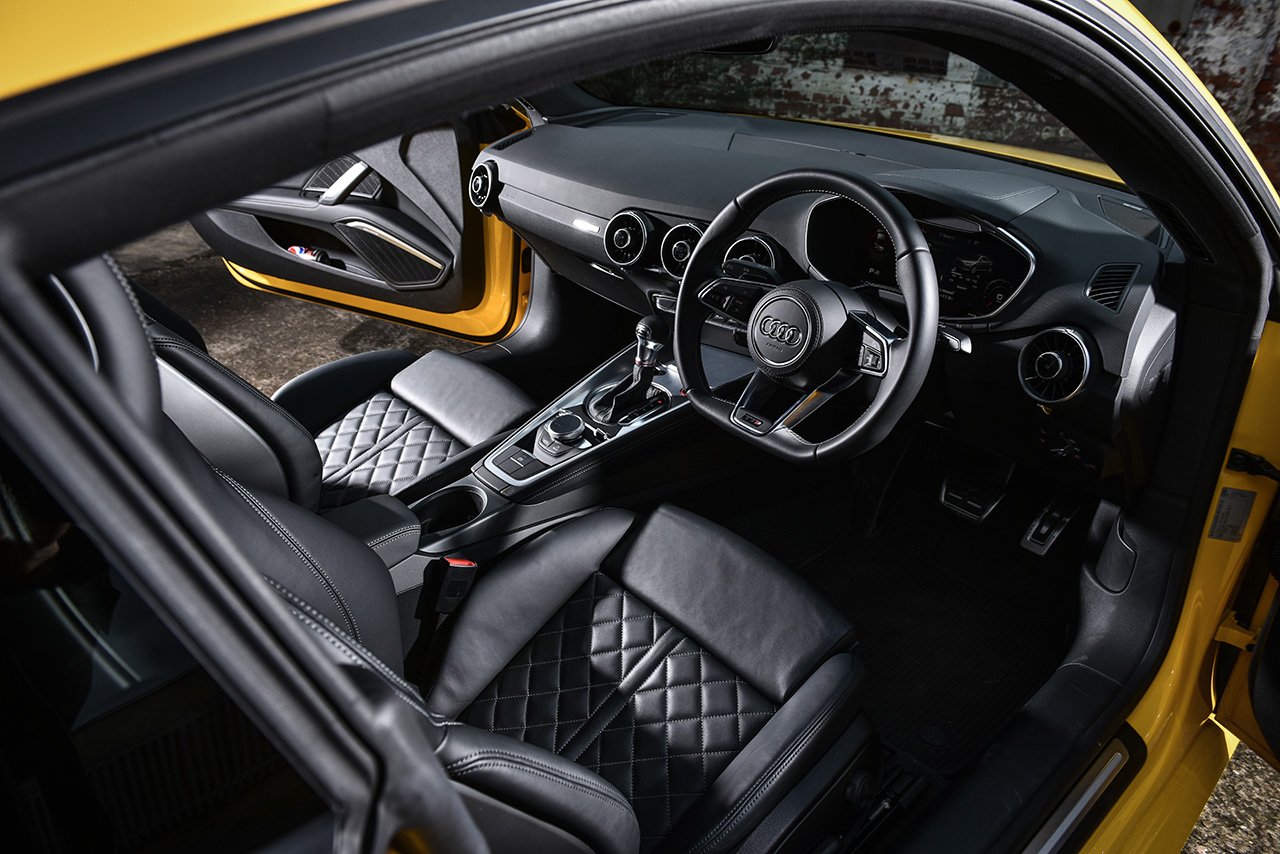 This reluctance to dive right in is more than understandable and explains why the spec of Milltek’s TTS doesn’t include a massive aftermarket turbo, air suspension or wheels big enough to make a West coast rapper blush. It’s devoid of these things because fitting them would almost certainly push it in one set direction, compromising its overall capabilities and rendering it a less capable car in the process.

Don’t for a minute go thinking that this car is all show and no go though, because that’s far from the case. Key to this TT’s renewed performance is the Milltek system that now snakes its way out from the engine bay and under the car, before splitting into two and ending with an attractive twin tailpipe design. Even this could have been taken to extremes far too easily. Milltek could’ve opted for a massive diameter pipe with no baffles and boxes, an exhaust that would’ve been the automotive equivalent of tying sticks of dynamite to a bull’s horns, showing it a red rag, then chucking it into the proverbial china shop, before locking the door. 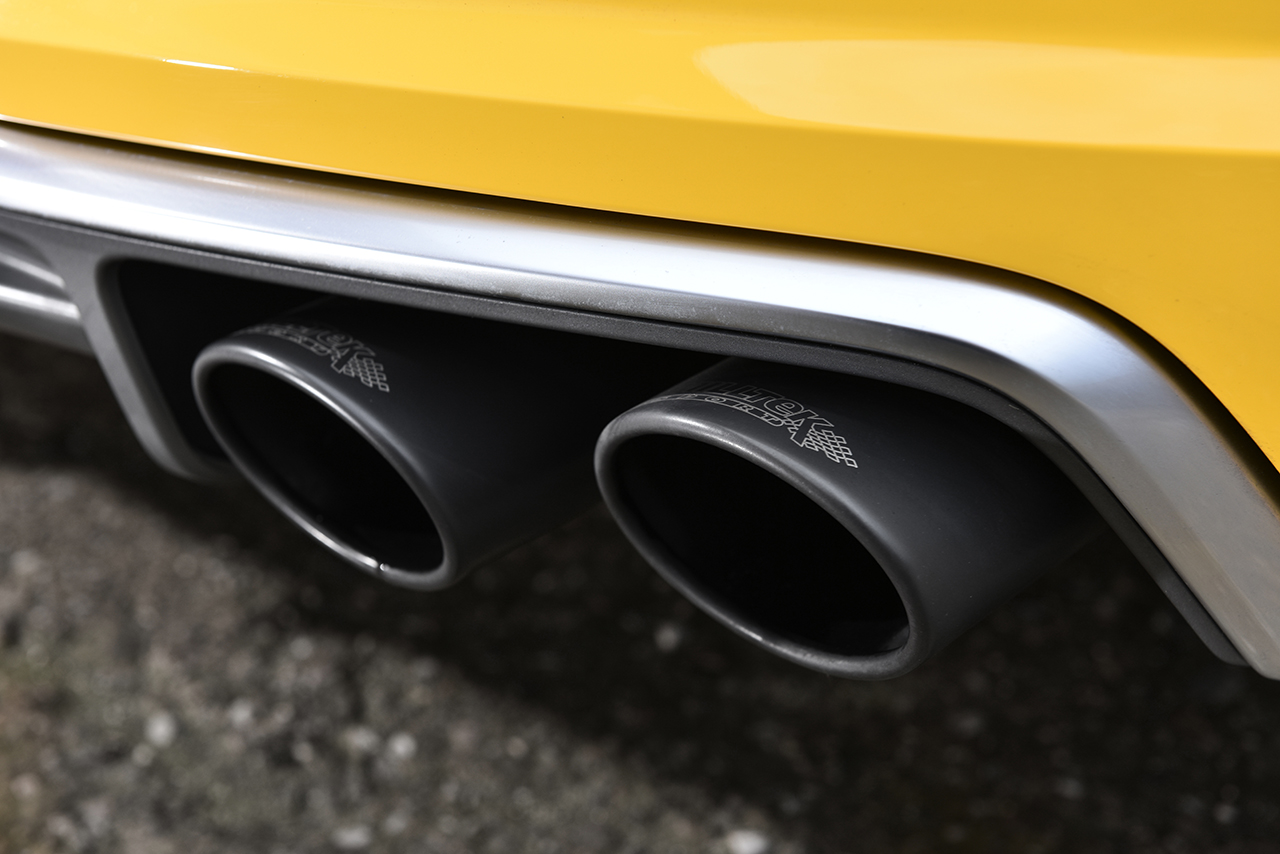 “Making an exhaust that bellows and makes a huge noise ,no matter how much throttle is being applied is all too easy,” explains Steve with a chuckle. “Making one that actually suits the character of the car that it’s attached to, well, that’s a bit more involved!”

The system consists of a 3 inch downpipe, high-flow sports cat, a Milltek Sport cat-back system, plus the previously mentioned twin tailpipes. The system manages to tread the fine line between sporty and fabulously vocal, with the resulting noise being aggressive without ever becoming intrusive. Put simply, you’ll have no problem using Milltek’s TTS on a daily basis, and quiet Sunday trips to the supermarket won’t suddenly give way to a noise not heard since the late ’90s, when the likes of the Subaru Impreza and Sapphire Cosworth were kings of the UK scene. 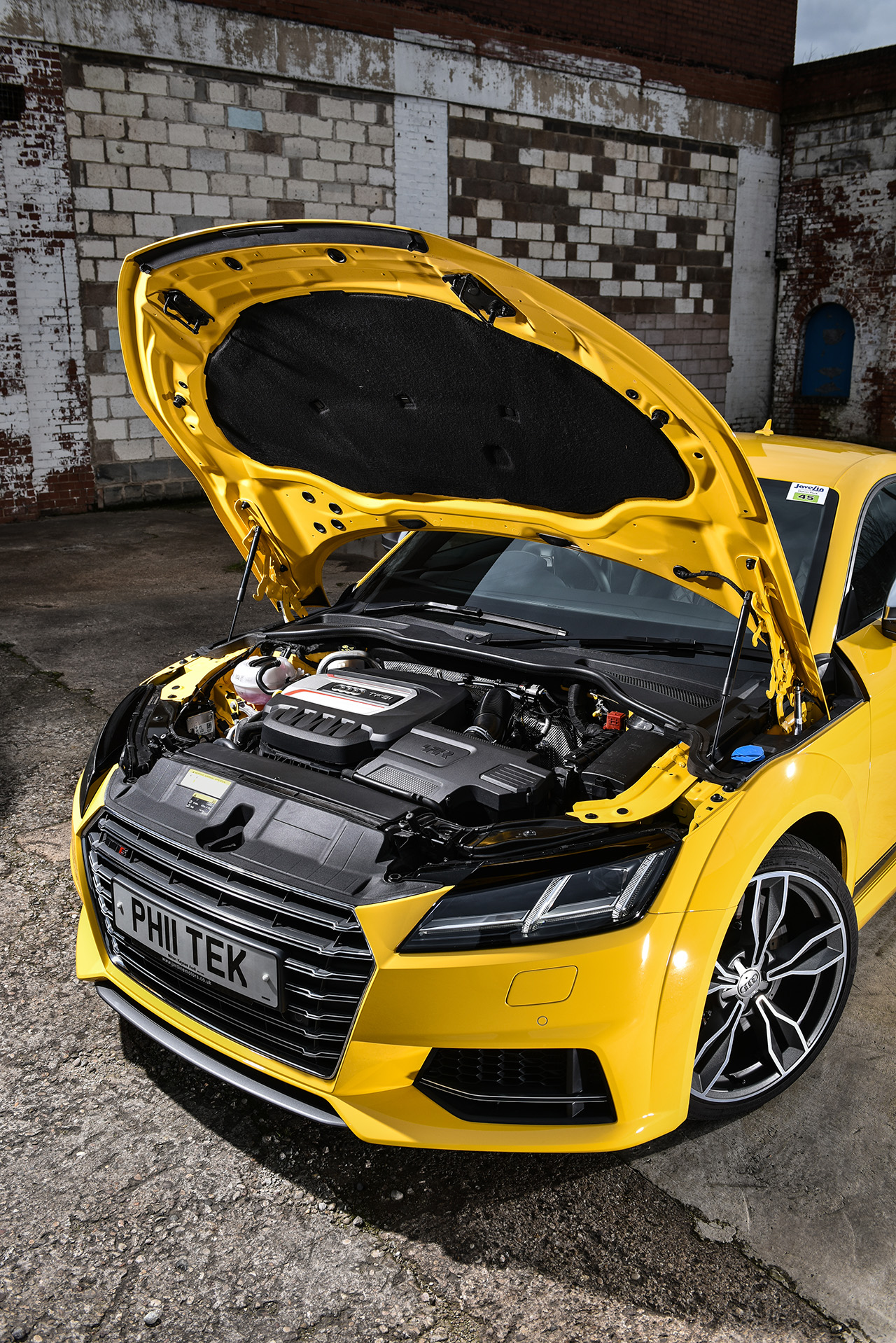 The system also provides proven exhaling benefits for the deep-breathing inline four that dominates the space between the Milltek TT’s wings. What Milltek don’t know about performance enhancing systems really isn’t worth knowing, and the one strapped to the TT embodies a good portion of their hard-won knowhow. The high-flow sports cat is particularly impressive as it allows the TT to stay on the right side of UK emissions regulations without strangling performance or sound.

That same four pot also features a VWRacing R600 intake and a Stage 2 APR remap. Both fall squarely into the ‘quality over quantity’ bracket, and both offer up demonstrable performance benefits thanks to their clever design and the careful nature in which they’ve been applied. The Volkswagen Racing cold air intake is especially trick, and features a double sized filter housed in a giant air box, the latter fed via a pair of carefully developed inlet tracts. The material inside the box itself is equally sophisticated thanks to a triple layer of TriFoam, a substance that’s commonly found inside the airboxes of F1 teams. Not only does the ‘domed’ design of this material provide increased surface area and contamination capturing properties, it provides even more airflow with lower restriction. The result is a high volume and unbroken supply of cold air funneled directly from the atmosphere (i.e from outside the TT’s engine bay) to the engine itself, and as all good engineers know, cooler air in the cylinder equates to more power and more bang for your buck. 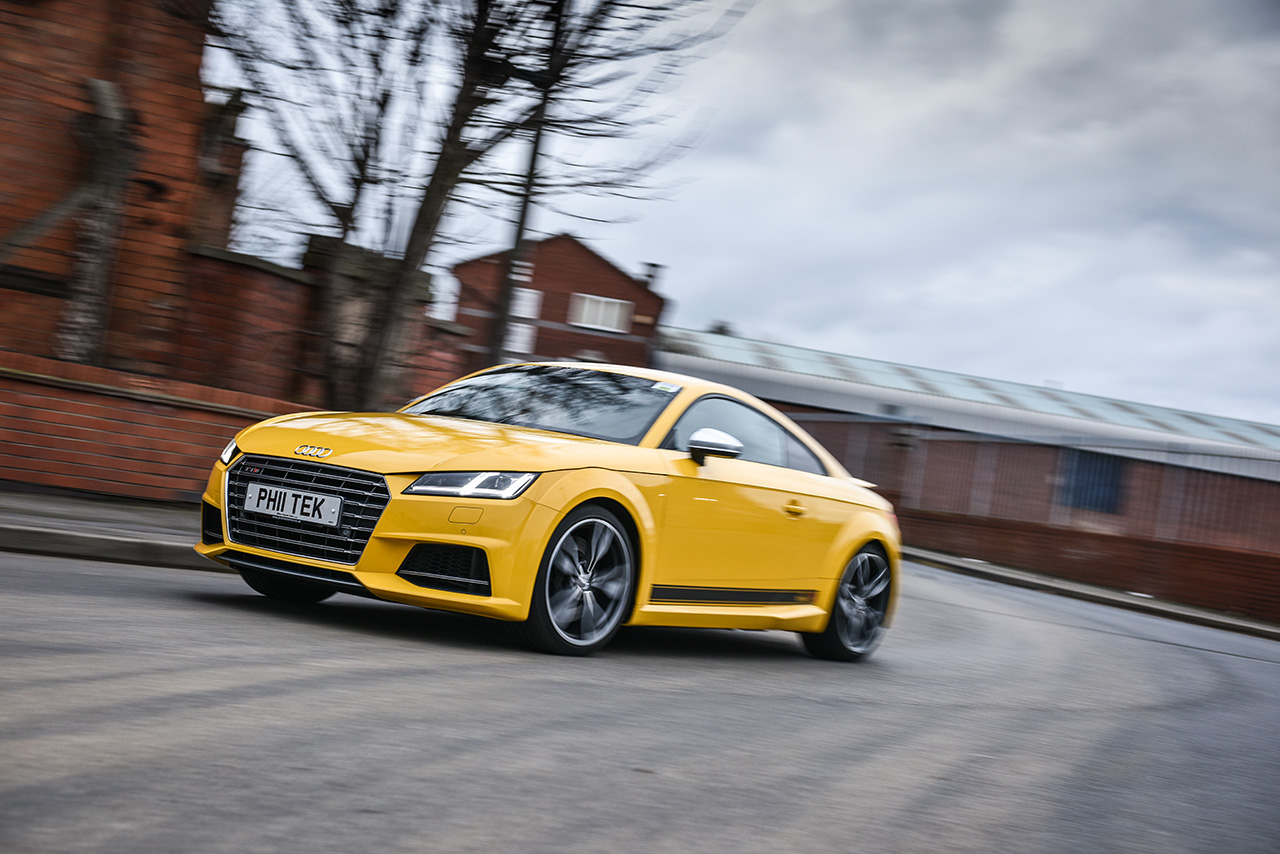 “It’s easy to get stuck in the trap of thinking that all induction kits do the same job and therefore are the same, but that’s just not the case,” explains Steve. “We were careful to match the induction tract to the car and its eventual purpose and rough power output. The R600 is good for 600bhp, so we’re more than covered for the foreseeable future!”

Those three innocuous sounding changes have left the Milltek TTS able to call on a thumping 382 bhp of power and 387 FT-LBS of torque, but there’s far more at play here than mere grunt. Kneel down to inspect the front brake setup and you’ll be greeted by the welcome sight of eight-piston Brembo calipers and imposing 362mm drilled and grooved discs, with Project Mu high friction brake pads sandwiched in between. Not only does this give the TT the stopping power to match its newly hiked power output, it does so without making hauling it to a stop in any way daunting or ‘snatchy.’ Partly that’s down to the brakes themselves, but the fact that the whole car enjoys an expert aligned certainly doesn’t hurt either. 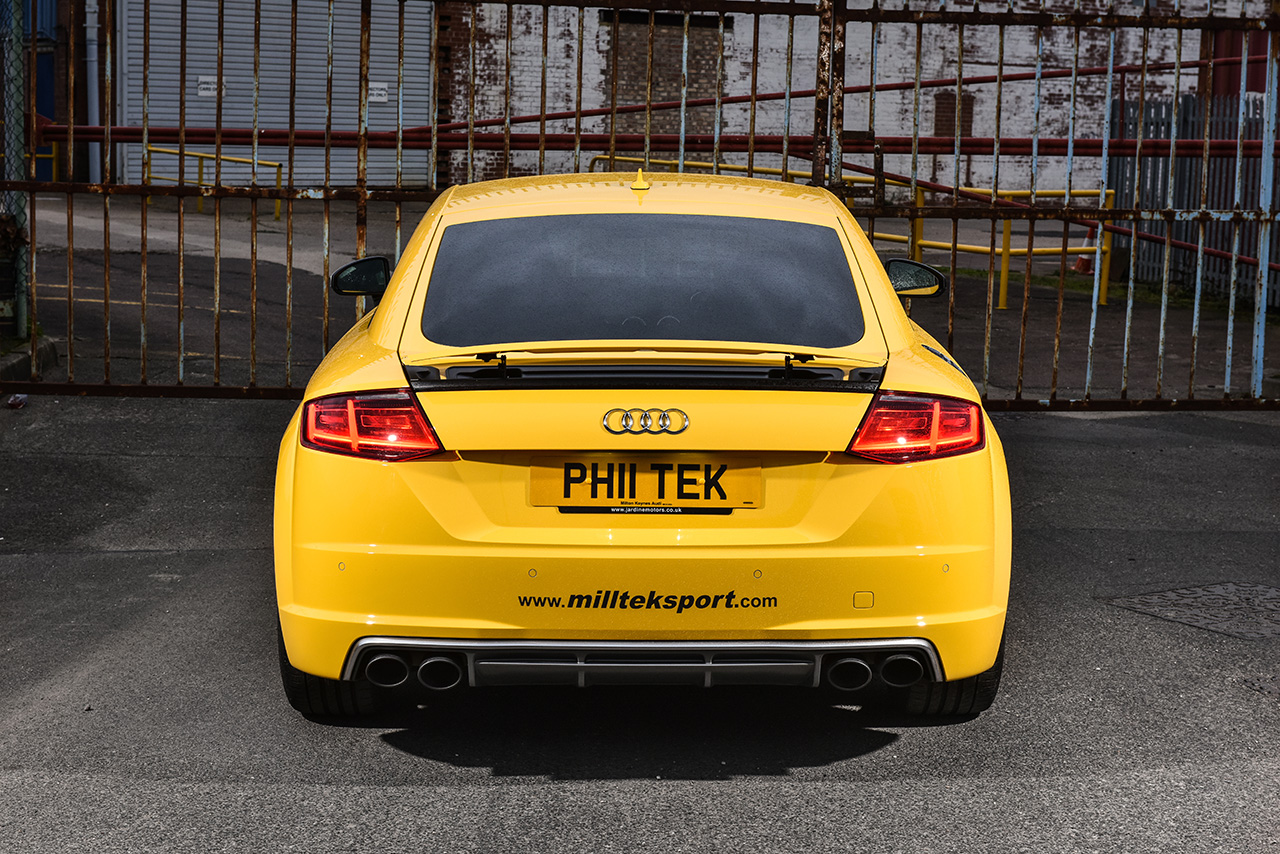 We’ve said it before and doubtless we’ll say it again, but building a car like this TT, one that subtly balances performance with everyday, real world usability, takes a staggering amount of thought, planning and considered execution. As we’ve already said, humungous aftermarket turbo setups and other bolt-ons associated with massive power projects are notable by their absence and for once this is a good thing. Driving this car now is an utter joy, a brilliant way to get ‘back to basics’ and to re-connect with what makes hustling a well modified car such an involving experience. The addition of the Milltek system, Stage 2 remap and VWRacing inlet lends the TTS a hit of extra aggression without ever becoming intimidating or intrusive, while the extra power that these modifications have gifted the car with is available across the rev range.

A few short minutes behind the wheel are all that’s needed to confirm that Steve, the Milltek team and the guys at APR and VWRacing have more than delivered. Perhaps the ultimate proof of the transformation that’s been wrought is just how balanced everything is, and in this respect it doesn’t feel like a tuned car, certainly not in the traditional sense. Power comes in smoothly and all 382bhp can be used at any given time, the exhaust note is sporting at idle and raucous when you want it to be – i.e. when you’re pushing on – and there’s a pleasing induction ‘roar’ to be had when you plant the throttle. It handles well, (the comprehensive corner weighting and balancing evidently having worked a treat), and those beefy Brembos make short work of any excess speed carried into the corners. In short, it’s the ultimate all round, fast road car, one that’s utterly complete in every respect. Impressive? Sure. Fun? Absolutely!