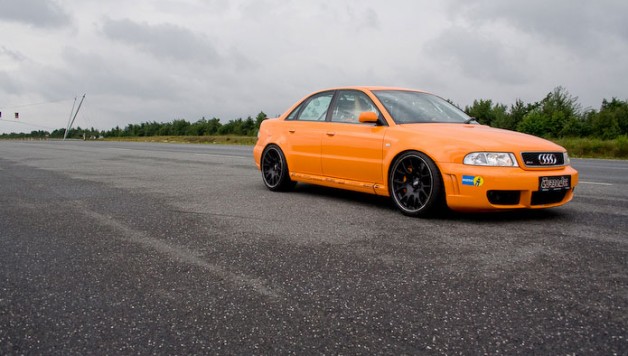 The German tuning specialist TurboArt has modified the Audi S4 to produce more than 700 horsepower with its B5 Audi RS4.

The B5 Audi RS4 now only weighs a little more than 3,330 pounds. Modifications include a Bilstein B16 PSS9 suspension, Dunlop SportMaxx GT rubber and blacked-out BBS CH BE wheels. Although the tuner doesn’t divulge the specific engine specs, you can assume TurboArt has been true to its name and added a more powerful turbocharger system to the Audi sport sedan.

Inside, the vehicle was mostly stripped and features new Recaro bucket seats and a full roll cage.

TurboArt recorded its version of the S4 sprinting to 186 mph in a mere 26.94 seconds at the Papenburg racetrack in rainy conditions.