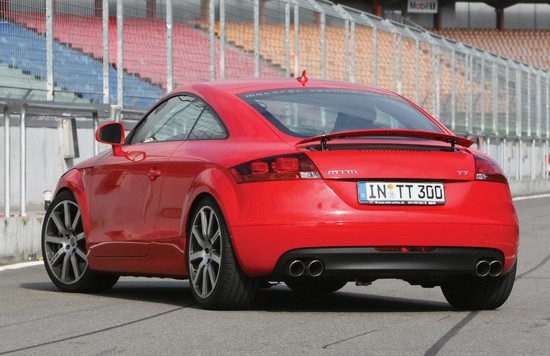 Like its predecessor, the new Audi TT is one of the more positive appearances on the coupe market. MTM from Wettstetten, Germany, has already had its hands on this Audi and has refined the new star in the Audi range both on the outside and under the hood.

MTM expertise from the race circuit

Power boosts for the TT with 3.2 V6 engine will shortly be available. In an initial stage, MTM increases the engine output to 280 bhp by means of modified camshafts and changes to the air filter and muffler system. 340 bhp are available in the second stage, which the V6 engine generates with the aid of an MTM supercharger. This puts the MTM TT hot on the heels of the 911!

To create a sound befitting of the additional power, MTM offers – both for the 2.0 TFSI and for the 3.2 V6 – a stainless steel exhaust system with a 70 mm pipe guide. This can be combined either with a 4-pipe rear muffler (4x89mm) or a 2-pipe rear silencer (2x89mm) from MTM. Both rear mufflers can be used with the standard rear apron. For the 2.0 TFSI, which normally only has recesses on the left for the tailpipes, tuning specialist MTM offers a rear apron lower section featuring an additional recess on the right. The lower section is also used for the 3.2 V6. MTM also offers the 4-pipe rear muffler with exhaust gas flap control, which helps to generate an even sportier sound.

Sporty wheel rims are a must. The TT acquires a considerably more individual look when kitted out with MTM in-house-developed “Bimoto” rims. This wheel rim is strictly no frills and, thanks to its linear design, constitutes the perfect match for the TT with its sleek appearance. Two attractive finishes in the form of “Shiny Silver” and “Polished Titanium” are available for this elegantly sporty rim. The “Bimoto” is currently available in both finishes in the format 8.5 x 19 ET 50 with size 255/35-19 tires. MTM will shortly be offering the rim also in the format 9.5 x 19 ET 45 with 255/30-19 tires, likewise in both finishes.

As regards the brakes, MTM provides customers with a number of concepts to choose from. Enhanced deceleration is ensured even by the entry-level version in the dimension 330×32. For drivers who run their TTs on 18″ wheels, the 365×34 system constitutes a larger variant in the range. Those drivers who occasionally put their TTs through their paces should opt for the 380×34 system. As regards the brake discs, MTM pays particular attention to achieving an optimum weight saving compared with the competition. This is possible, for instance, by means of larger cooling ducts.

An extensive aerodynamics kit is currently in the pipeline and will shortly be available for the TT. According to MTM’s general rule, special requests are also catered to. As such, customized conversions are also undertaken!

Further information on the extensive technical range from MTM for vehicles of the Audi-Volkswagen Group is available online at www.MTM-ONLINE.de or by calling
+49 (0)841/98188-88.