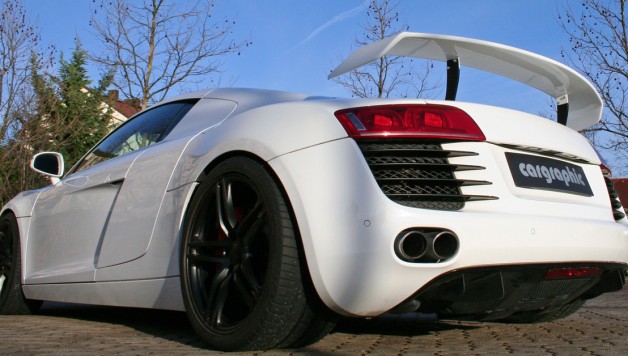 The Cargraphic Airlift Suspension for the Audi R8

The Audi R8 sets benchmarks and has the situation under control all the time. Its supremacy is, however, deceptive as even a high curb or a steep garage drive can limit the R8’s territory. With the Airlift Suspension from vehicle tuner Cargraphic, however, the R8 driver can literally leap over the boundaries which have existed to date, without ruining the expensive front spoiler in the process.

For “existing damage” Cargraphic also offers attractive replacements and complete R8 aerodynamic packages in a carbon design as part of its collection.

The pneumatic height compensation system Airlift Suspension, which has been developed in-house, elevates the vehicle at the front spoiler by up to 72 mm. In order to protect the suspension, the process lasts just 15 seconds. “This also results in a cool show effect”, says Cargraphic General Manager Michael Schnarr, “particularly in connection with the radio remote control.” But show alone is not the remit of the “Performance company”. As a result the Airlift behaves completely neutrally with regards to its driving dynamic qualities. Walter Roehrl proved this on the Hockenheimring in 2009 with a correspondingly equipped Cargraphic Porsche 997 Turbo (video stream at www.cargraphic.de). But how is this possible, as after all “air” is not supposed to be part of the good basis of a high-end driving dynamics solution.

The surprisingly fast to mount Cargraphic Airlift is not an air suspension system, but merely consists of air bellows and a separate compressor. The former sit on the upper spring cup of an ideally tested BILSTEIN B16 CSC coil over suspension system and are only used to compensate the height. In inactive condition the bellows form a rigid frictional connection, so that the coil over suspension system alone is used – above 50 km/h the system lowers automatically. The small boot remains untouched by the conversion and the vehicle weight is increased by a mere 3 kilos including the compressor. Effective and efficient, just the way customers of Cargraphic like it. Unlike similar hydraulics solutions, there is also no danger of the insides of the car being ruined by an oil leak. After all, the reputation of the Audi R8 can’t receive a black mark on its white vest. Another considerable advantage is: the Airlift is delivered complete with a TÜV/technical component report and does not limit the choice of wheel/tyre combination. Thereby the customer can draw on the attractive R8 alloy program of Cargraphic without limitation, in which the company from Landau offers plenty of designs in 19 and 20 inch, one-piece or three-piece designs. Sonorous stainless steel exhaust systems which are produced in-house by Cargraphic – with or without a valve control system – are also available to round off the design melodiously.