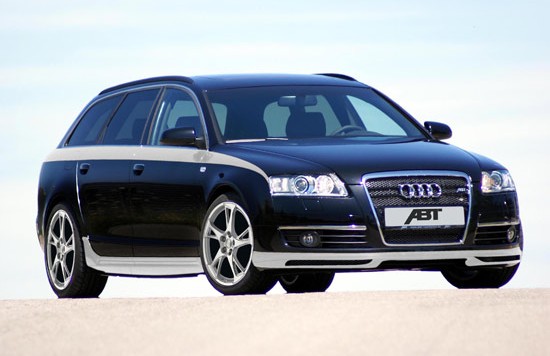 The newest brilliant invention forthcoming from the Bavarian art of engineering is the 3.0 TDI Diesel with a work performance of 100 hp per liter. A real steam hammer from the engine fitness center of Abt Sportsline. The performance data of the Abt AS6 3.0 TDI are impressing, more than ever in comparison with the serial engine.

The power increase amounts to around 20 percent; instead of 233 hp (171 kW), now 300 Diesel horses are available. And they push the car forward with overwhelming power. The maximum torque, getting free at 4000 rpm, is breathtaking 600 Nm.

At the same torque, the already powerful serial self-igniting engine gives 450 Nm to the crankshaft. 33 percent torque increase is enough reason that the Abt AS6 3.0 TDI becomes more sporty. The 300 Diesel horses do not only offer a sporty feeling, also the acceleration data correspond to sporty top-class cars. Within 6.9 seconds the AS6 is catapulted to 100 and to a top speed of 249 km/h (serial 242 km/h).

This enormous additional performance potential of the Abt V6 TDI is made possible by the new programming of the engine management and by the assembly of the Abt supercharger which is especially adjusted to the engine. As usual for the leading tuner of cars from the Volkswagen group, also this Diesel steam hammer is stable and absolutely suitable for everyday use.

In order that the powerful AS6 3.0 TDI always remains controllable, the team from Abt installed the Abt brake system and this proves to always cope with the additional requirement. And so does the adjustable suspension, perfectly adjusted by the DTM Pro Christian Abt, which optimally brings the power onto the road.

Diesel and driving pleasure are finally joining their forces in the A6. Of course, the designers from Kempten also developed a tailor-made suit for the premium sportscar. Abt side skirts create a dynamical line from the elegant but outstanding front with the unobtrusive front spoiler lip to the brawny rear. The broad fenders with the outwards aligned rims are extra emphasized by the Abt rear skirt. Anyway, most road users will only see the Abt AS6 from behind and there an impressive view is offered. With the rear spoiler and the four chromed Abt end-pipes also the car’s back view appears optically powerful.

Appearance and performance are a good match. As a matter of course, Abt Sportsline also offers suitable wheels and wheel-tyre sets for the AS6 and recommends, e.g., the sports wheel AR20 in the size 9.0 x 20 inch.