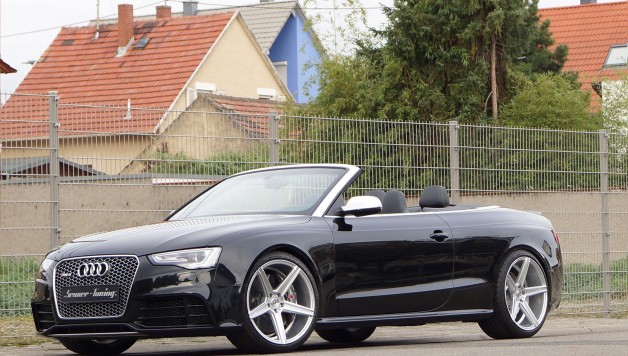 At long last: We have finally left the cold season behind us and just in time for the “start of the season” at the beginning of March, the first open Convertibles could already be seen plying our streets under the bright
sunshine and temperatures ways beyond the 20-degrees limit. The Audi RS5 Convertible belongs to the high-end segment of the open-sports racing cars. 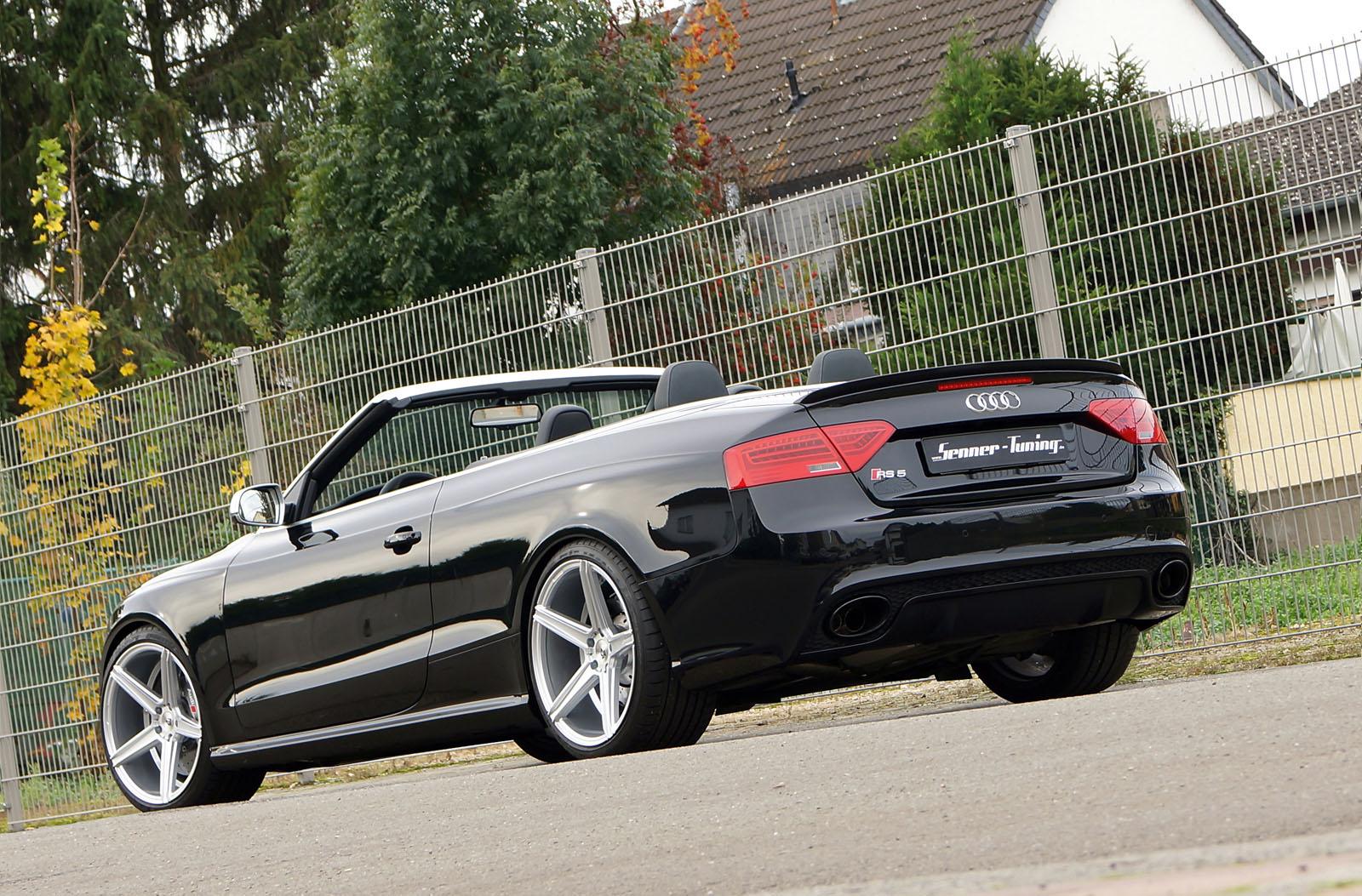 The company Senner Tuning from Ingelheim has set itself the task of discreetly refining a copy of the racy, four-seat folding roof. With the single-part MB DESIGN KV 1 in deep concave, the rim design of the coming season has found its way into the wheel houses of the phantom black fresh air bolide! The team around Benno Senner combined all-round, the single-part measuring 10.5×20 inches with the Dunlop Sport Maxx GT high-performance tire of the dimension 275/30R20. A KW coilover kit of variation 3 that can be adjusted between rebound and compression damping endows the Convertible which weighs almost 2 tons, with a palpably dynamic cornering behavior without seriously impeding driving comfort. A discreet spoiler tear-off edge made of semi-gloss carbon clearly crowns the baggage compartment lid. The exterior design is complemented by an LED number-plate illumination. 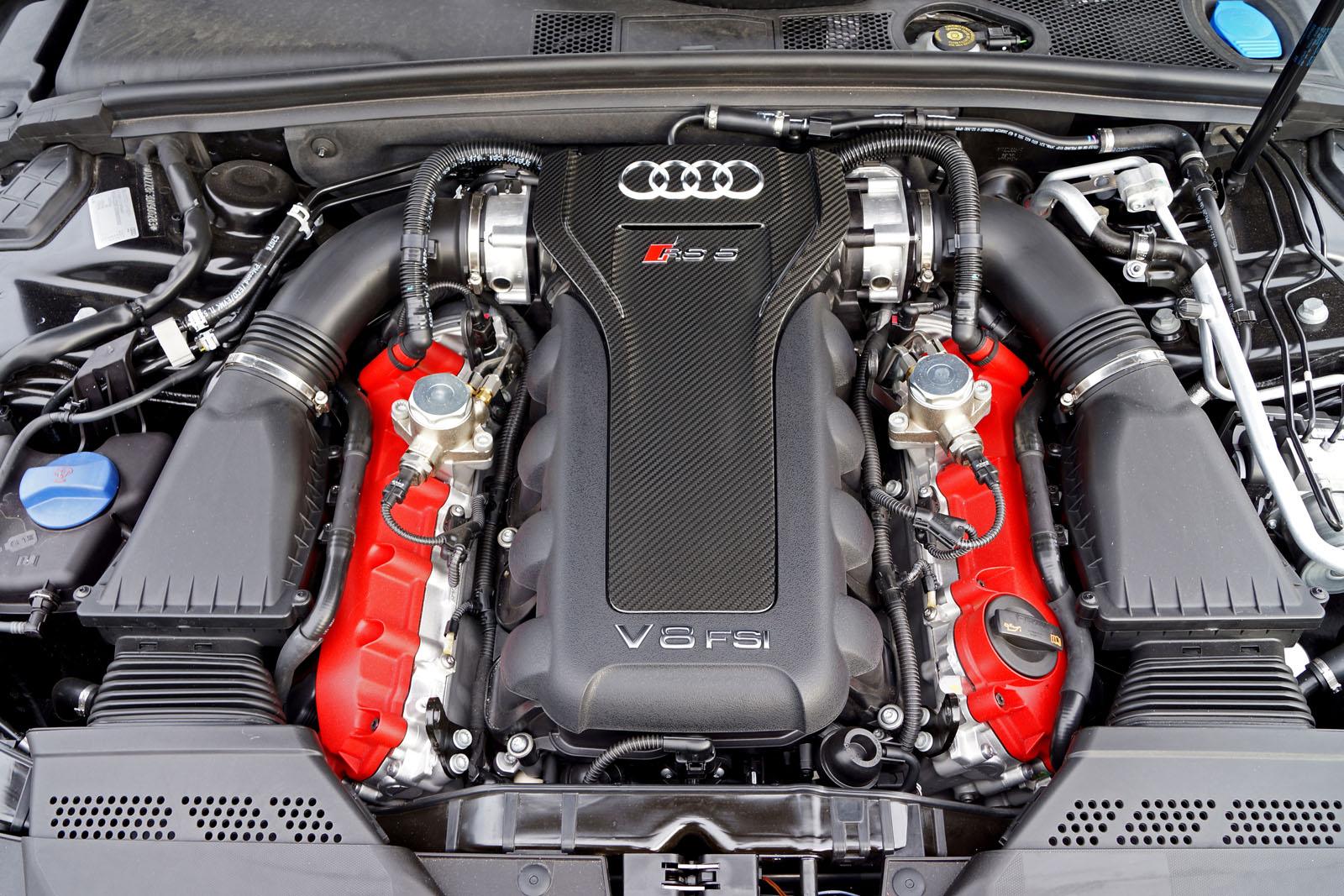 Even though the 4.2 liter V8 under the engine hood of the RS5 is a naturally aspirated high-rev engine – and immense performance boost is of course, not easy to achieve under such circumstances, as with a charged power unit – Senner succeeded in boosting the power of the eight-pointer from the standard 450 to the present 504 horse power using software optimization and the installation of additional components. Parallel to this, the maximum torque of the engine that was ornamented with a decorative carbon cover grew from 430 to the present 478 Newton meter. 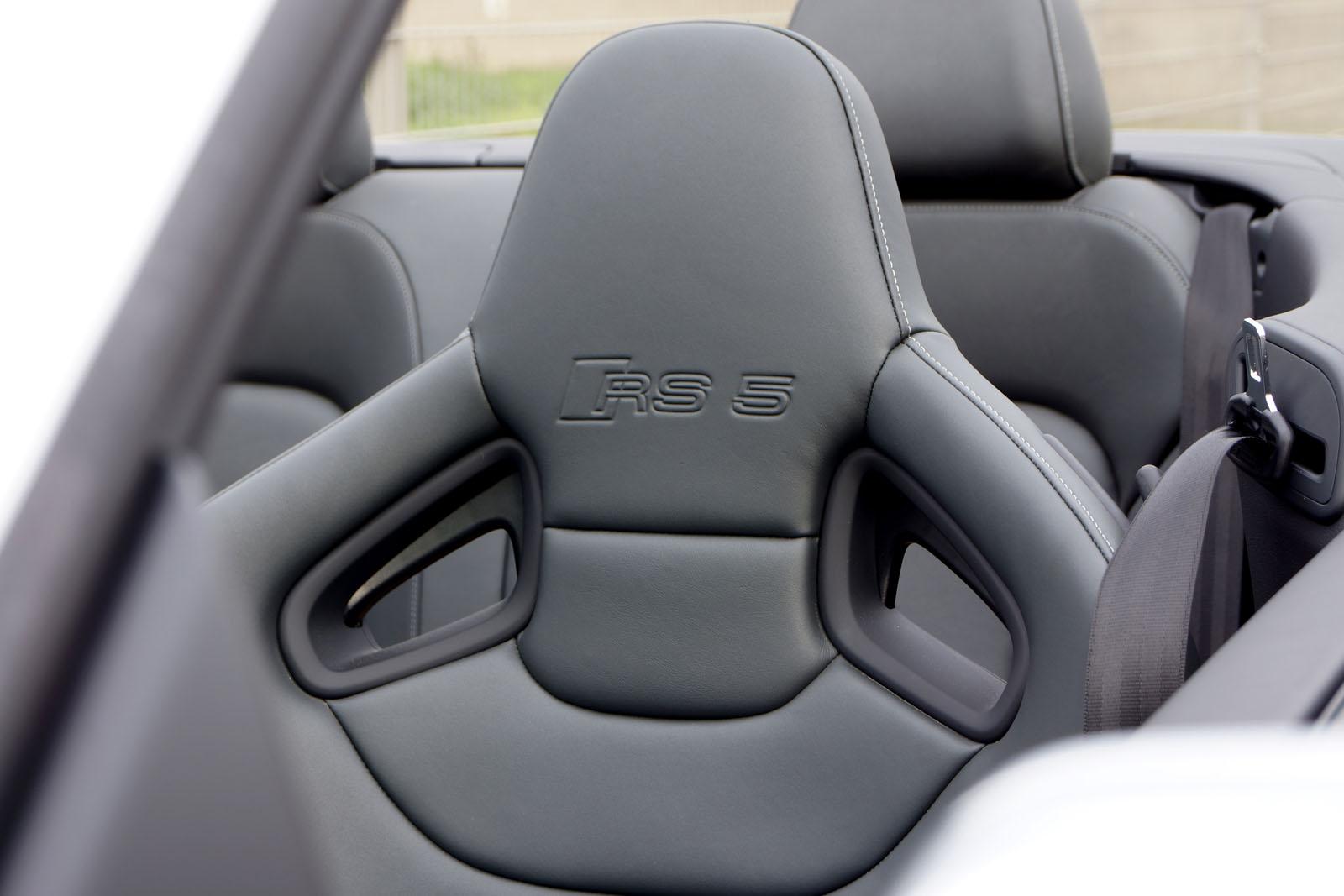 Moreover, a power converter sharpens the characteristic line of the gas pedal and thus generates a more spontaneous response behavior. Undoubtedly, the valve-type sports exhaust system with a regulatory system that is adapted to the back pressure including front muffler, whose three sound modes “travel, sports and race” cannot only be switched at random but can also be visualized even in the MMI display plays a major role in the performance boost. 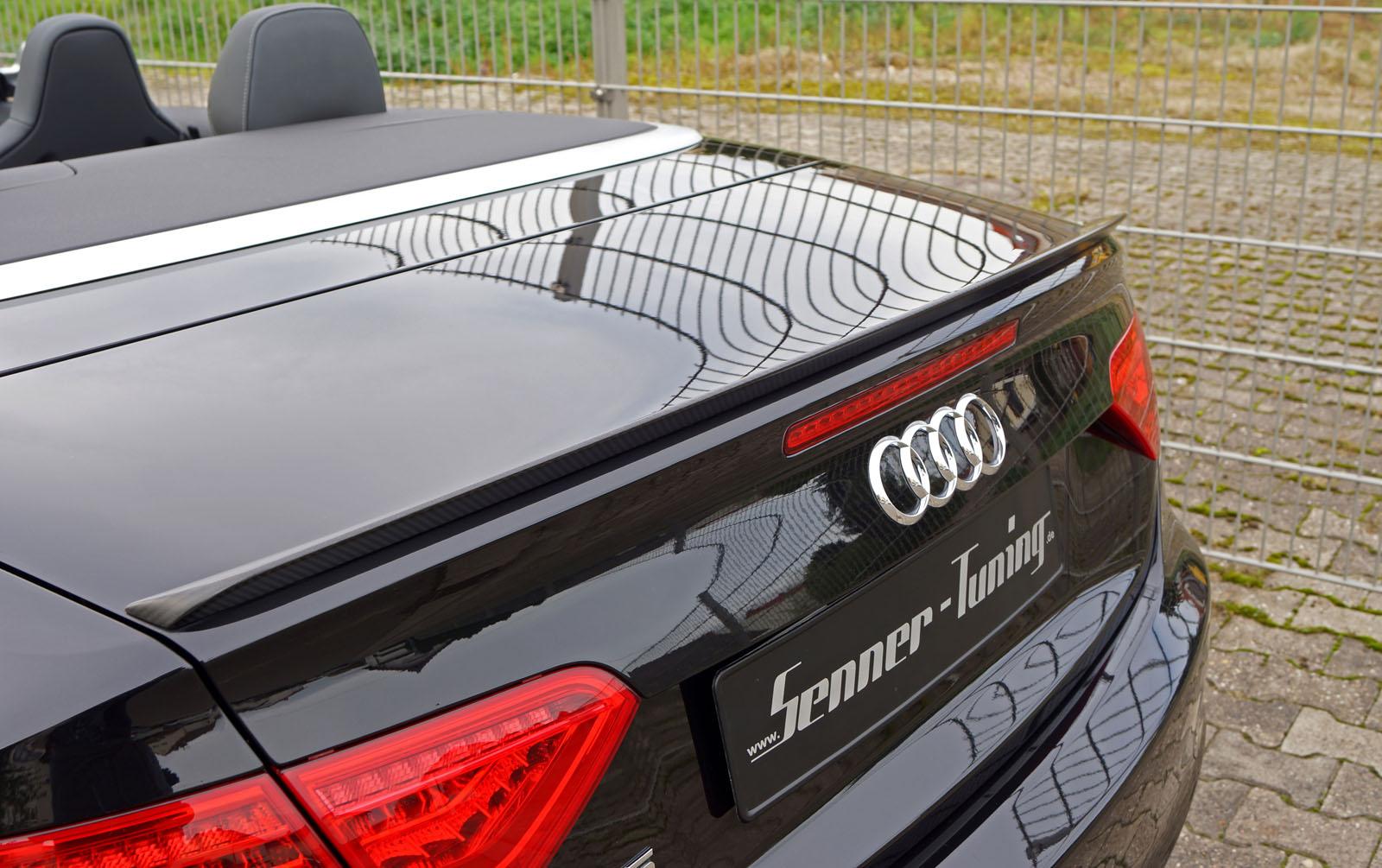 Of course, the power treatment is also reflected in the driving performance: If the RS5 previously required 4.9 seconds in the standard production status, to accelerate from 0 to 100 k.p.h., it now covers the standard sprint
in just 4.2 seconds. Moreover, the Convertible breaks through the 300 k.p.h. speedometer limit whenever desired thanks to the elimination of the Vmax limitation. It is therefore a positive actuality that the ceramic brake system waiting behind the front wheels also generates the relevant deceleration that is commensurate to the forward thrust whenever required. 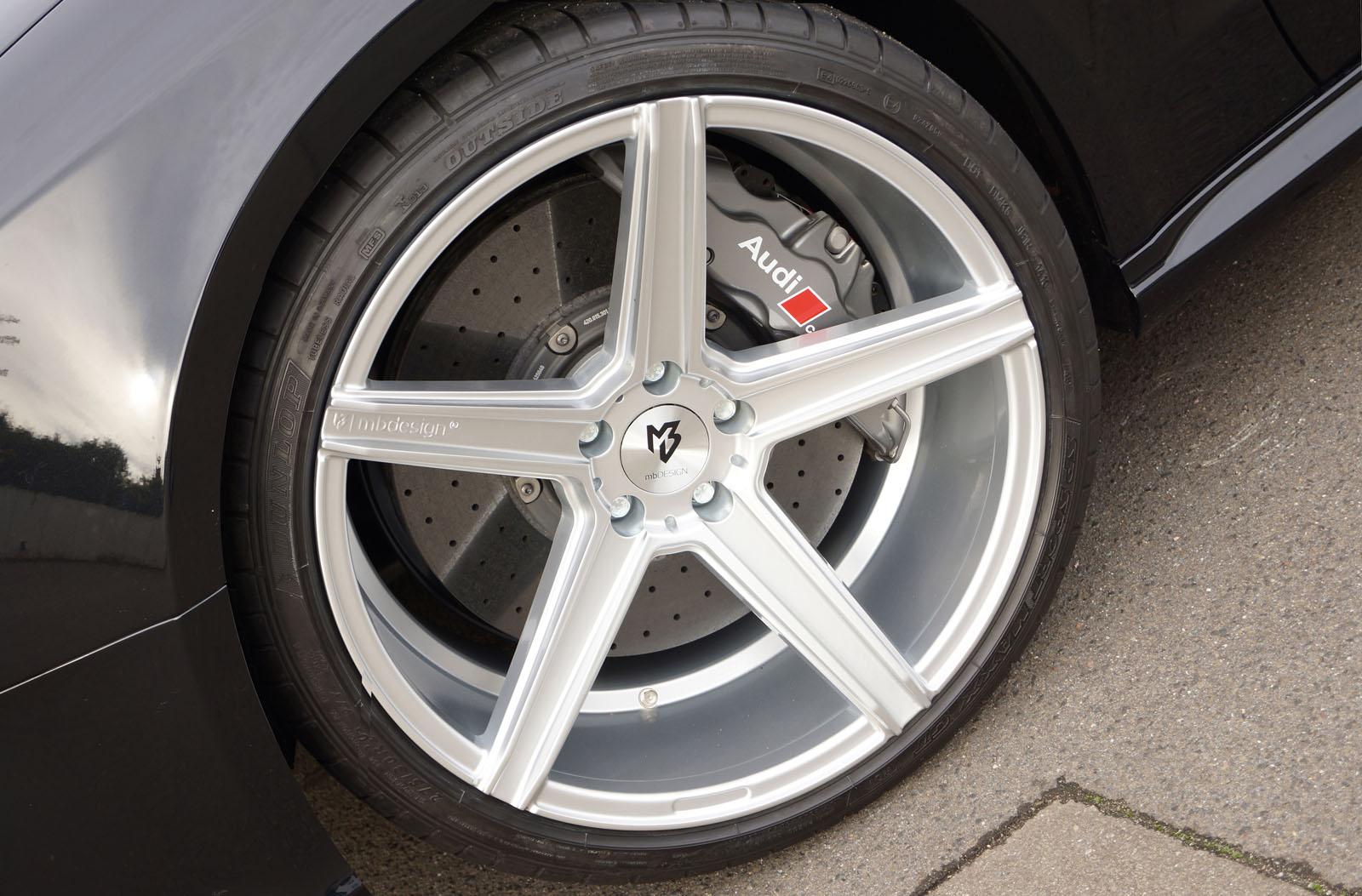 The DVD activation enables the pleasure of blockbusters also while driving. And of course, since such a Convertible unfolds its full attraction only after it has been opened, Senner Tuning also installed a convertible soft top control module of the latest generation to facilitate a comfortable open-air delight. This does not only enable the opening and closing of the “Textile hood” at the push of a button through the original remote control but also while driving at up to 60 k.p.h.. Operating processes are also acknowledged optically and/or acoustically whenever required.