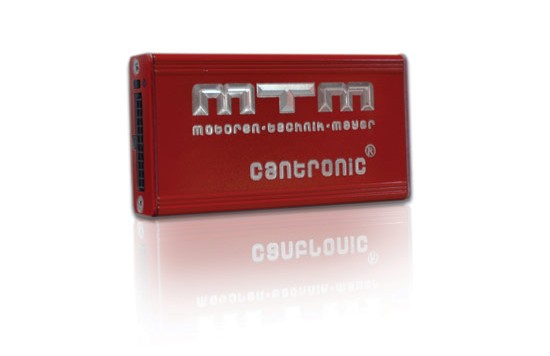 The newest development from Motoren Technik Mayer GmbH once again places more emphasis on results versus mere appearances. The engine specialist from Wettstetten, Germany offers its newly developed MTM Cantronic, as an alternative to the new programming of the original engine control unit, enticing better performance and torque out of Volkswagen’s current diesel engines. With a further alternative, the F-Cantronic, MTM lays a hand on the electronically controlled suspension height. Both variations are immediately available.

Further possible applications of the MTM Cantronic such as a removal of the V-max limitation are currently being developed.

The M-Cantronic is an electronic device altering the engine maps of the ECU three-dimensionally. MTM exploits the full potential of previously unused power reserves. Instead of generally raising the fuel pressure by a certain percentage and thereby possibly damaging the engine, MTM takes a softer approach. The Cantronic takes engine speed into consideration in performance optimization. It taps the RPM values from the CAN-bus (Controller Area Network), and, dependent on this, varies fuel and boost pressure. With this complex modification, the M-Cantronic offers all the advantages a conventional chip-tuning has, yet providing further amenities.

In comparison to a re-programmed original engine control unit, the M-Cantronic can be built in by customers themselves or from a garage and just as simple and in an uncomplicated manner, removed again. Following a new re-programming by MTM and an eventually necessary replacement of cable harness, the M-Cantronic may be further utilized in other vehicles. It therefore offers a better suited solution for customers that often exchange their vehicles providing convenient replacement and simple self-assembly. Given the current ecological debate, MTM pays special attention to the particle filter. In spite of a noticeable increased performance, the M-Cantronic has no negative consequences for its function and effectiveness. Even if a garage installs a software update for the engine control unit, the Cantronic remains unaffected.

A5 3.0 V6 TDI: One of the first applications for the M-Cantronic is the Audi A5 3.0 V6 TDI. Customers can pleasantly enjoy an overall performance from 215 kW (292 hp) between 4.000 to 4.500 rpm and a maximum torque from 580 Nm between 2.500 and 3.200 rpm. A further expansion includes a 4-pipe exhaust system. Through flow optimization, the exhaust back pressure in the system and thus temperature is lowered. In this manner, MTM achieves a further increase in power to 300 hp and an increase in torque to 585 Nm.

In the Volkswagen Group, there are several vehicles equipped with electronic air suspension. Again here the MTM Cantronic hooks up into CAN-Bus data stream. The electronic lowering in the form of the F-Cantronic will soon be available for the current models Audi A6, Allroad, A8 and Q7, Bentley Continental GT, Continental GTC and Flying Spur, VW models Touareg and Phaeton as well as the Porsche Cayenne.

All Cantronic variations can be ordered for immediately. The complete delivery of a Cantronic consists of the Cantronic module itself, a vehicle-specific cable harness, instructions, TÜV-approval and original MTM logo in chrome. Both Cantronic variations are available from MTM importers as well as MTM´s online shop.

Further information about the extensive automotive technology program of MTM for vehicles of the Audi – Volkswagen Group can be found on the internet at www.mtm–online.de or by telephone 049-841-98188-88.