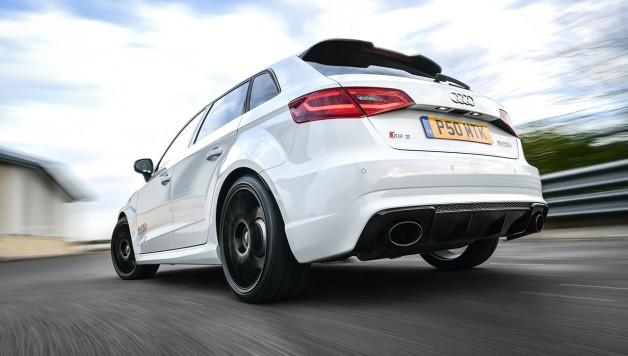 Few car manufacturers can claim to have enjoyed quite such a successful a start to the new century as Audi. Yes, the rallying exploits of the Quattro meant that by the ’90s the Ingolstadt concern was a household name, but it wasn’t quite on a par with its long-term rivals from Munich and Stuttgart. Its cars weren’t imbued with the degree of poise and performance that we now expect, and the brand itself certainly wasn’t perceived as being anywhere near as cool as it now is. So what happened? Well at some point after the millennium had ticked over, someone at Audi decided that they’d had rather enough of playing second fiddle to the likes of BMW and Mercedes and decided to do something about it, starting with the A3. It may have been based on fairly everyday VAG Golf mechanicals but the potential was plain to see. Add some special branding, a lot more power and Audi’s legendary Quattro drivetrain and what were they left with? The mighty RS3, that’s what. 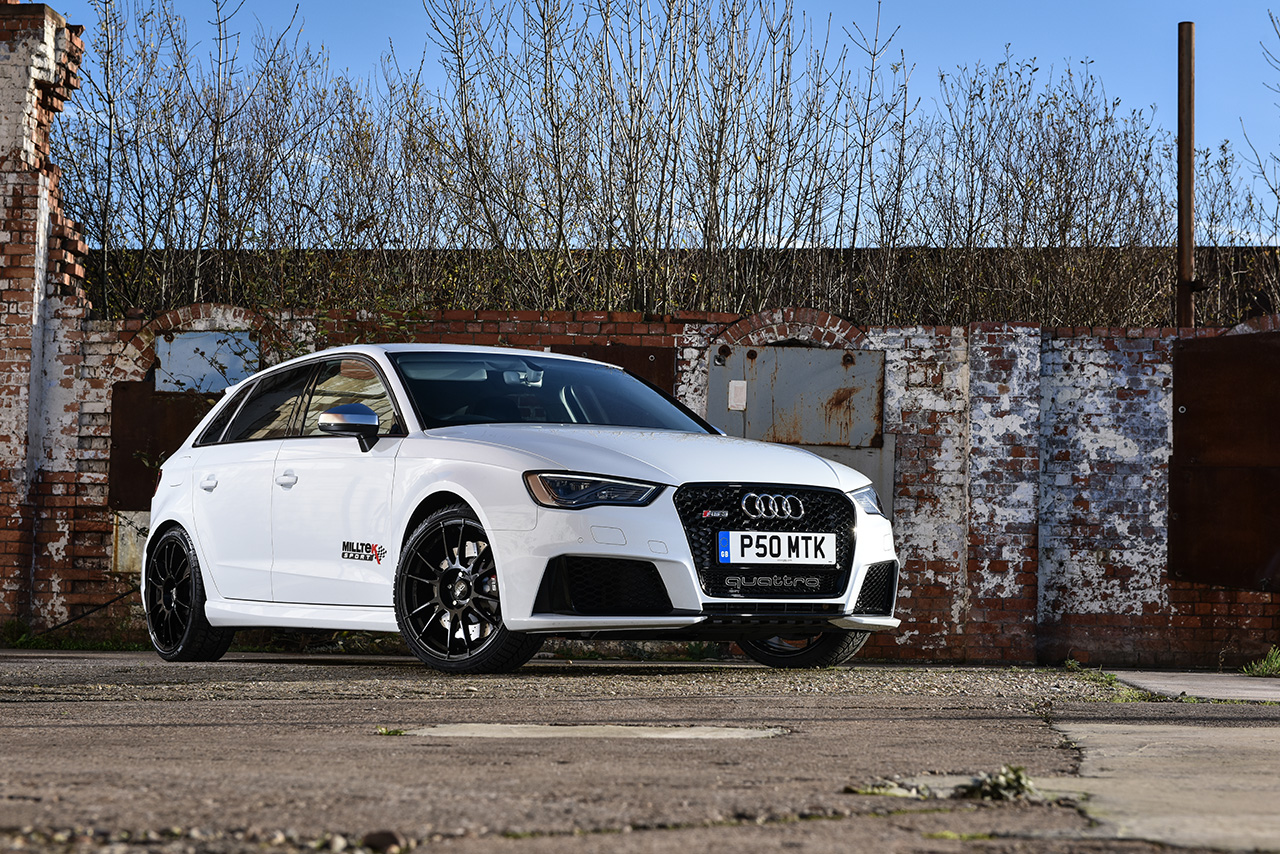 Over the last decade and a half the RS3 really has come of age, to the point where it’s one of the most capable hot hatches on the market. Indeed, referring to this car merely as a ‘hot hatch’ is to do it something of a disservice; with 326bhp on tap, a dizzying array of technological wizardry to call on and the aforementioned 4×4 system, the latest RS3 is really more of a ‘ballistic hatch.’ The only issue with the car now is how to make it better without compromising the core values already present, values that Audi worked so hard to build in in the first place. 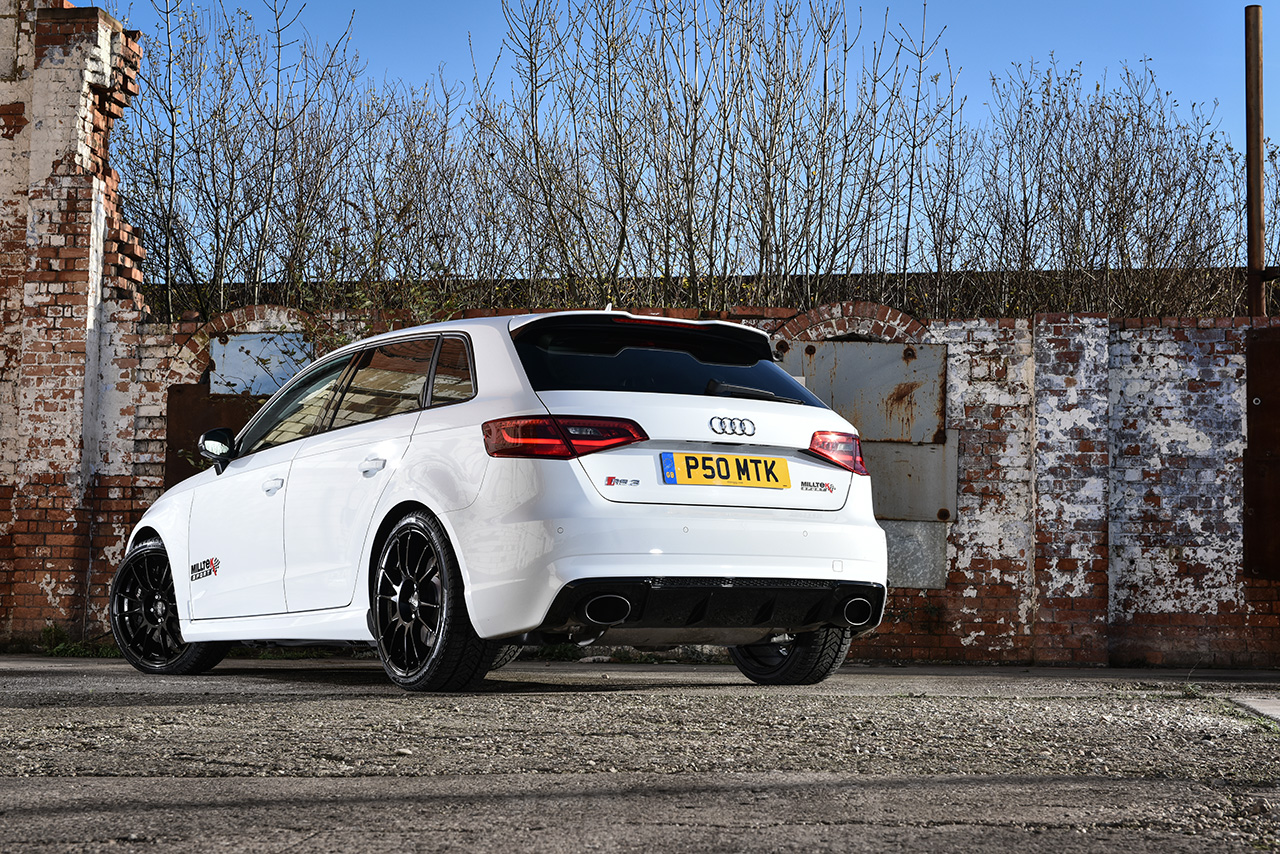 Step forward Milltek, extraction gurus and the owners of the RS3 Sportback you see before you. The last few months have seen this Glacier White example go from looking innocuous to downright malevolent, a transformation that’s made total when it burbles purposefully into life! 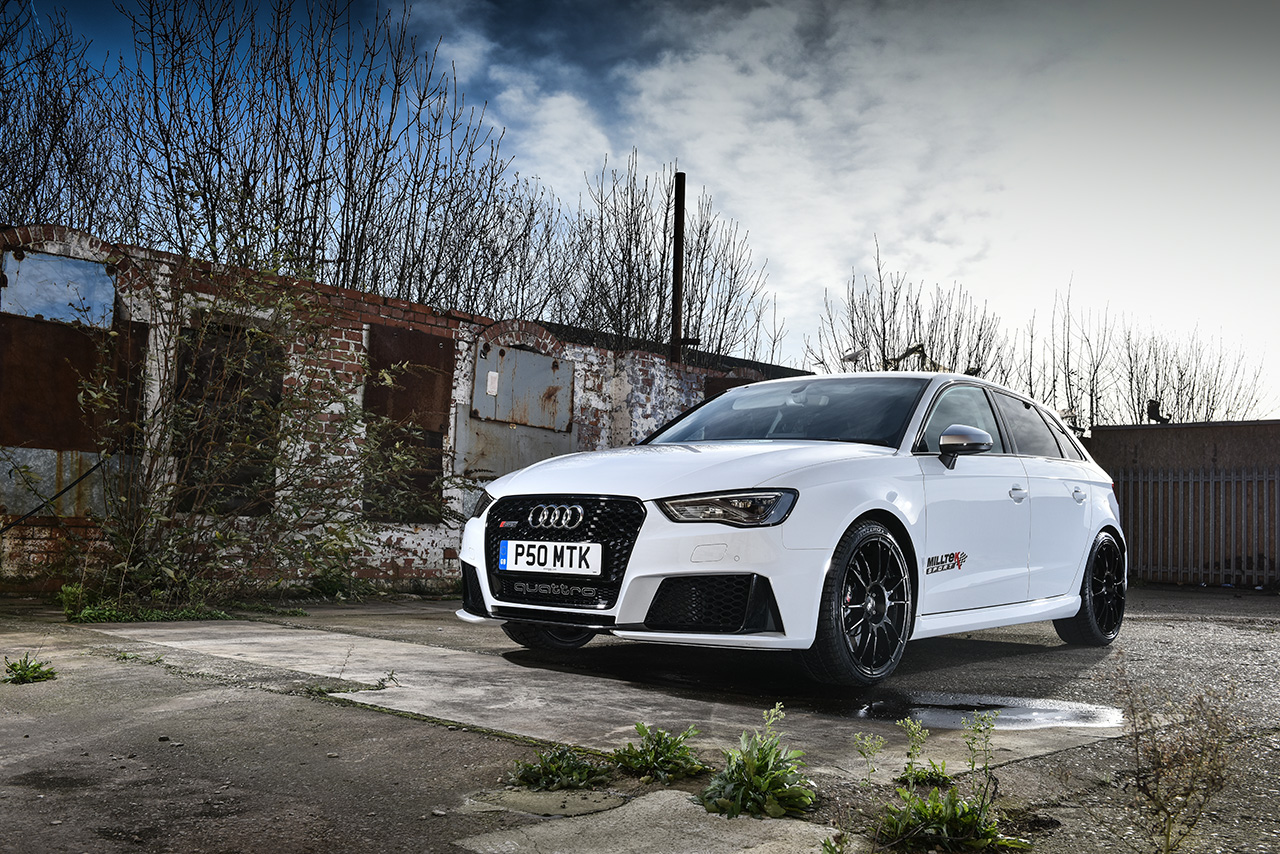 “We’ve something of a reputation when it comes to messing around with fast Audis,” explains Milltek’s MD Steve Pound. “In fact we’ve owned and modified pretty much every high performance Audi of recent times and have always managed to get great results from them, so why change the formula?” 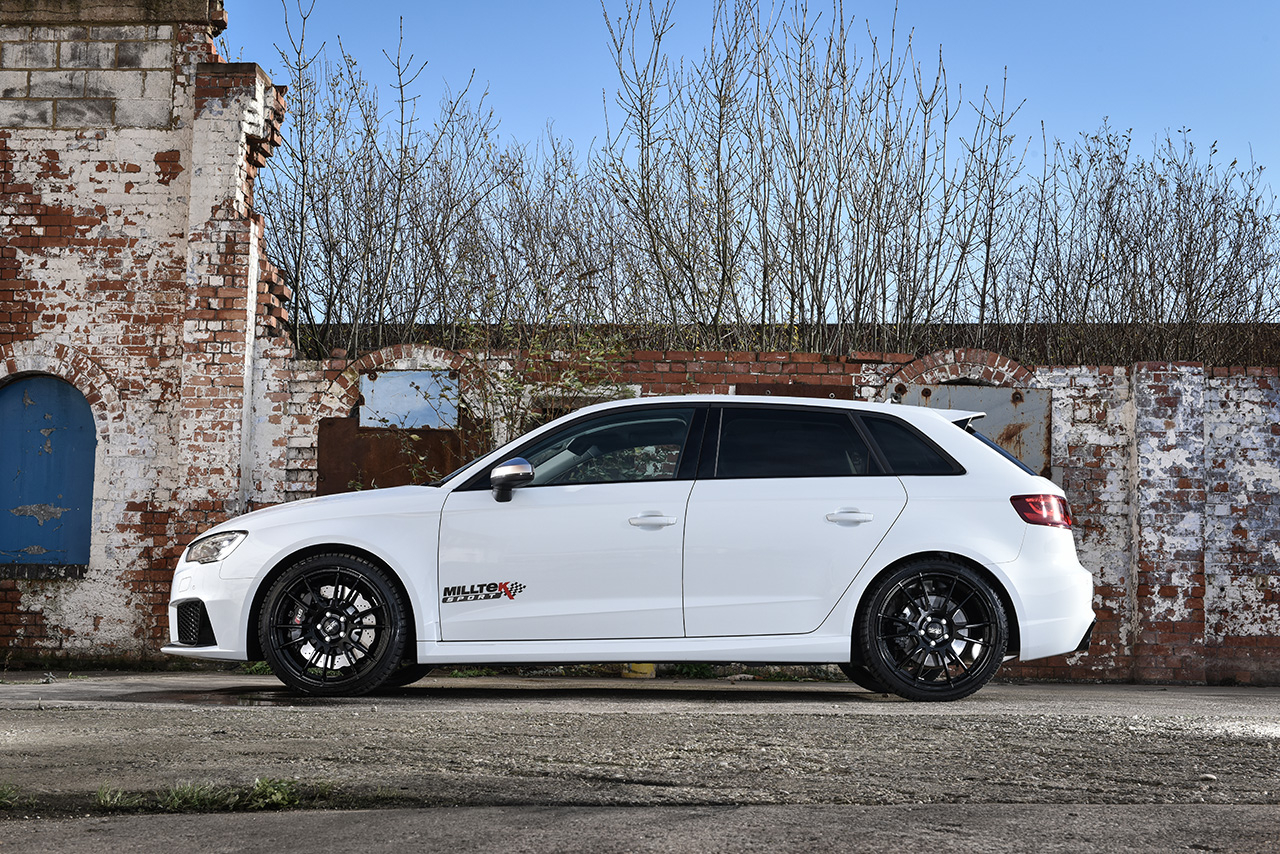 The team were already in a fairly advantageous position when they came to modifying the car then, and things only got better when they got to grips with its fantastic stock specification. Audi’s use of five cylinder engines in its performance models is now something of a company calling card, and the RS3 is a case in point. The 2480cc lump fitted to the latest generation is one of Audi’s best to date – just as happy delivering the goods while powering round a track as it is pottering round Milltek’s locale – Derby city centre. Of course, the guys at Milltek were never going to be satisfied leaving it as Audi intended, not when they had everything they could ever need to create an OE-beating exhaust system right there, just itching to be used. 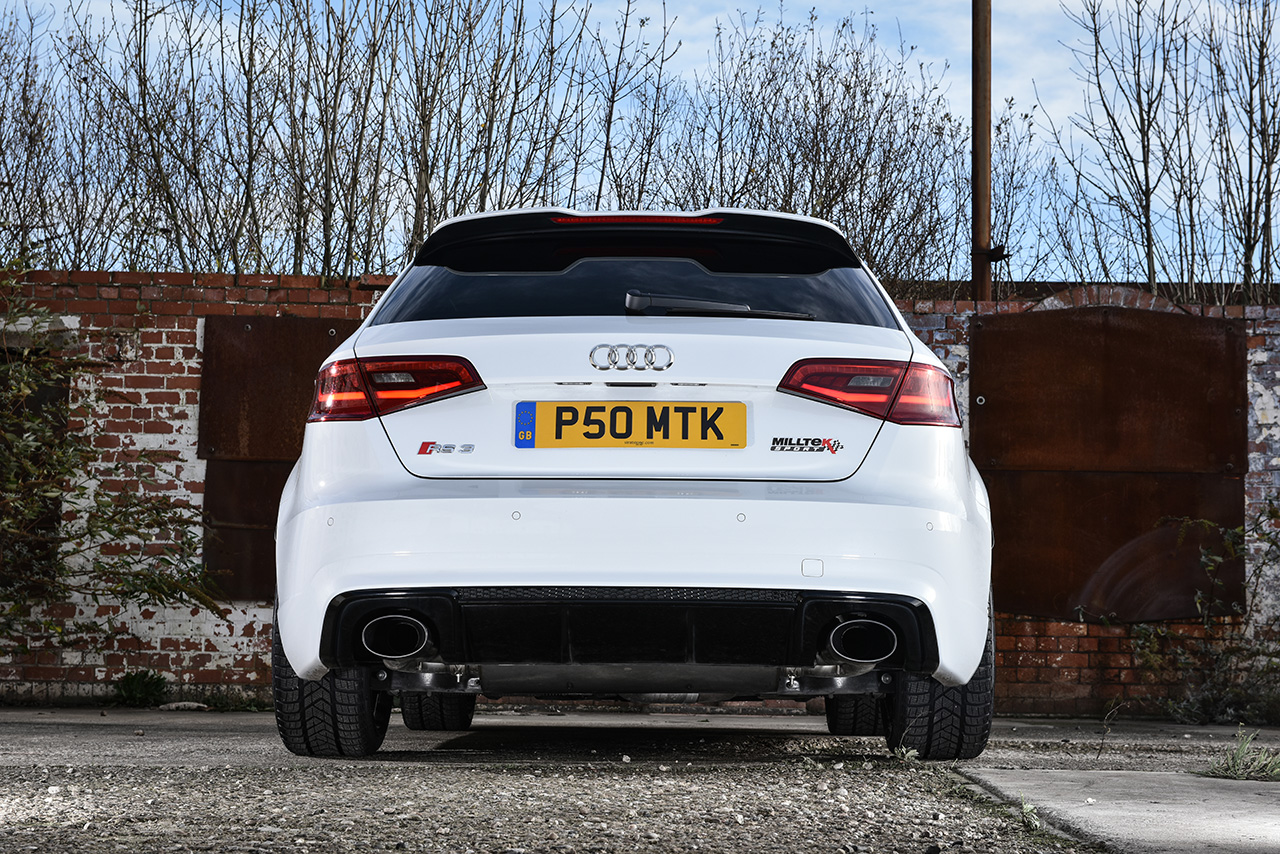 “A fresh demo car is a very much a blank canvas, and the temptation to throw caution to the wind and go wild is always there, but we knew that carefully considered moderation was key with this one,” muses Steve. “We didn’t want to render it unpleasant to drive on the road by going too far.” 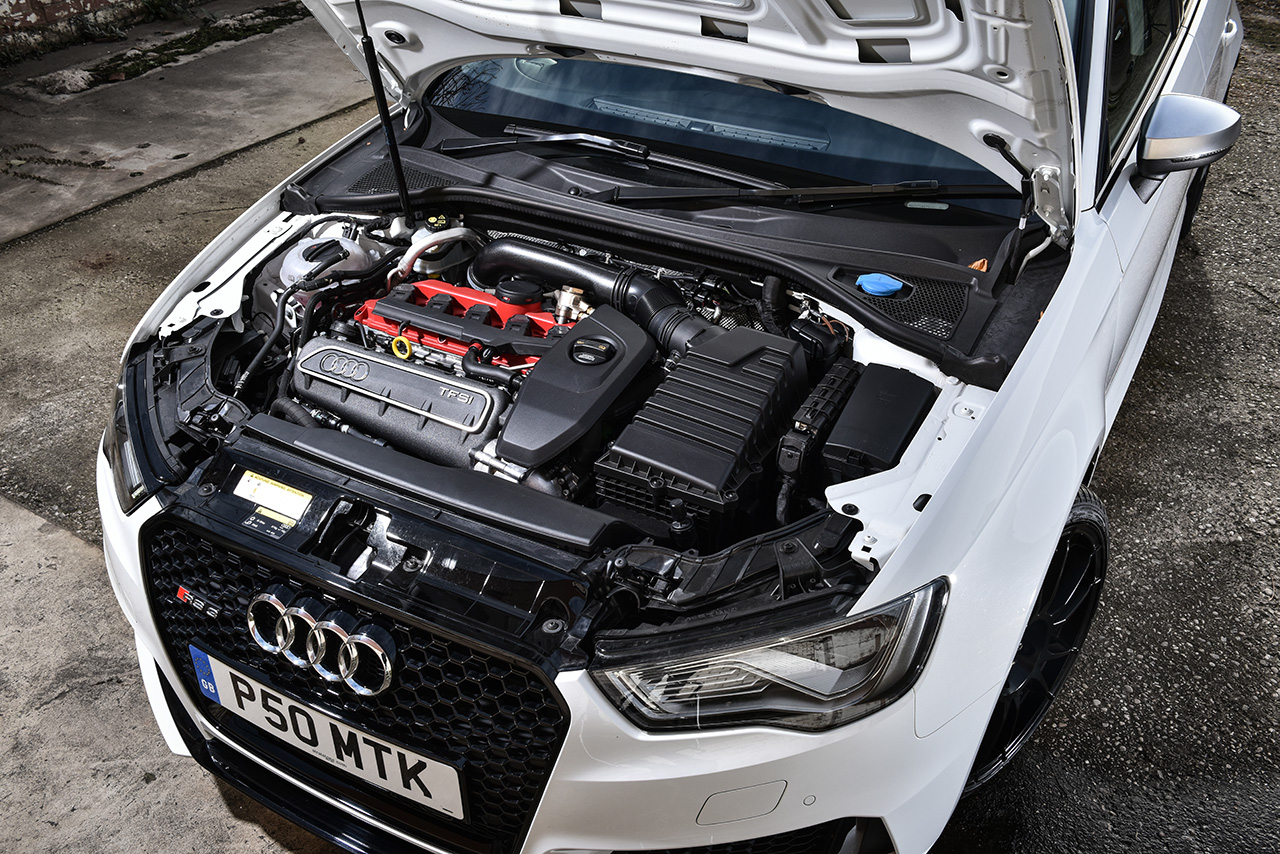 The exquisite system now snaking its way from the back of the block, down the centre of the floorpan and out of the rear valance is the result of months of intensive research and development, and it’s one that Milltek are justifiably proud of. Making a roaring, snorting exhaust isn’t exactly difficult, making one that manages to be both aggressive yet practical on a daily basis, well that’s a much trickier proposition! Closer inspection reveals a neat, turbo-back stainless steel system with a 200 cell high-flow cat and electronic valves integrated into the factory drive select system. Getting the latter to work with Audi’s own control unit was no small feat, and the fact that it works and functions so seamlessly should be proof not only of Milltek’s affinity with Ingolstadt’s finest, but also the benefits of having a design and production base rooted solely and squarely within the UK. 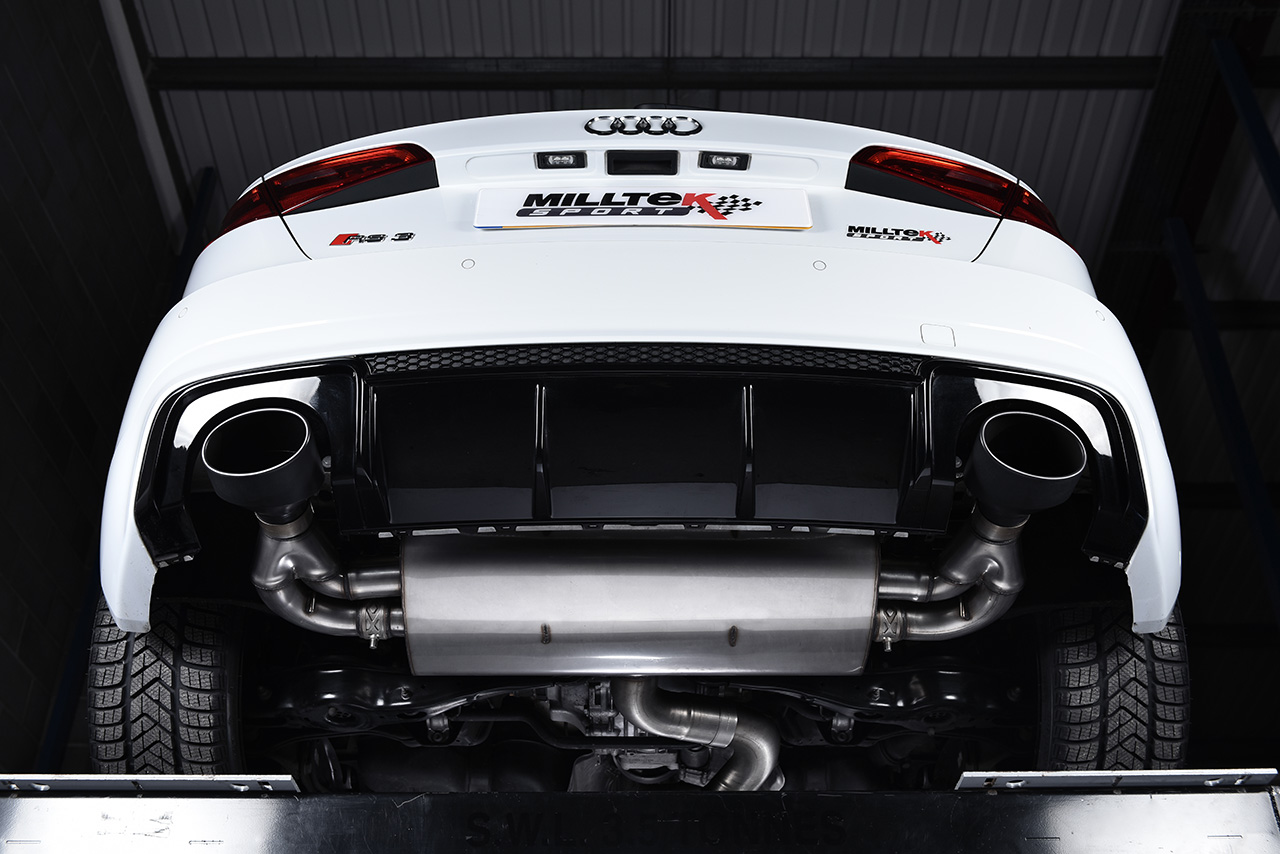 Milltek’s innovative HollowTek construction methods have also been employed throughout and these lend the system a number of very distinct traits. The combination of reflection plates and varying lengths of solid and perforated internal tubing creates distinct chambers within the silencer, and these work to cancel resonant frequencies and to effectively eliminate drone at cruising speeds. The casings around the silencer are also unique to each application and help sculpt the acoustic chambers that give Milltek exhausts such a superb sound, while also allowing them to run smaller silencer boxes and achieve lower weight figures. HollowTek can even be used to build a beefier, deeper and more sporting sound on modern forced induction engines, while also enhancing the pops and crackles that make over run such an entertaining aspect of modern modified car ownership. 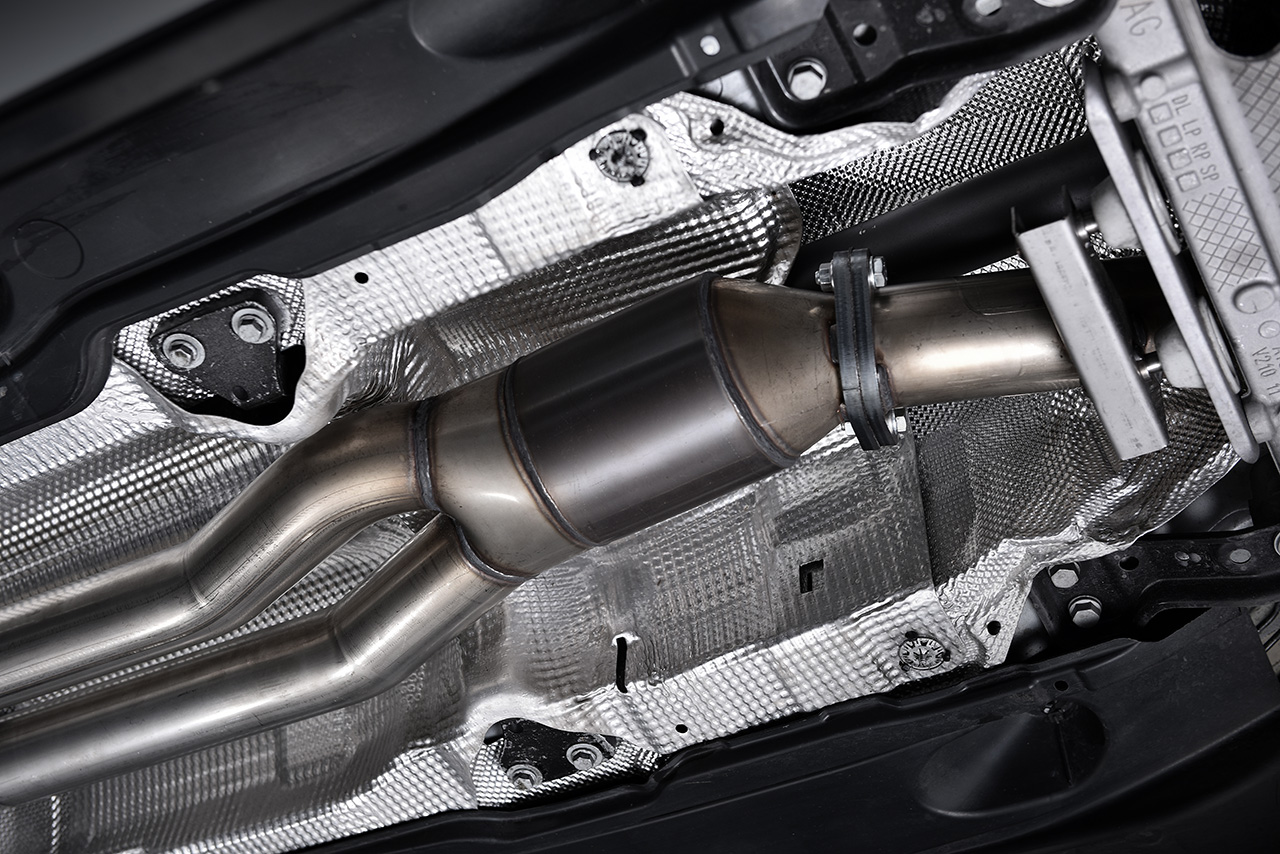 The RS3 was dispatched to the track the moment the new system was securely in place, the ideal proving ground for a car of this nature. The real key to Milltek’s success is the way in which their systems go about their work and the exhaust note that they emit, the latter being about as far removed from the deafening bellow that characterises cheaper, lower quality offerings as it’s possible to get. Exhaustive on track testing of the Milltek RS3 revealed that those countless hours spent developing the turbo-back setup had not been in vain, the system emitting a wonderfully balanced note and allowing the hard-charging five-pot to exhale freely and smoothly. 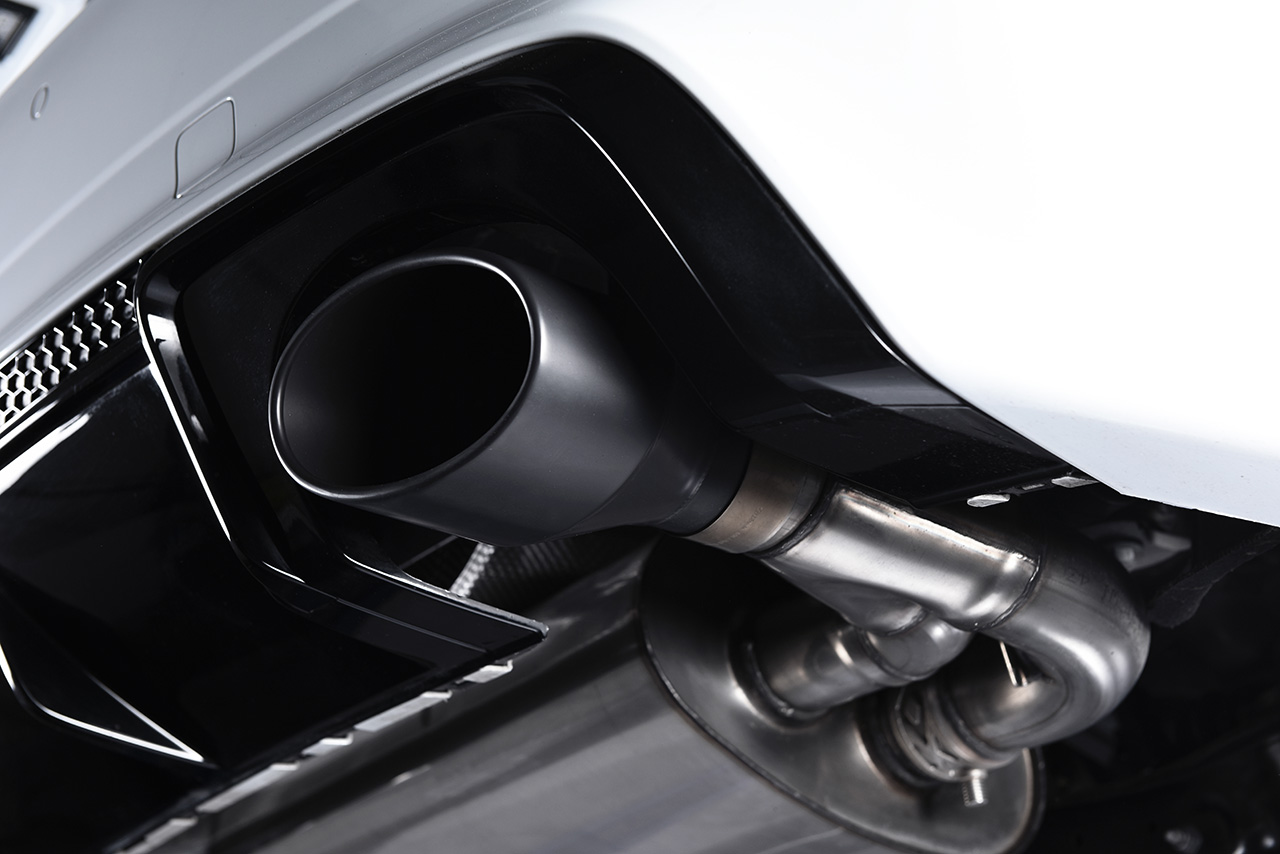 The hard working car was then left in the capable hands of Revo, Milltek’s tuner of choice and a firm with an equally thorough knowledge of fast Audis and how to make them go even quicker. Boost, fuel and oxygen parameters were carefully managed and the power figure continued to rise, finally topping out at a deeply impressive 440bhp and 400lb/ft – not bad for a remap and an exhaust combination! 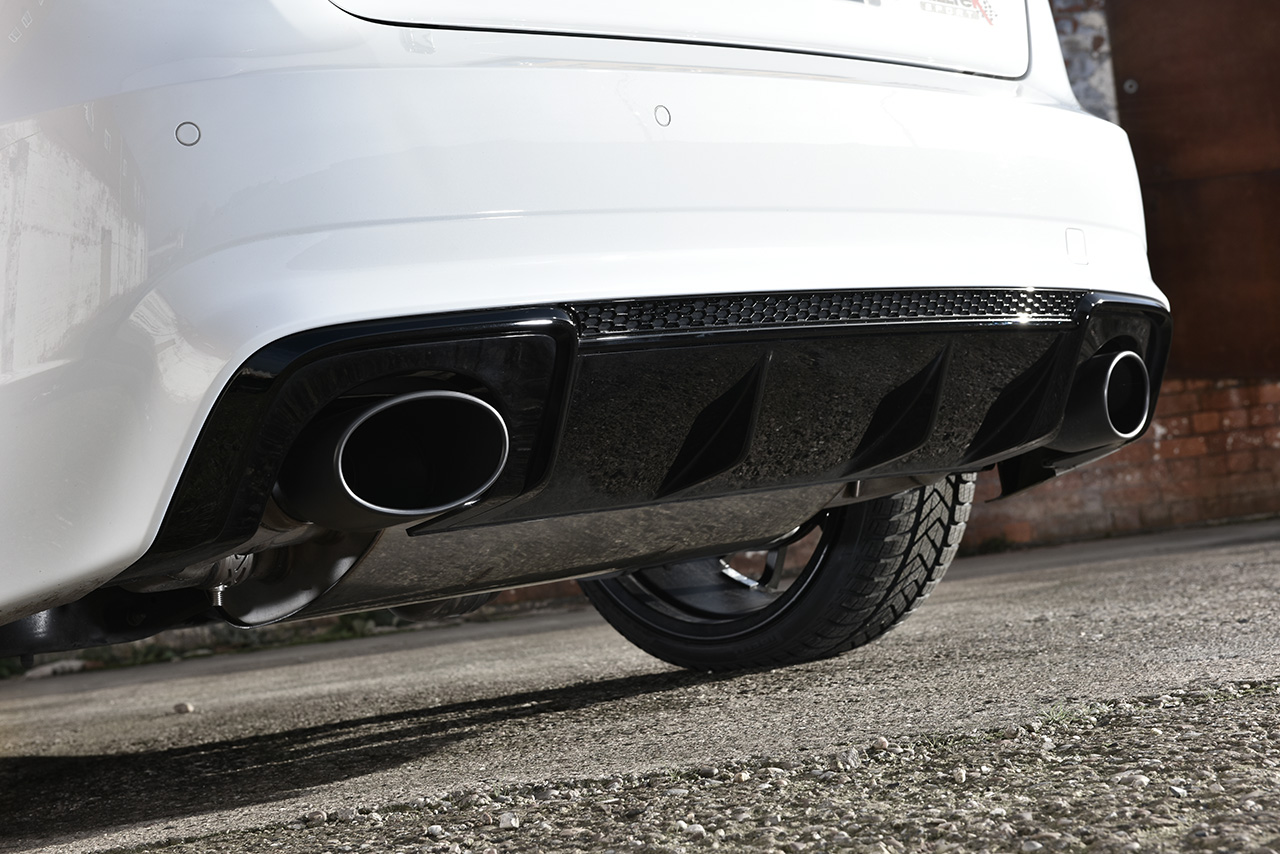 Of course one of the best things about choosing a system from a bespoke exhaust builder like Milltek is the almost endless scope for customisation that’s a part and parcel of the process. Prospective customers can select the full kit (the one that does such a sterling job on this very RS3) or from a number of partial systems designed to accommodate the needs and specific tastes (or indeed, budgets) of Milltek’s extensive customer base. It’s also important to note that every new Milltek product receives the same comprehensive on -rack shakedown to ensure its reliability and suitability, and that all are then given a further tuning session to check that they meet strict UK road decibel limits. 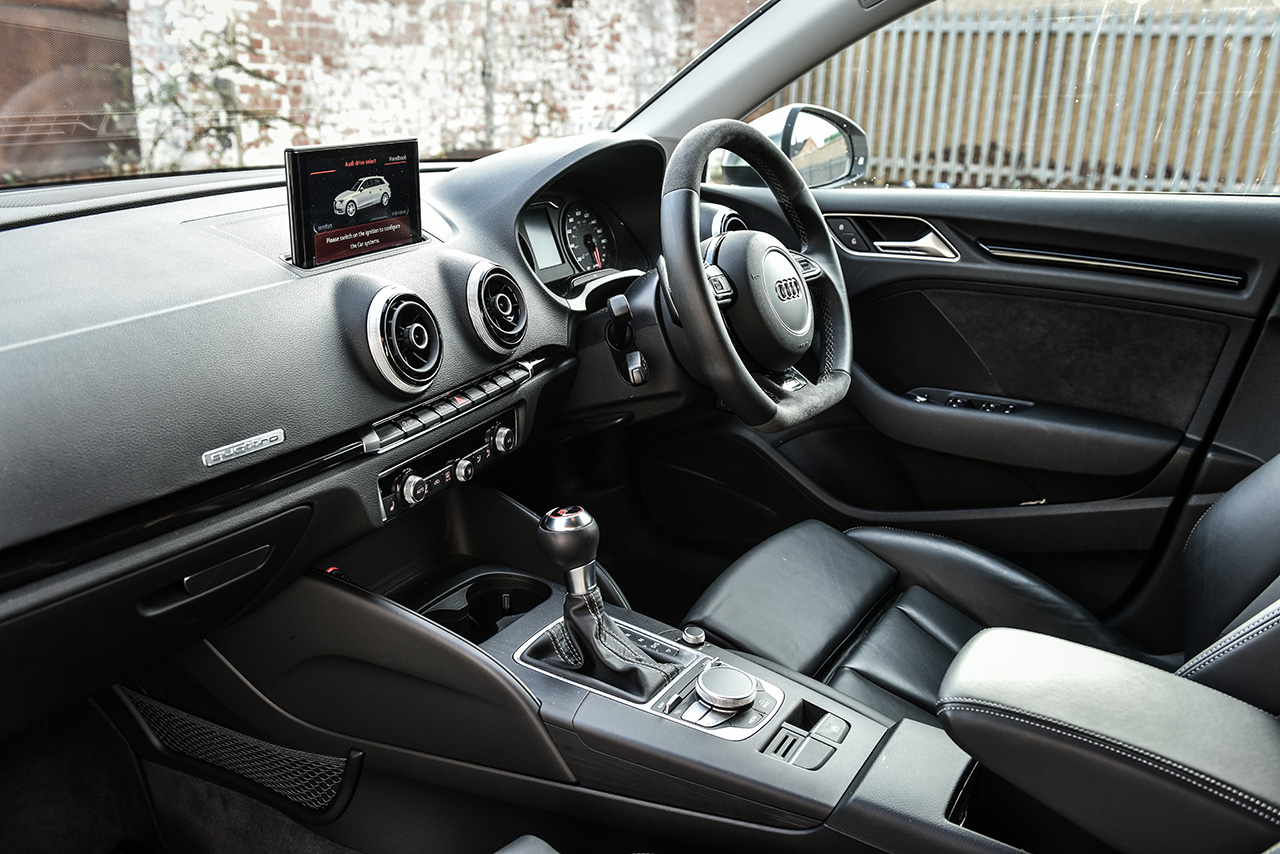 “That’s been one of the most enjoyable parts of building this particular Audi, actually,” smiles Steve. “Knowing that everything we did would eventually filter down to our wider range and that our customers would feel the benefit.” 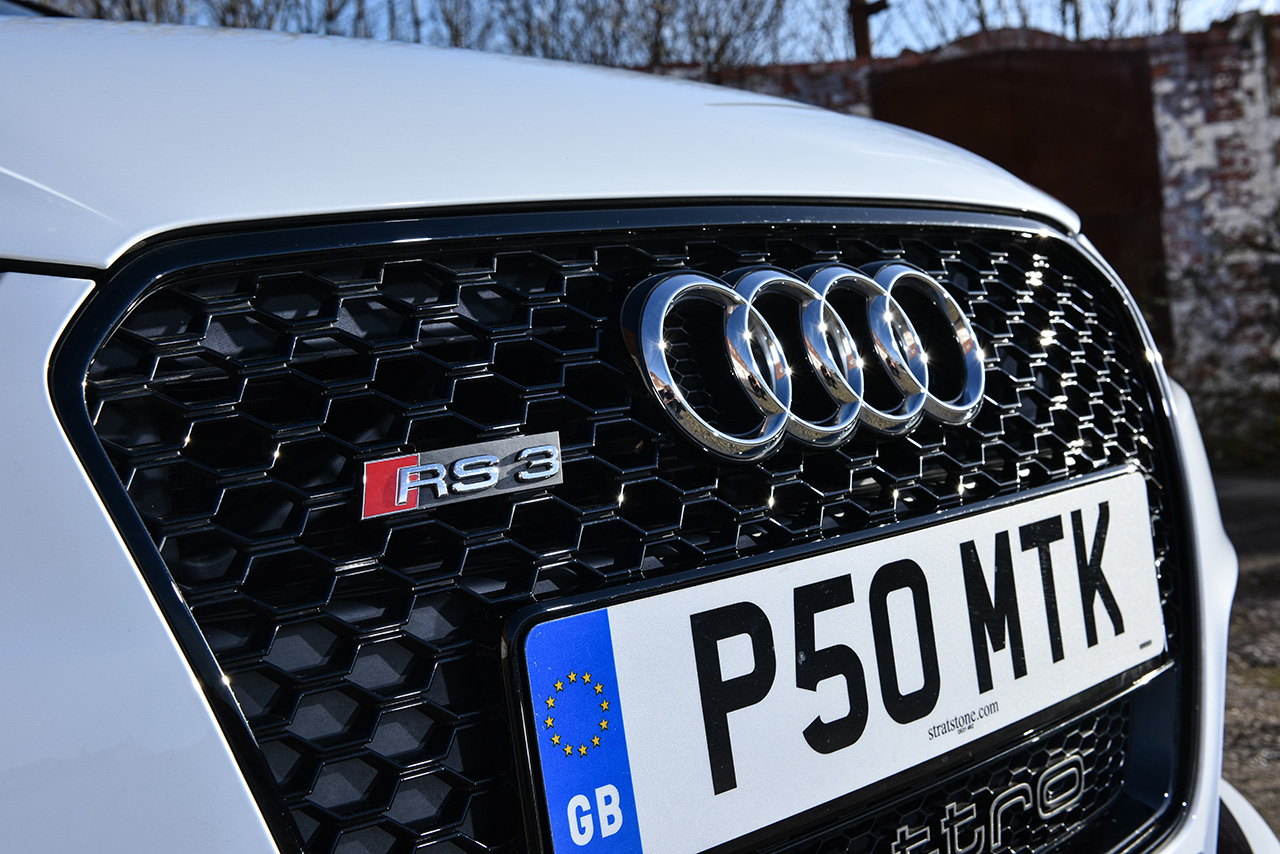 Milltek also made sure to address other areas of the car, with the chassis coming in for particularly intense scrutiny. The factory wheels soon made way for 8.5x19in OZ Racing Ultraleggeras, a timeless wheel that looks right at home on pretty much anything you care to mention, while a custom set of Goodridge Phantom braided brake hoses were drawn up and fitted at the same time. The whole chassis was then carefully aligned to make sure that this RS3, now one of the best realised in the UK, was able to make the most of its new found grunt. 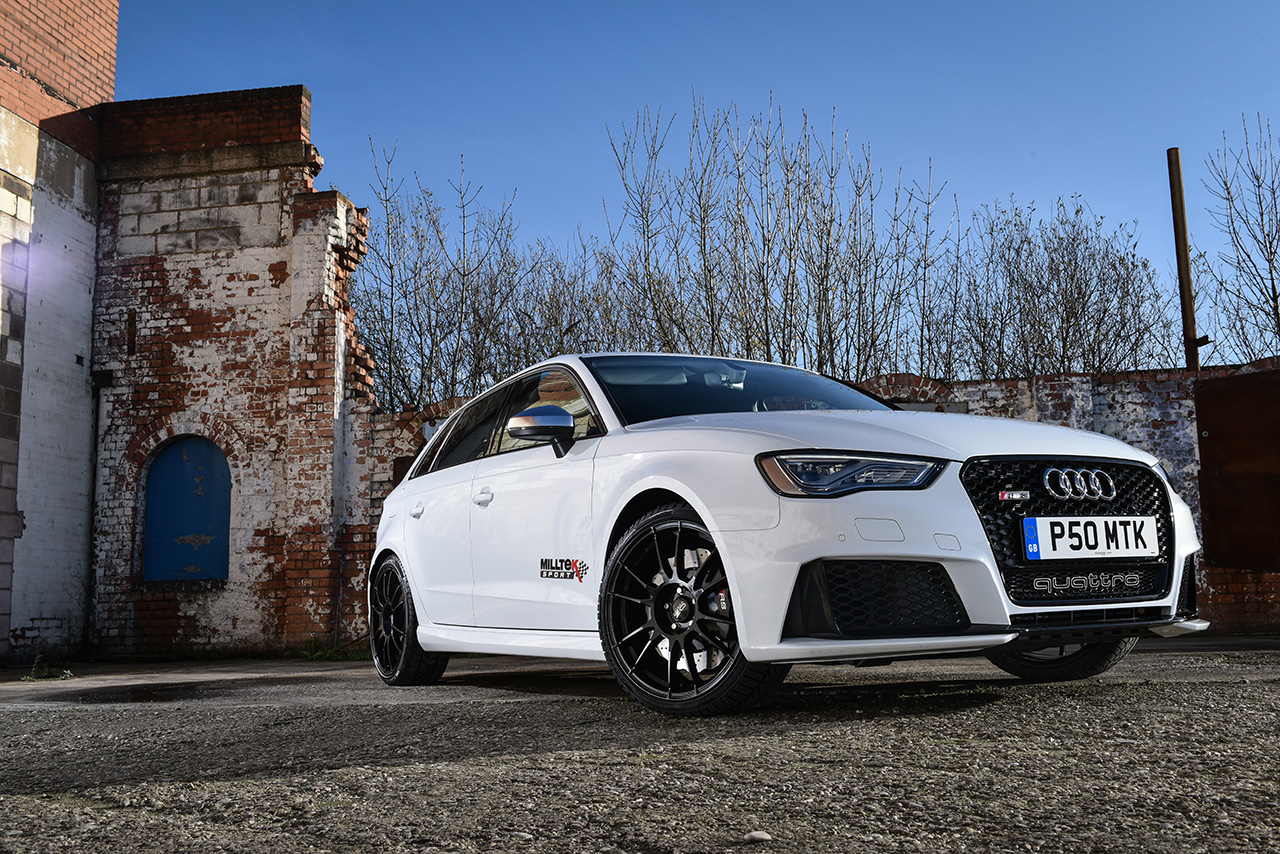 The end result of this comprehensive development programme? A remarkably balanced and well realised car that can use every bit of its performance at any given time. The note pushed out by the Milltek system is nothing short of arresting and, because it’s been designed to work in conjunction with Audi’s own electronic valve control and resonance technology, it can be toggled to suit your mood and environment. Want to pay tribute to the Group B Audi heroes of old? No problem, flick the switch and you’ll be doing the full Walter Rohrl within seconds. Had your fun and now need to collect the kids from school without incurring the wrath of the entire PTA? Again, no bother, re-adjust the system and you’ll be quietly burbling around in a manner that’s so subtle it borders on the spooky. If nothing else Milltek’s RS3 proves that, in car terms at least, you really can have your cake and eat it too.