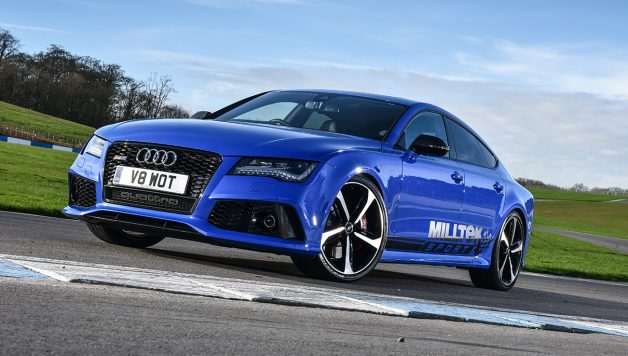 Audi’s reputation for identifying, naming and creating automotive niches is fairly well-known by now, and the firm’s recent history is littered with examples of them striving to create new model segments and types, some unqualified successes, others less well received (the all aluminium A2 being a case in point). One of the more recent examples is the RS7, something of a cross between a traditional, three-box executive saloon, and a coupe. Niche-busting styling aside, the RS7 is a stonkingly good, phenomenally capable car, particularly when you factor in its supercar-bashing V8, a combination which results in an executive express that’s able to mix it with the very best from the likes of Mercedes, BWW and Jaguar. Despite its undoubted capabilities and potential, modified RS7s remain a rare sight, making Milltek Sport’s example, the car you see here, all the more special and worthy of closer inspection. 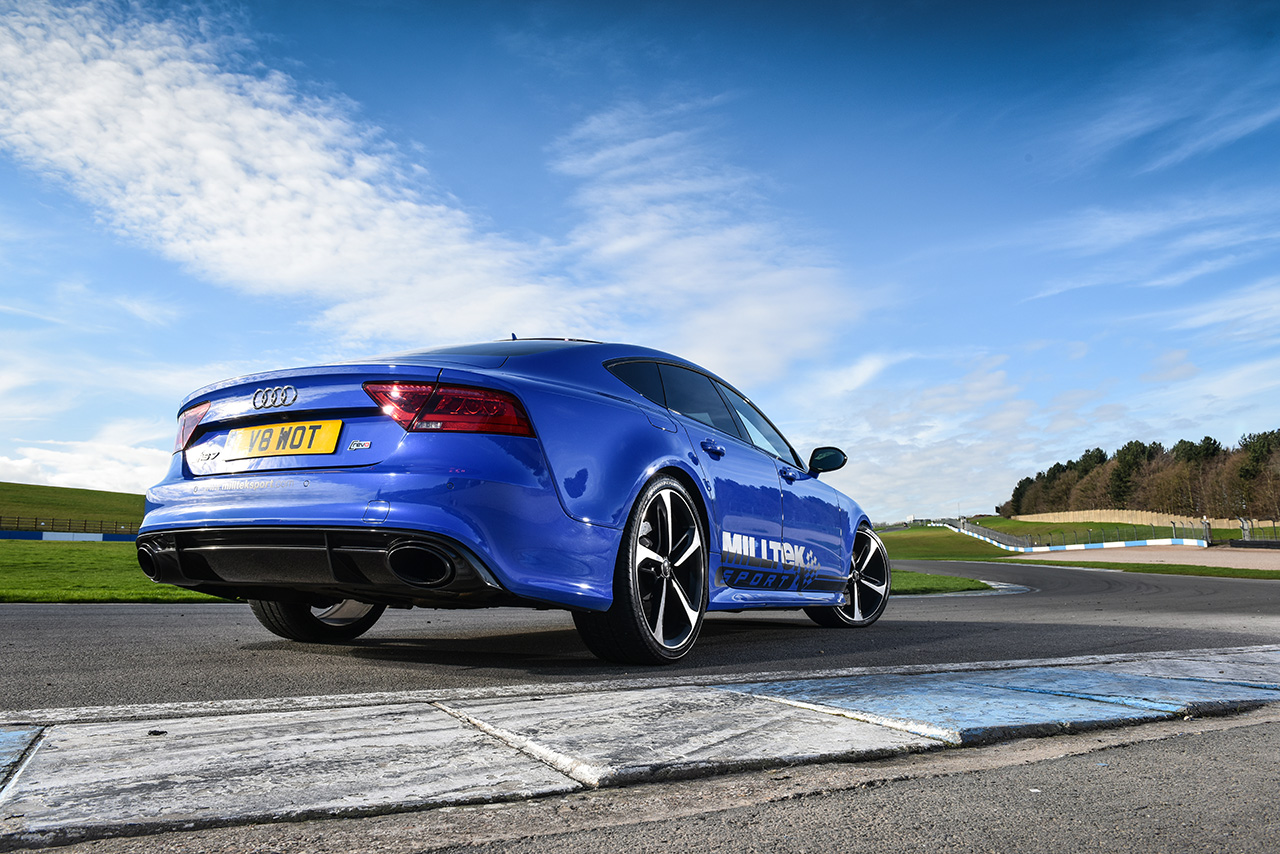 “The market for big, plush executive cars with equally big, powerful engines has never been bigger or more competitive, and this means that there’s a correspondingly healthy demand for tuning packages to take these cars to the next level,” explains the MD of Milltek Sport, Steve Pound. “We bought this car standard a few years ago with the intention of adding a few minor bits and pieces, and it’s evolved steadily since then.” 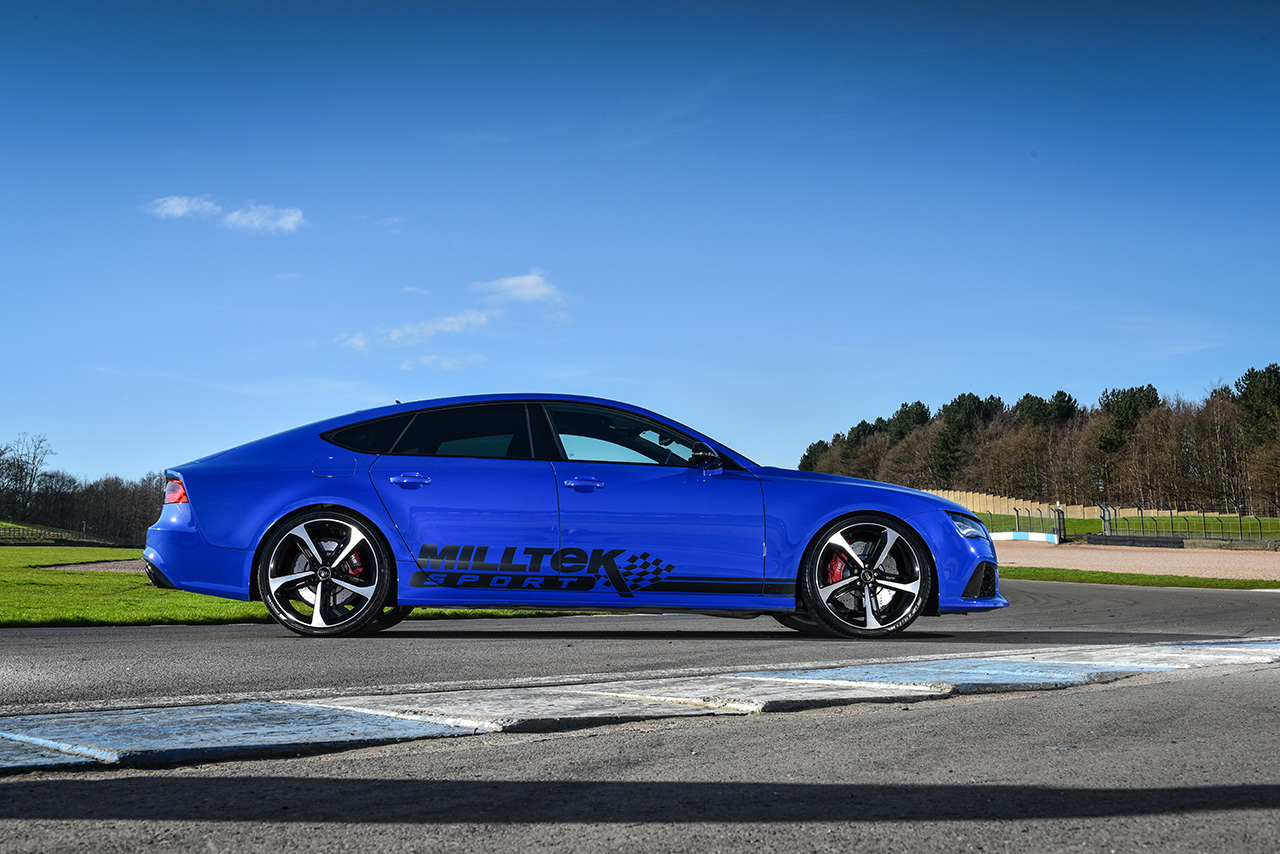 Key to the RS7’s ability to cover ground in a manner that makes anything short of a fully paid up supercar blush, is its quattro drivetrain and a thumping great twin-turbo V8 engine. Both are very much known quantities and both are now part and parcel of the Audi lexicon, the former having been instrumental in the firm’s breathtaking transformation from maker of slightly quirky saloons, to a genuine Merc and Beemer rival. Pairing the two was always destined to produce something a bit special then, but the effect is only heightened when the car in question looks so restrained stylistically. What’s been created is something close to a football hooligan in a Savile Row suit and some ultra high end cologne; all the latent aggression is still there and undiluted, it’s just been squeezed into a respectable, stylish package.

“We started off by removing the factory system to get a good look at what we had to work with and how much space there was under the car, from that we devised how best to go about building a replacement.” 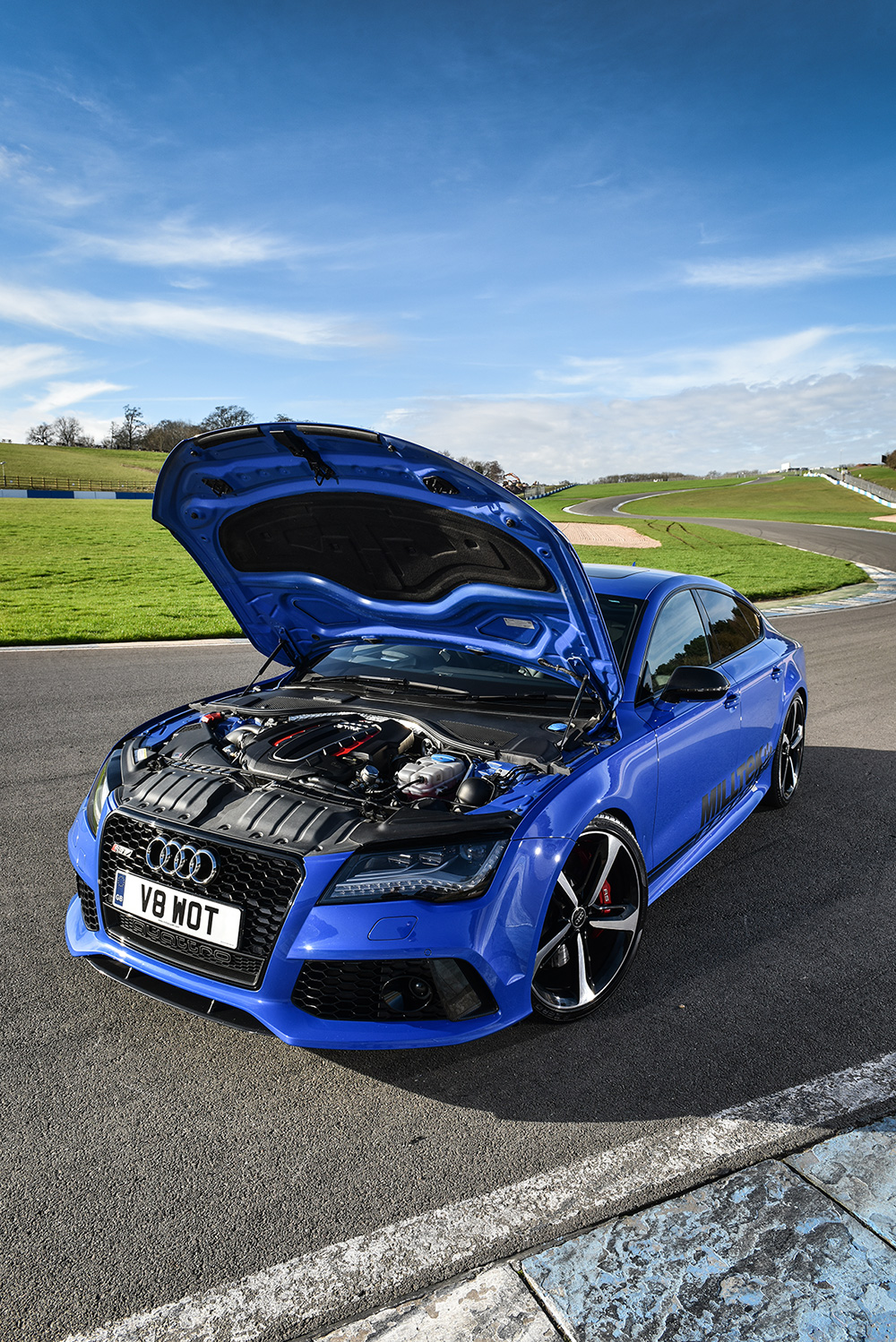 The Milltek boys are no stranger to this aftermarket exhaust lark, indeed, their exhausts have graced the undersides of some of the most exotic and complex cars of the last thirty years, so actually drawing up a system for the RS7 didn’t post too much of a problem. Deciding what form that system would take though, that was somewhat trickier. In the end Steve and the gang plumped for a pair of 3in Cerakote semi-gloss coated downpipes and 100CPSI under-car cats, leading to a Milltek Sport 2.75in non-resonated cat-back exhaust, the latter utilising the OE Audi Drive Select-controlled valve assembly system to give a note that’s utterly menacing and perfectly suited to such a big, purposeful car. It’s a setup that, like the vast majority of Milltek systems, manages the trick of being aggressive without ever becoming too loud, annoying or a pain to live with on a daily basis. Again, this is something which sounds like it’d be a relative doddle to achieve (on paper at least) but the reality is rather different. Go too far, pick a pipe with too wide a diameter or otherwise get carried away, and you’ll be left with a system that wouldn’t sound out of place blatting away down Southend seafront circa 1999. That might well be fun for all of half an hour or so, but the reality of living with it on a daily basis would soon hit home and would very quickly become more than a little annoying, possibly even a tad embarrassing. 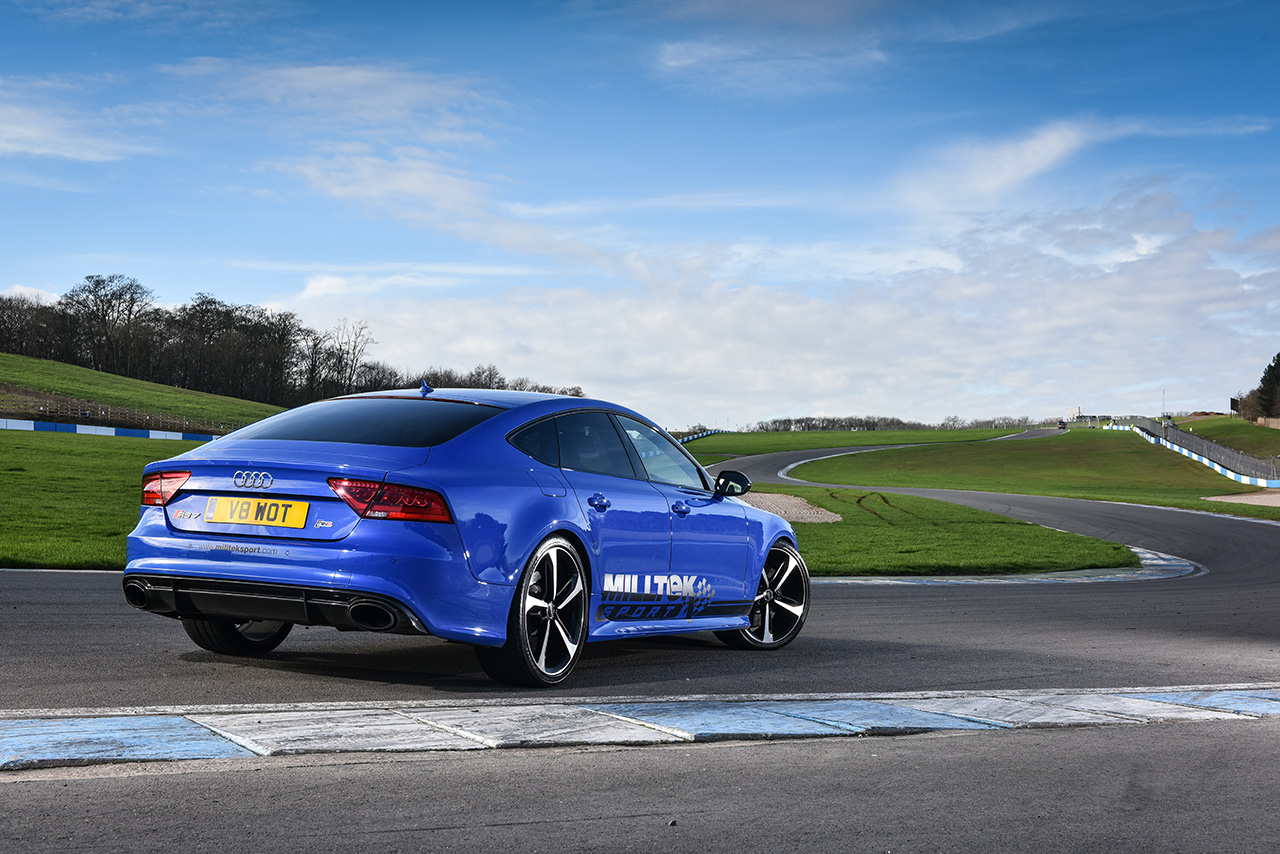 Milltek Sport demo cars have always been more involved and better realised than a simple bolt-on exhaust job though, and the RS7 is no different. The big Audi’s force-fed 4.0 V8 now breathes deeply through an aftermarket induction setup from the inlet specialists at ITG, while a Revo Technik Stage 2 remap re-jigs its parameters and allows it to fully exploit the newly bolted on go faster hardware. These carefully chosen tweaks and changes work together in a fashion that’s nothing short of OEM standard, and the result is that Milltek’s RS7 can belt out 664bhp and an earth-rotating 904nm of torque, hefty, hefty numbers. 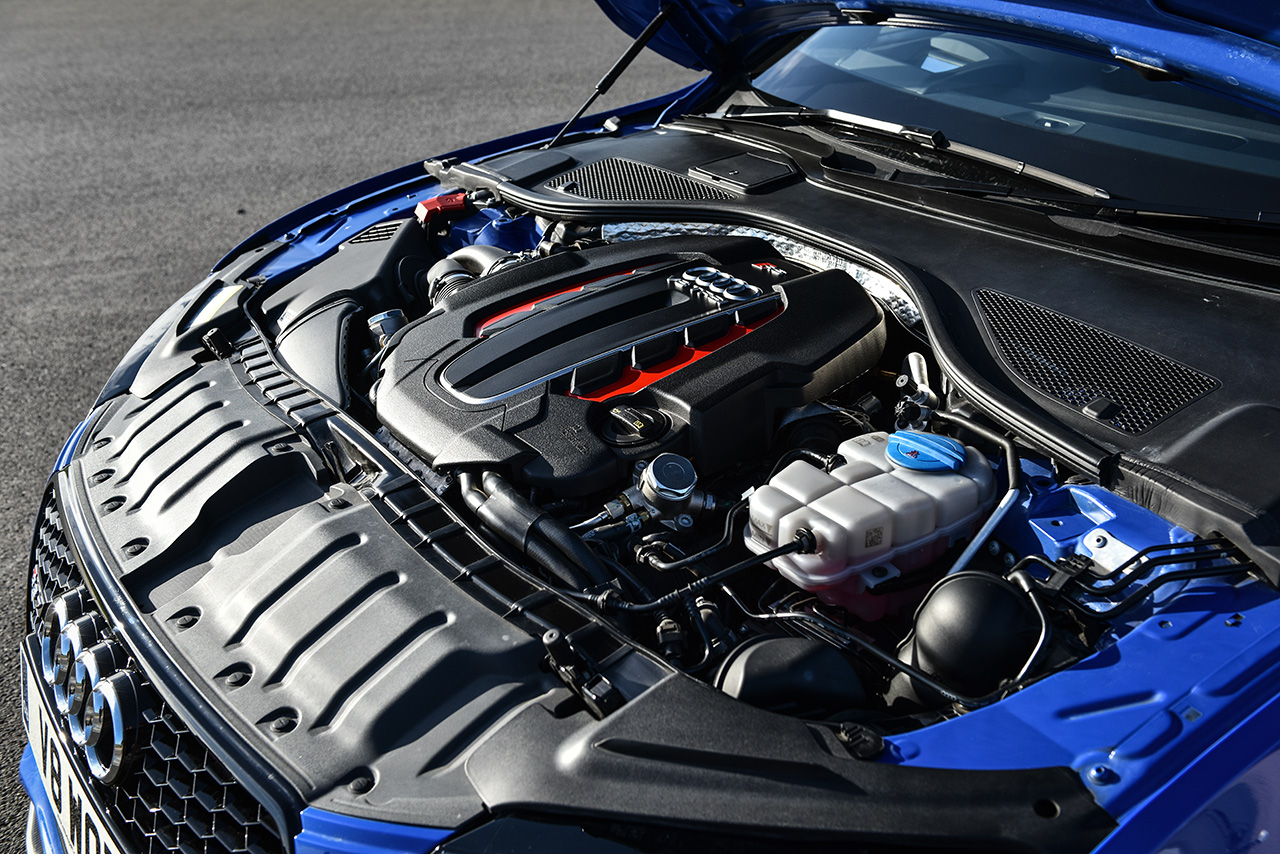 “The aim with this car was to get it to make big power without detracting from its executive origins,” muses Steve. “I think we’ve pretty much succeeded, it’s hugely powerful by anyone’s standards and there’s scope for even more if we feel the need, but it’s still a perfectly composed, completely useable car.” 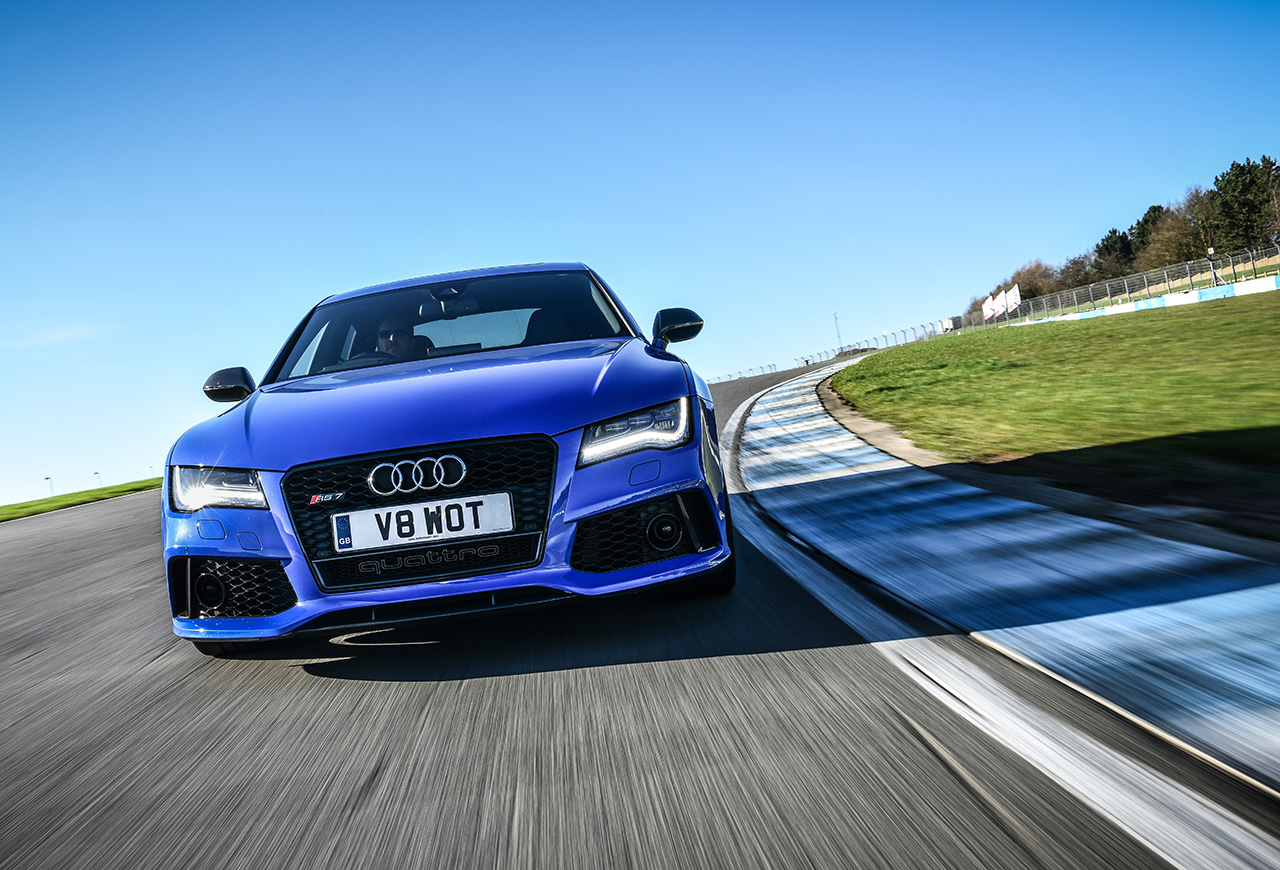 Audi’s quattro four-wheel drive system has long been a byword for sure-footed, stable traction (handy when cars like the RS put out such biblical power figures in factory fettle), but it’s only relatively recently that the boffins at Ingolstadt have managed to pair this with handling that’s also genuinely involving, and this is most certainly the case with this particular autobahn stormer. Of course there’s always room to improve upon a factory fitted suspension setup though, and the guys at Milltek wasted no time in getting to grips with the H&R suspension range, eventually opting to order and fit a set of their excellent lowering springs. This explains the uber Audi’s subtly aggressive stance, the nose 30mm closer to the ground, the rump a mere 20mm. The stiffer, shorter springs also help to lower the centre of gravity, sharpening the RS7’s already impressive handling and generally blurring the line between executive cruiser and supercar-baiter yet further. 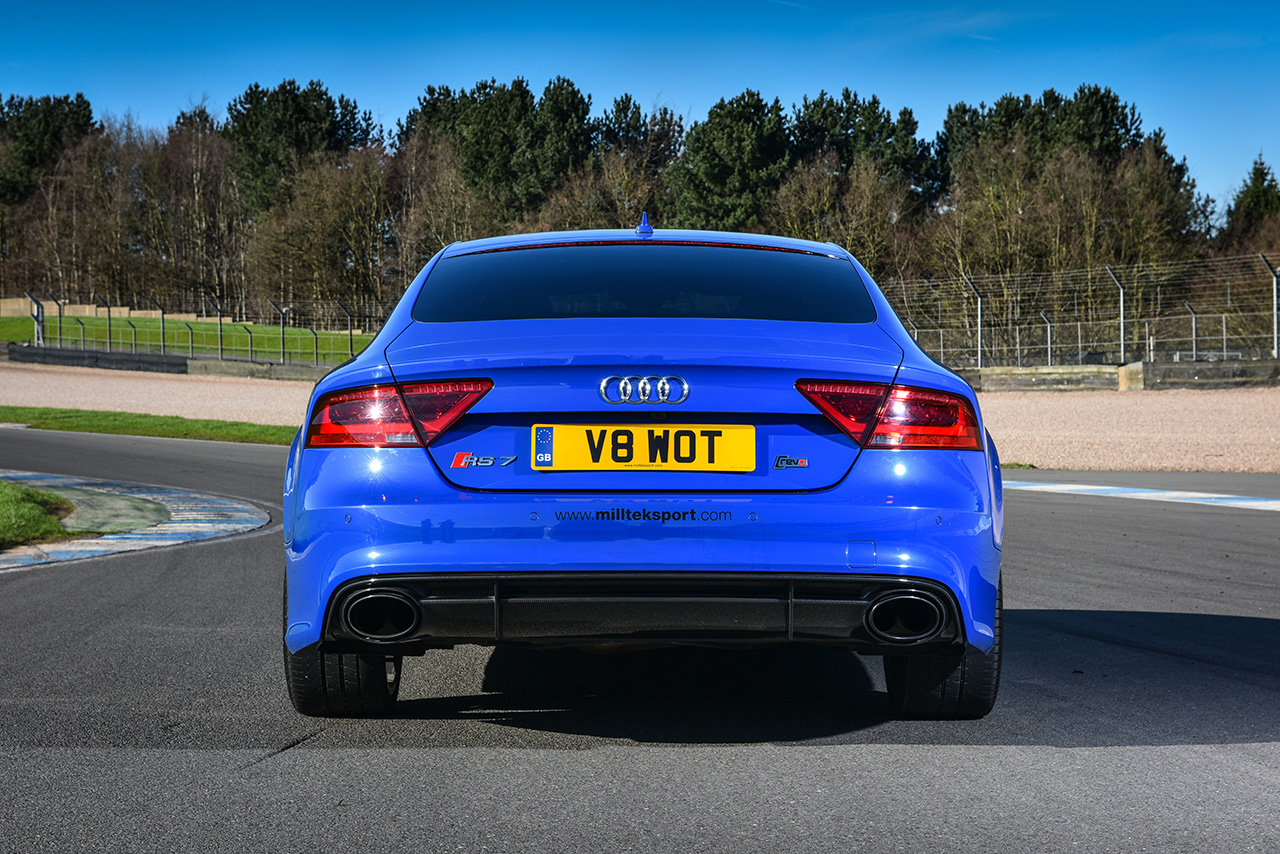 Achieving a degree of balance is probably more important in the executive car sector than any other, and it’s a balance that Milltek have struck perfectly with their RS7. Yes, it helps that the RS7’s styling is so crisp and well resolved straight from the factory, but there’s also no denying that Milltek’s careful, complementary approach to tuning has paid dividends. The result is a car that’s staggeringly powerful by anyone’s standards, yet still manages to retain the stock car’s understated, sleek appearance. Fancy building your own big-power executive bruiser? Best act fast, the market has never been better suited and your choice has never been better – happy hunting!