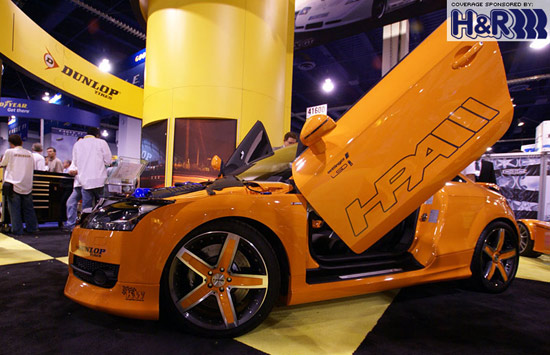 LAS VEGAS, NV, November 2, 2007 — The Specialty Equipment Market Association (SEMA) auto show in Las Vegas, NV brings out the best of the best in automotive aftermarket offerings. Each year a team of respected automotive journalists are put to the task to choose the top contenders for the Sony Gran Turismo Awards.

The “Best in Show” award was personally selected from the five category winners by Kazunori Yamauchi, the famed creator of the racing game franchise, and announced at the 2007 Gran Turismo Awards gala hosted by Sony Computer Entertainment America Inc. on November 1st, at Tryst night club inside the Wynn Hotel & Casino. The party featured an exclusive concert by singer/songwriter, Chris Cornell performing hits from Soundgarden, Temple of the Dog, and Audioslave, and an opportunity for guests to test their driving skills on an early version of Gran Turismo 5 Prologue prior to its 2008 release.

“The 2007 Gran Turismo Awards showcases the collaboration between the automotive culture and the gaming industry,” said Kazunori Yamauchi, “We are proud to honour auto enthusiasts for their passion of cars, and to celebrate the automotive lifestyle that Gran Turismo embodies.”

The top award of “Best in Show” went to Marcel Horn, owner of HPA Motorsports Inc. located in Surrey, BC, for his 2007 Audi TT, earning a place in history as their vehicle would be immortalized in a future instalment of the Gran Turismo franchise. This is the second win for Horn’s company whose twin turbo Volkswagen R32 received the top prize at the 2004 SEMA show and is currently featured in Sony’s Gran Turismo 4 game.

“I am so proud of our entire team who were involved in the preparation of this car, and truly honoured to be chosen as “Best in Show”. The experience of driving this TT is like being in a video game; the power delivery is so smooth and effortless that before you realize it, you are exceeding 160MPH,” said Marcel Horn.

Photos and text from vwvortex.com