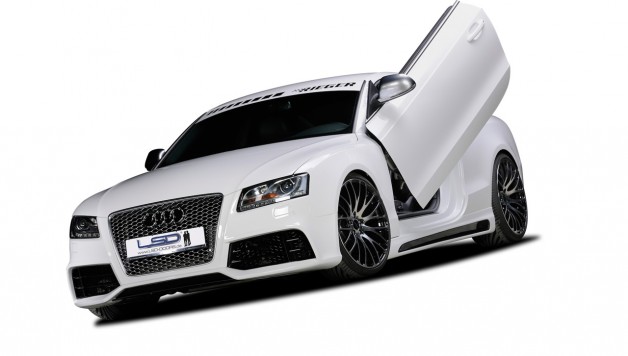 Gull-wing door plates for Audi A5 and S5

With gull-wing door plates by LSD, the Audi A5 and its sporty brother S5 become a real head-turner. LSD offers the hinges either as a complete set for both doors including hinges, cable set fitting materials and attachments for only 1749 Euro including VAT.

The plates are equipped with the new GRS+ (Guided Roller System). It offers an adjustment possibility with the roller guidance of the roller bearing integrated in the hinges and additional stability through a catch which that locks in fully-opened condition. This results in more safety and more precise opening and closing of the door.
LSD plates are delivered with a part certificate by the German Technical Control Board which ensures that the LSD gull-wing doors fulfil all security standards.

Compared to other retrofit-sets for gull-wing doors, the LSD plates “made in Germany“ impress with a fully developed technology and the highest-possible quality standard. Moreover, a test laboratory accredited by the Federal German Transport Authority confirmed in a side crash-test that the LSD-solution which is patented in Germany is as safe as any serially fitted door. That means that passenger safety in a side crash is guaranteed according to guideline 96/27/EG by the LSD hinge system. LSD enables an easy and quick assembly without welding or painting works and impresses by its perfect fitting accuracy due to its three-dimensional adjustment.

The LSD plates are fitted to the original door attachment points of the dismantled original plates. After the assembly, the otherwise unchanged original door first opens outwards and then securely guided and damped upwards. Adjustable plates stop doors from opening too far or from falling inwards or downwards when opened. And also, it only takes one grip to close the doors. The LSD gull-wing doors render a sensational look to any car and are the ideal solution of fans of extraordinary tuning- and show cars. The LSD door plates can be obtained directly from LSD or from a specialist dealer.