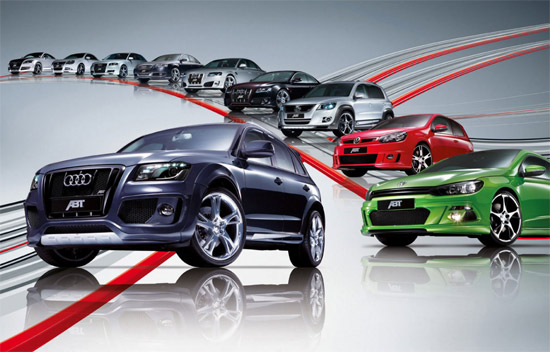 Good value and chic – the AERO complete package from ABT

When the designers of ABT Sportsline work on a vehicle, it is with the aim of giving the car its own character – and this must be recognisable from every angle. “In our design specifications it therefore states that all components, from the wheels to the exhaust unit, have to be perfectly harmonised with each other”, explains Hans-Jürgen Abt.

The general manager of the company from Kempten with a long tradition knows what customers expect: “A perfect vehicle, nothing more and nothing less.” As a result ABT Sportsline now offers coherent AERO packages, which comprise all the available bodywork parts, ABT springs, the typical 4-pipe rear muffler and a combination of premium-dynamic ABT alloys and sports tyres to suit. All the components are, of course, precisely tuned to each other, but what is special is the price. This is shown in two examples.

1st example: VW Golf VI
With the ABT AERO package the Golf VI receives the following ABT components: front grill, front spoiler, side skirts, the rear skirt set consisting of the 4-pipe rear muffler and the rear skirt, as well as the rear spoiler. The Springs and the wheel set with 18 inch AR alloys and tyres with the dimensions 225/40 R18 are also included.

2nd example: Audi TT
For anyone wishing to have their current TT tuned with the AERO package from ABT, the tuner from Bavaria covers the following components: front grill, front spoiler, side skirts, rear skirt set (consisting of a rear skirt and the 4-pipe rear muffler), rear wing, springs and a complete wheel set (19 inch BR alloys, high-performance tyres with the dimensions (255/35 R19). With the AERO package the TT is transformed into a real ABT.

The TT and the Golf VI are of course not the only models, for which ABT is offering its lucrative AERO package – the all-inclusive, worry-free offer is also available for the Audi series A4, A5, Q5 and Q7 as well as the VW models Polo, Scirocco, Eos, Passat, Tiguan, Touareg and T5. The company from Germany has not just developed tailor-made design packages so that cars can look dynamic and sporty, but has also developed diverse options for performance improvements with ABT Power and ABT Power S. For if it says, ABT on the outside, ABT should also be on the inside.