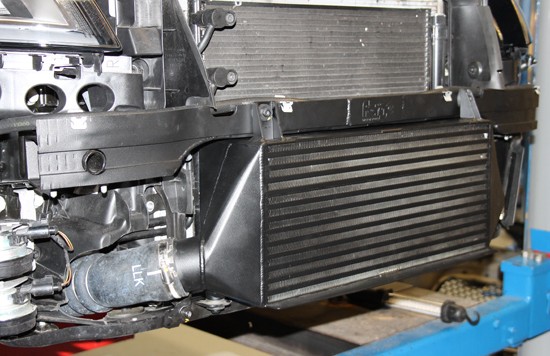 As one of the leading lights in the VAG tuning scene, Forge’s decision to develop a bespoke intercooler upgrade for Audi’s immense RS3 is not really a surprising one. What is surprising however, is just how much of an improvement they have been able to create over the standard set-up.

Using the knowledge and data amassed during the R&D of its TTRS kit, Forge’s design team knew where they needed to start with the RS3 set-up. Beginning with a significantly larger core size to allow for more surface area and cooling efficiency than the stock core, the Forge part now uses up all the space the Audi had failed to take advantage of. Measuring in at a gargantuan 530x130x225mm and featuring a ‘bar and plate’ style core, the new intercooler’s end tank design also rather cleverly allows standard boost hoses to be retained for a simple and effective fitment.

Forge kits always include everything needed to effect a stunning transformation, and turning to a neat solution that the firm has used many times before, each one comes with a brand new, modified OEM crash bar as part of the kit, in order to adequately support this monster part.

Forge has taken even longer than usual during the testing and development of this part to ensure absolute perfection in operation, but also, because the team simply were not able to believe the dyno figures achieved during early testing, and believing it to be an anomaly, insisted on recreating the tests under different conditions and on different dynos. The case of the consternation was a fairly consistent gain of around 40bhp – on a standard car – with a standard map! Figures usually only reserved for cars running bespoke software and other uprated components.

Temperature drops of 25° C at the intercooler outlet compared to stock were also recorded (The stock ‘cooler peaked at 60°C, with the Forge unit only showing at 35° C in 21° C ambient temperatures) The intercooler inlet temperature dropped significantly too, compared to the stock core, indicating that along with reducing the differential pressure across the core, the turbo is not working as hard, to achieve at least the same – and often much better – results.

Total fitting time is under three hours and can be carried out at home by anyone with the appropriate tools and a modicum of spannering talent.