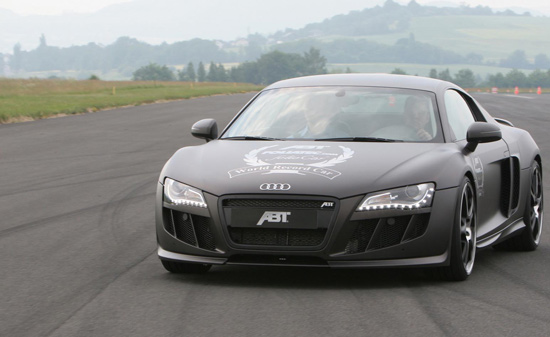 FOLIATEC.com sticks itself to the top of the world!

Whether it is in the 100 meters, on high-speed jets or eating hot-dogs: world records have always had a special fascination. And with regards to full vehicle film fitting, the German car films pioneer FOLIATEC®.com was also faster than all the others.

Together with the professional film fitters folioCar, the company was able to set an absolute world best time on 5th June for fitting a whole vehicle with designer films. With this spectacular feat, FOLIATEC®.com was attempting an entry into the Guinness Book of Records. As a result, the world record fitting was carried out under the supervision of international media representatives within the scope of the IKmedia Experience Day at the TUV premises in Mendig.

An Audi modified by ABT Sportsline was the car used for the fitting, which the crew did not find particularly easy due to its complex chassis shape. Four fitters simultaneously skipped around each other like ballet dancers in a well-rehearsed show, in order to master this Herculean task. The highest quality carbon designer films of FOLIATEC®.com were used. The high-tech plastic material is almost as good as real carbon with regards to quality and durability, and has a deceptively real look. In the fitting not only speed was needed, but also absolute precision. As Oliver Schielein, the general manager of Ikmedia, pressed the stop button at the end, the calibrated digital watch of Swiss Timing showed exactly 2 hours, 25 minutes and 16 seconds. Just prior to this the team was still working hammer and tongs on the fitting, as the last periphery areas were being professionally trimmed with the scalpel. Normally even simple chassis need two full working days to fit. “Although we could have had more people work on the fitting, it was already pretty tight around the vehicle and the extra people would only have got in the way”, explains Marco Kimme of folioCar.

You have to imagine the process as follows: in order to fit the films, the vehicle paintwork has to be thoroughly cleaned. Only then can the film elements, which have already been roughly pre-cut for the individual vehicle parts, be applied. This requires extreme care, so that the plastic film is fitted according to plan. Following this, only small bubbles or creases can be corrected using a squeegee. Afterwards, the overhanging parts are removed by the scalpel.

In spite of the time pressure, every grip of the folioCar crew was secure. At first glance, even a professional cannot differentiate the carbon look of the ABT R8 from high-quality real carbon, although it is much better value for money. The ABT R8, which was fitted in world record time, looks so perfect that it was handed straight over to the future customer without any further work. Another advantage is the fact that the process is reversible, and on request the films can be removed without a trace – showing the original paintwork. FOLIATEC®.com also offers, of course, installation services at all its professional styling team partners and with these special films even at folioCar , the specialists for vehicle film fittings. Even with regards to service the company from Nurnberg might be record-breaking!