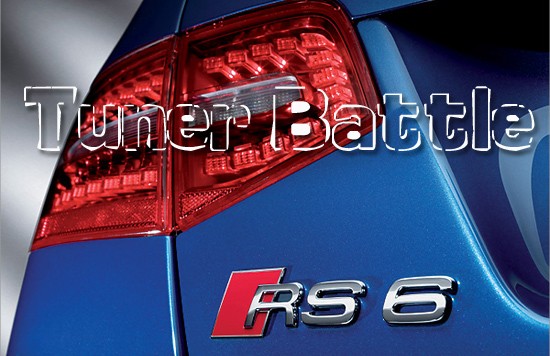 426 kW (580 hp) and 650 Nm (479.42 lb-ft) of torque – with its twin-turbo V10 and quattro permanent all-wheel drive, the Audi RS 6 is a car without equal. It drives like a supercar thanks to its superior performance and thrilling dynamics, yet offers all of the everyday utility of a large business sedan.

The engine of the new Audi RS 6 is a high-tech work of art. The 4,991 cc V10 bundles a number of Audi’s race-winning technologies like FSI direct fuel injection, dry-sump lubrication and two turbochargers. With up to 1.6 bar of boost pressure, these provide smooth, powerful thrust and an incomparable power band: The peak torque of 650 Nm (479.42 lb-ft) is available from 1,500 to 6,250 rpm and thus nearly over the entire rev range. Peak power of 426 kW (580 hp) is generated between 6,250 rpm and the maximum figure of 6,700 rpm.

Like all Audi RS models developed and built by quattro GmbH in cooperation with AUDI AG, the RS 6 is the embodiment of power, elegance, exclusivity and perfection. But this is not enough!

Following the release of the 702hp MTM-tuned Audi RS6 M, some German tuning houses like B&B Automobiltechnik, Kicherer and ABT have created even more awesome tuning package, boosting power up. The Audi RS6 is already a fast car but that really isn’t enough in these days, right? So here are some info on each version:

The ABT RS6 reachs a sweet 320km/h which it would have attained from a standstill position, going past 100km/h in just 3.9 seconds.The regular RS6 makes 4.5 seconds from naught to 100. Serving up this grateful supply of speed to ABT RS6 is the same V10 TFSI lab experiment of some 580 bhp/ 426kW standard. ABT tuned the engine to 700 bhp/ 515kW and 800Nm, from 2400 rpm right up to 6100rpm. The car then becomes more than just an outstanding athlete, but a runner of exceptional skill pulling on all four wheels.

The special race exhaust system with high performance racing catalyst, the new intake and cooling system, and remmaped the ECU are the responsable for the huge increase in power. B&B are also offering an adjustable suspension and new springs that drop the ride height by 25mm. They claimed 0-60 run in a scant 3.6 seconds – that’s 0.9 seconds quicker than the factory produced version. That’s well into supercar territory!!!

On the MTM RS6 R, the MTM engineers boost the engine power electronically to 656 bhp at 6,180 rpm. If need be, the MTM-RS6 R will run upon request at speeds of either 279, 290 or 310 km/h. The outstanding torque of now 785 Nm (production version 650 Nm) allows it to accelerate like lightning from zero to 100 km/h in an impressive 3.9 seconds. An advanced version of the MTM performance kit is in preparation, which, with a massive 702 bhp, even outshines the performance data of most super sports cars. This additional boost in performance is made possible thanks to a stainless steel exhaust system with throttle control downstream from the catalytic converter and a sports air filter. The 702 bhp kit (plus MTM guarantee) is available for € 9950. More details on the MTM RS6 R.

The latest entry is the Kicherer RS6, which fits in with the existing cars almost spec-for-spec, rated at 700hp (522kW) and capable of making the run to 62mph (100km/h) in just 4.3 seconds. Maximum speed of 175mph (280km/h) is limited electronically. A sport exhaust ensures the engine can breathe freely, but also tunes the output to sound like it drives. New springs lower the car by 25mm and give it a slightly firmer ride to improve handling. A new range of aero parts, all made from carbon fiber, include the side mirror shells, a front lip spoiler and a rear diffuser. Wheels are massive 22-inch alloy units wrapped in suitably large rubber. A two-tone paint job blacks out the prominent Audi grille.