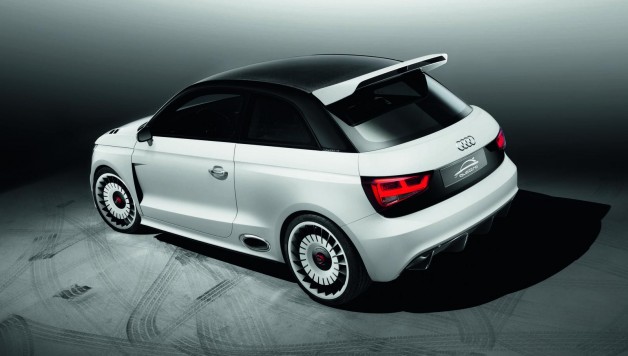 This A1 is a one-off vehicle which Audi will be introducing this week at the Wörthersee Tour 2011. It gives the impression of having just emerged from the shop, freshly painted, on its way to the first rollout on the race track. The Audi A1 clubsport quattro is a one-off vehicle built to the limits of technology for breathtaking dynamics. Audi is presenting the showcar in Reifnitz, in the Austrian state of Kärnten, at the Wörtherseetour 2011. The 30th edition of this major meeting for Audi, Seat, Skoda and VW fans takes place from June 1 – 4, 2011.

The heart of the Audi A1 clubsport quattro is a classic Audi gasoline engine – a five-cylinder unit displacing 2.5 liters with turbocharging and direct fuel injection. Compared with the version used in the Audi TT RS and RS 3 Sportback on which it is based, the output of the TFSI has been increased dramatically to 370 kW (503 hp) and 660 Nm (486.79 lb-ft) of torque. Maximum power is available between 2,500 and 5,300 rpm. 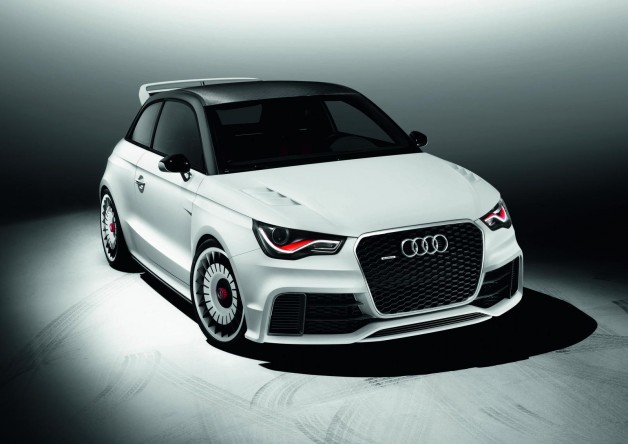 The turbocharger, intercooler, admission tract and the exhaust line have been systematically tuned for high performance. As on the Audi A4 DTM, the tailpipe is located on the left flank, just in front of the rear wheel. 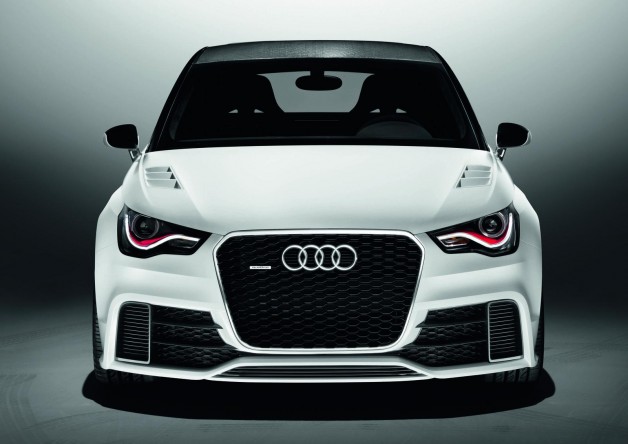 A six-speed manual transmission and quattro permanent all-wheel drive, both taken from the TT RS and enhanced, deliver the power to all four wheels. Top speed is governed at 250 km/h (155.34 mph). 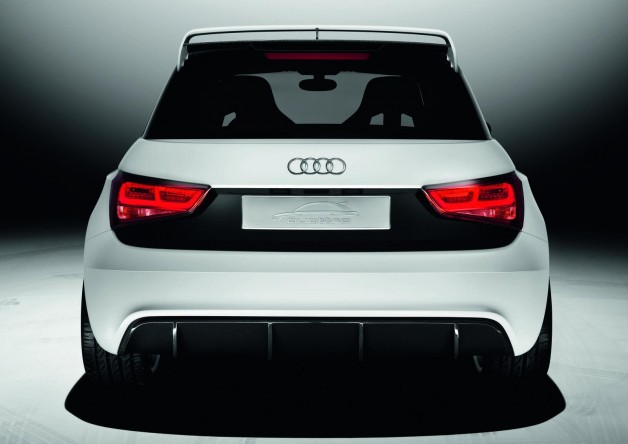 Dynamic and brawny: the exterior
Sporting a very dynamic appearance and an exquisite finish, the showcar makes no secret of its potential. The body has a Glacier White matt paint finish, with accents provided by many add-on parts. The roof arch in high-gloss black supports a roof made of carbon fiber-reinforced polymer (CFRP), and the four rings at the front of the car are solid aluminum.

Large, split air intakes with carbon struts are integrated into the distinctively modified front skirt. The single-frame radiator grille sports a black honeycomb design, and the headlights feature matted clasps with a red “wing.” Heat from the engine compartment is dissipated via two large air outlets in the hood. 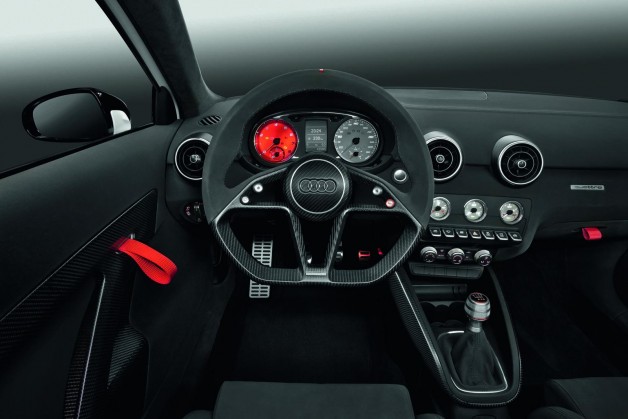 The front fenders, the doors and the rear side panels of the Audi A1 clubsport quattro have been widened by a total of 60 millimeters (2.36 in). They form horizontal “blister” edges, like those found on the Audi Ur-quattro. Air outlets are integrated into the rear ends of the fenders, and the newly designed trim strips on the sills are made of exposed CFRP. Sleek side mirrors are reminiscent of the Audi R8 high-performance sports car.

The rear of the showcar is dominated by the roof spoiler, which features a double wing to provide for sufficient downforce. Darkly toned rear lights and a large, closed diffuser hone the rear view of the A1 clubsport quattro.

Designed as a road vehicle for the race track, the showcar has no rear seat. In its place are a large crossbar to further stiffen the body and storage for racing helmets. A weight-optimized starter battery used in racing is mounted in the rear below the two storage compartments. The strict high-performance concept left no room for an infotainment system, an MMI monitor or even a loudspeaker. The lightweight bucket seats are taken from the Audi R8 GT and feature a chassis made of carbon fiber-reinforced polymer. Red four-point belts secure the driver and passenger.

The interior of the showcar is a study in dark gray. Large areas are covered with exposed, matt-finished CFRP, including the walls in the rear section of the car, the tubes of the air vents and the “stern of the yacht” in the lower section of the center console. The CFRP material used on the open-spoked sport steering wheel is covered with leather. Rocker switches on the center console replace switches on the control stalk and in the door panels. Three additional instruments indicate the oil pressure, boost pressure and electrical system voltage. 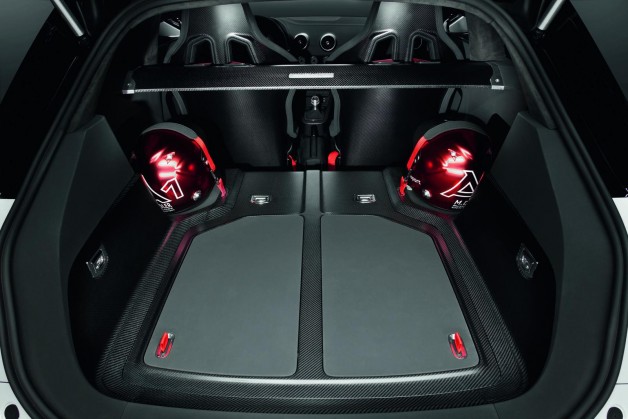 The center console and the seats are covered in fine leather upholstery with tone-on-tone stitching. The selector lever is made of aluminum; the caps of the pedals and the surface of the footrest are made of stainless steel. Red loops replace the handles on the doors, the glove box and the covers of the storage compartments.

Experience the Audi A1 clubsport quattro interactively
The Audi A1 clubsport quattro can also be experienced exclusively in Need for Speed ??World (http://world.needforspeed.com), where it will be available to all players as a free in-game rental car from June 1 – 4. Need for Speed ?World is the Play4Free online PC racing game from EA, in which players take part in races in a giant multiplayer world. 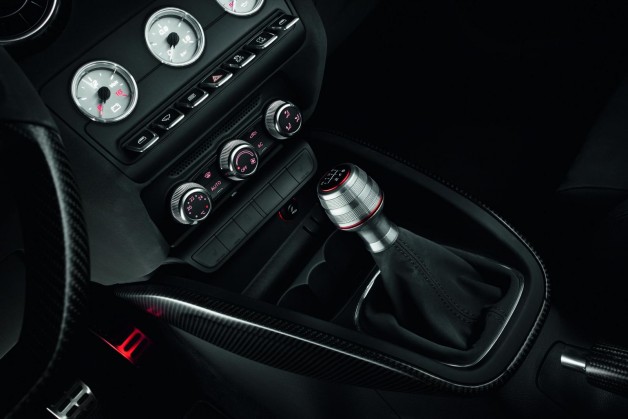 The Audi stand at Wörthersee
Joining the A1 clubsport quattro on the Audi stand at the GTI meet are 17 production vehicles from the current Audi model lineup. Among the vehicles that the brand is presenting to its fans at the Wörthersee is the new Audi Q3. The public can also take a close look at the Audi TT RS in Ibis White and an RS 3 Sportback in Misano Red. Another model is the new Audi A6, which is on display next to an A7 Sportback in Misano Red.

Fans and guests making the trip to the Wörthersee from June 1 – 4 have the opportunity to present their tuned Audi in a worthy manner by driving it past the Audi stage at the company’s Wörthersee stand. 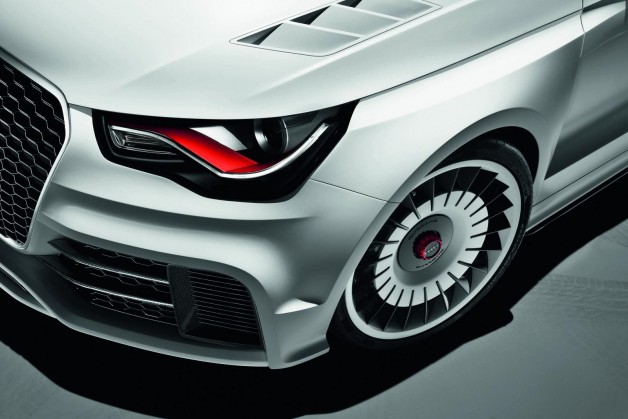 New accessories for production models
Many of the features of the Audi A1 clubsport quattro will soon show up in the accessories program for the A1 family, which Audi is steadily expanding. Adhesive film decals in the contrasting colors Amalfi White, Ice Silver, metallic and Daytona Gray, pearl effect for the vehicles’ shoulders are available immediately.

Another option is the union square lifestyle kit. It comprises exterior decals and design elements for the interior, both with a diamond pattern. Audi is presenting both this and the A1 aerodynamics competition kit at the Wörtherseetour. The customer can order this add-on kit painted either in the body color or in a contrasting color. The same applies to the Audi A1 roof spoiler competition kit.