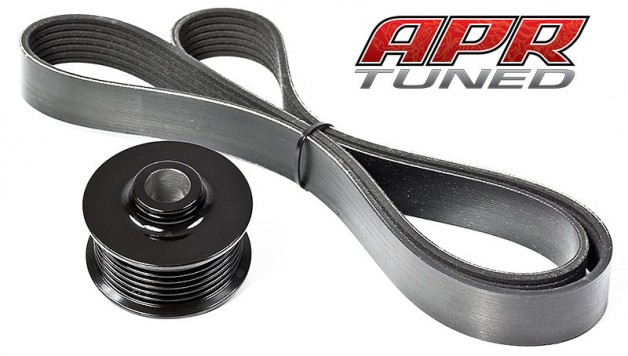 APR is pleased to present the world’s first Supercharger Pulley and corresponding ECU Upgrade for the 3.0 TFSI. Without recalibrating the ECU found in Audi’s latest line of supercharged direct injected vehicles, pulley upgrades offer no advantage, as the supercharger will simply bypass boost pressure. With APR’s ability to expertly recalibrate the 3.0 TFSI Engine Control Unit, we are able to develop new hardware and calibrate the ECU to work properly as if intended by the factory.

Many enthusiasts coming from Audi’s history of turbocharged vehicles expected massive increases in torque, at lower RPMs, simply by adding an ECU Upgrade. Unlike turbochargers, roots style superchargers are positive displacement meaning they provide a fixed amount of air flow based on engine speed. On the 3.0TFSI Audi chose to use a bypass valve that bleeds off boost pressure when requested. Keeping the valve almost completely shut at lower RPMS allows them to make respectable torque, and, opening the valve at higher RPMs allows them to keep horsepower within their marketing goal. Consequently, the APR Stage I ECU upgrade provides a relatively low increase in torque but an exceptional increase in power. For those demanding more torque, The APR Supercharger Pulley Upgrade is the answer. Spinning the supercharger faster increases air flow and effectively doubles the low-end gains of Stage I. The gain in torque is felt immediately, but the results are present from beginning to end adding up to 80ft-lbs and 108 horsepower at all four wheels!

APR has chosen not to cut any corners and as such each APR Supercharger Pulley Upgrade Kit includes a new supercharger belt. Furthermore, all existing APR Stage I ECU Upgrade customers are entitled to a free APR Stage II+ ECU Upgrade required for proper functionality. Finally, every APR Pulley is E-Coated black for an OEM appearance.

Increased Supercharger Speed
The 3.0 TFSI uses an Eaton Twin Vortices Series (TVS) Roots-type Supercharger unit, which features a four-lobe rotor design to safely run at high operating speeds. APR is no stranger to the Eaton TVS1320 Supercharger Unit having spent several years developing a Stage III Supercharger System for the High Revving Audi RS4 and S5 4.2L FSI V8. Through the years, APR’s Engineering Teams placed even greater speed demands on the TVS1320 than offered to the public with a flawless track record.

A balance of power and reliability is always a concern when going beyond what Audi delivers from the factory and APR’s Engineering Teams use accelerated life testing both in house and through professional motorsport racing to ensure years of Performance Without Compromise.

Increased Boost Pressure
Unlike turbochargers, superchargers boost pressure is nearly fixed in relation to engine speed. The factory supercharger unit features an electronically controlled bypass valve which bleeds off boost pressure when mass airflow and load levels increase past the power requirements set from the factory. The APR ECU upgrade prevents boost from bleeding back into the intake system, resulting in higher boost levels. However, boost pressure is still limited by the size and the speed of the supercharger.