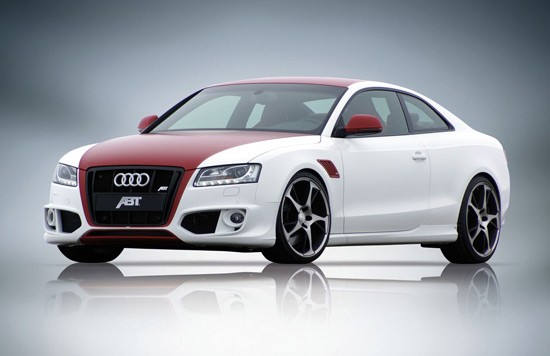 ABT Sportsline has achieved plenty of success with the AS5, which is based on Audi’s A5 – as the coupe has a dynamic and elegant design, is full of technical power and also quick. All this makes it a “real” ABT. Now the company from Kempten has brought out the jewel in this range – the AS5-R.

This vehicle is an ab(t)solute super sports car, nothing more and nothing less. Thanks to ABT POWER R, i.e. the change to the engine management and the insertion of an ABT Compressor, the performance is increased by an impressive 156 HP (115kW) to a powerful 510 HP (375kW). The AS5-R reaches 100km/h in 4.5 seconds and continues on powerfully up to its maximum speed of 292km/h. In spite of this enormous increase in performance, consumption and thereby emissions still remain at the level of the series-produced vehicle. CO2 emissions per HP thereby fall from 0.81 to 0.56g/km.

As is normal with ABT, all the components are perfectly adjusted to the enormous power of a top sports car. The ABT braking system with 380 millimetre disc diameter provides maximum deceleration even in extreme circumstances, and the ABT Coil-over suspension system also helps to bring the potential power onto the road. Motor sport professional Christian Abt has perfectionised the interaction of power with his know-how. The result is a top-class driving machine, which is also enjoyable in everyday use and is pleasant to drive on long journeys. The ABT AS5-R is therefore a maximum of a car – and a statement which shows the high level at which the engineers from Allgaeu work.

Its “suit” fits, of course, like a glove: The front spoiler accentuates the ABT grill and the striking section around the fog lights, inner fender skirt and the gill-shaped air inlets provide contours to the side of the ABT AS5-R. They have also succeeded on the side which most drivers only rarely get to see: The rear with the ABT rear skirt and 4-pipe rear muffler shows that this model athlete on wheels is more than “just” a car. The designers of ABT recommend the 20 inch BR alloys as the perfect accessory. Wheel-tyre combinations with height performance tyres are, of course, also available. Only with these accessories can the fast AS5-R safely unleash its power. And it has lots of that.