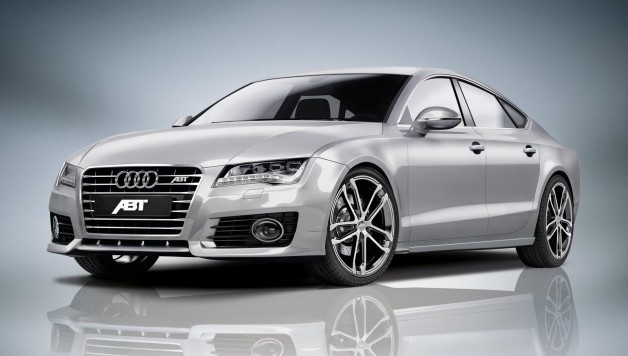 ABT Sportsline Audi A7

Less than month after ABT announced its plans to unveil its tuning take on the new Audi A7 Sportback at the upcoming Geneva Motor Show, the Volkswagen Group specialist has shared the first photos and details on its available packages.

The rather modest cosmetic upgrades include a front apron along with discreet side skirts and a rear apron that makes space for the new rectangular-shaped quad tail pipes. The luxury fastback’s stance can be further enhanced with a lowering kit and a choice of various alloy wheels available in sizes from 19- to 21 inches.

ABT Sportsline also offers a variety of power kits for the A7’s range of engines. Starting with the popular in Europe 3.0-liter V6 TDI, after the German firm’s engineers tweak the turbo diesel unit, power jumps from 245HP to 282HP, while a second stage kit that brings an in-house turbo charger can boost the TDI’s output to 310HP and 610Nm or 450 lb-ft of peak torque. For the gasoline lineup, ABT’s offerings are limited for the time being to the 3.0-liter supercharged V6, which gets a jump from 300-horses to 410HP.