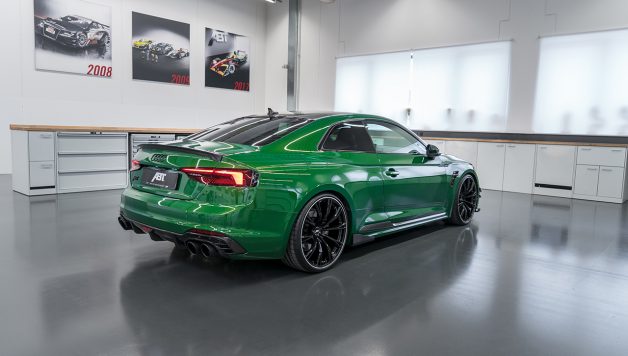 ABT Sportsline has hidden an entire subcompact car in the power boost for the current Audi RS5-R. “On the ABT RS5-R, we get an additional 80 HP and 90 Nm from the 2.9 liter biturbo V6, which has a very similar design to the engine in the first Audi RS4,” CEO Hans-Jürgen Abt proudly explains. The vehicle, which is limited to 50 units, will be presented live for the first time at the Geneva International Motor Show (March 8 to 18, 2018). 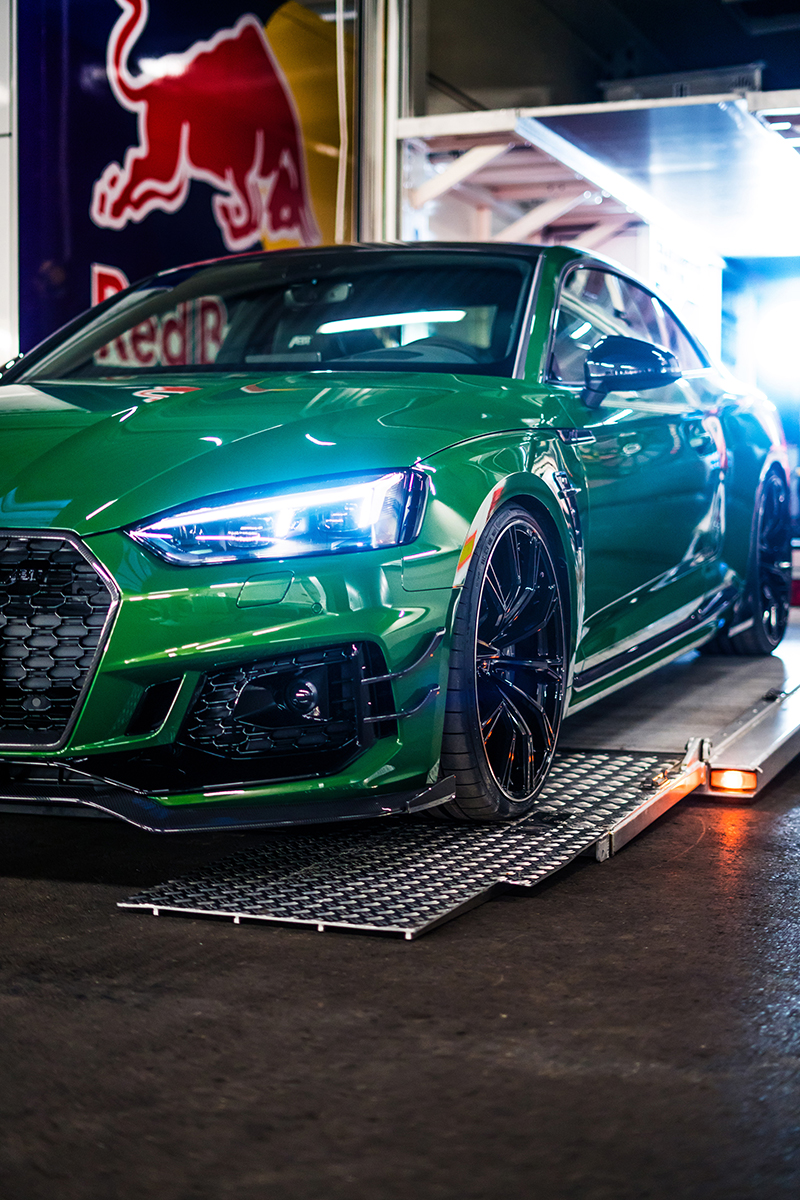 Thanks to ABT Power, the performance increases from 450 HP (331 kW) to 530 HP (390 kW). At the same time, the maximum torque is increased by 15 % from 600 to 690 Nm. This is also reflected in the driving data, with the acceleration from 0 to 100 km/h improved from 3.9 to 3.6 seconds. In the world of supercars, that is a lot. The internationally largest tuner for vehicles from the Volkswagen and Audi Group has more to offer, though: For example the
ABT muffler system which is part of the performance concept and offers the snarling, charismatic V6 sound that is loved by car enthusiasts all over the world. With its four carbon tailpipes with a diameter of 102 mm, it is a feast for the eyes and ears. 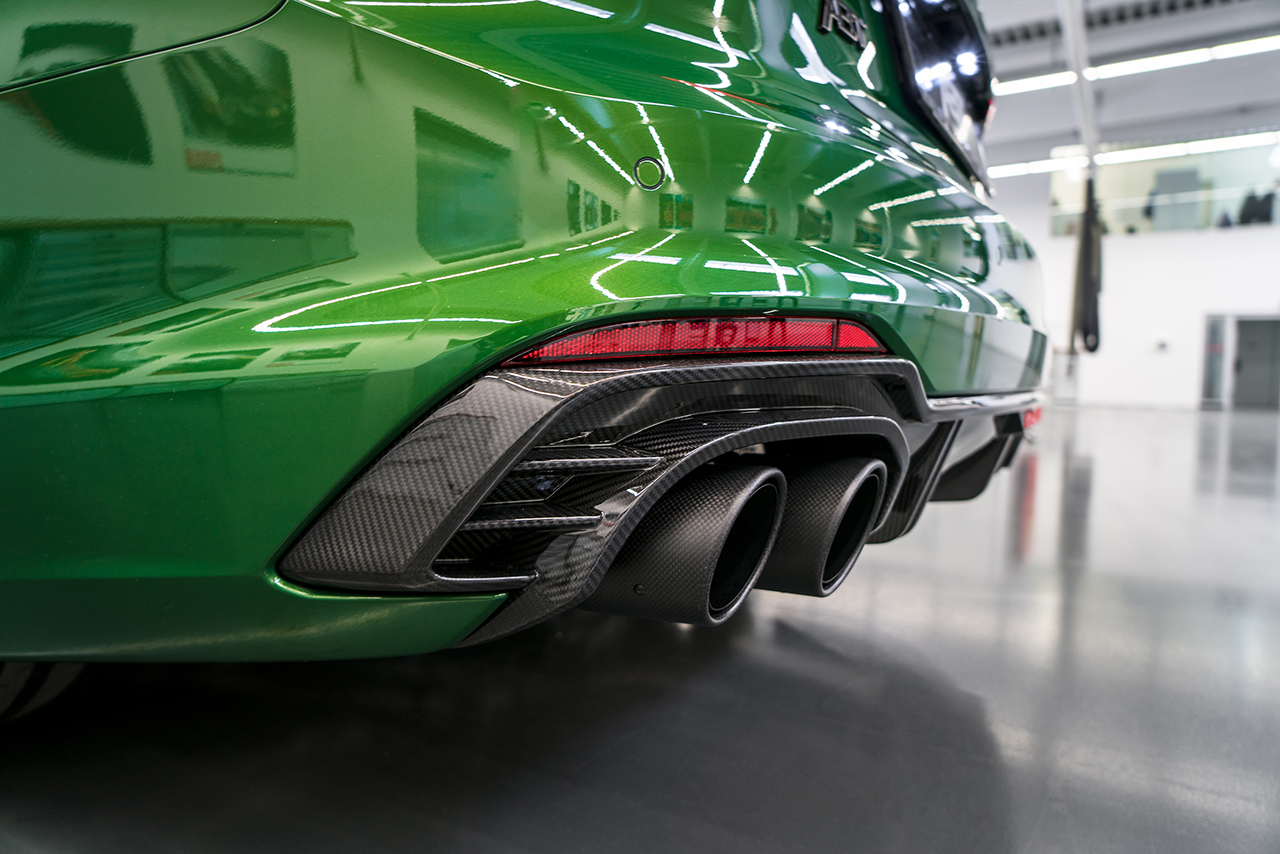 In addition to the longitudinal dynamics, the motorsport specialists also took care of the transverse dynamics: The tuner from Bavaria upgraded the standard suspension with ABT sport stabilizers and ABT height adjustable suspension springs. This leaves customers free to decide on the level of lowering. A coilover suspension system with a special ABT shock absorber setup are also under development, in cooperation with the partner KW automotive. This setup provides a sporty-dynamic driving experience without neglecting the required comfort. Great performance needs a good basis: While the basic RS5 runs off the production line with 19 inch wheels, ABT Sportsline equips the coupé with its
ABT SPORT GR 21 inch rims. The athletically styled wheels have not an ounce of unnecessary weight and feature a strongly concave rim base. The tire format is 275/25 ZR21. 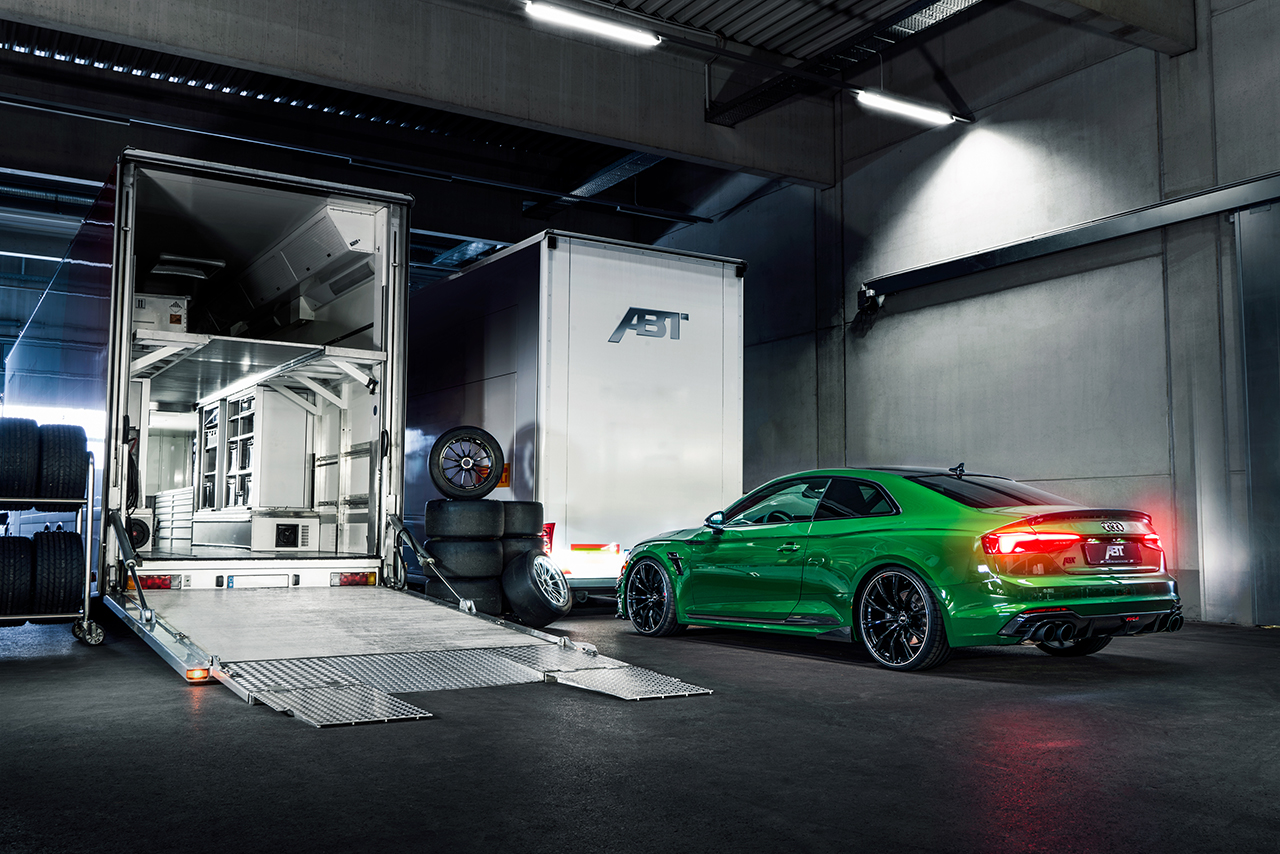 A look at the aerodynamic features in the rear view mirror reveals to other drivers just who is behind them. The new ABT front lip, the ABT front flics and the ABT front grille frame with RS5-R logo will catch anyone’s eye. Overtaking then reveals the aggressive flanks with the optional ABT wheel arch vents, which feature carbon fins. The new add-on parts at the rear are also made from glossy visual carbon – the rear skirt add-on as well as the spoiler. But this is not a view to be enjoyed for long, because the ABT RS5-R will usually disappear again in a fraction of a second. What bystanders will not get to see: The individual interior design, including partial leather seats with RS5-R logo, ABT gear shift cover (carbon), ABT RS5-R “1 of 50” badge and many other extras. This turns the ABT RS5-R into a truly fascinating overall package.