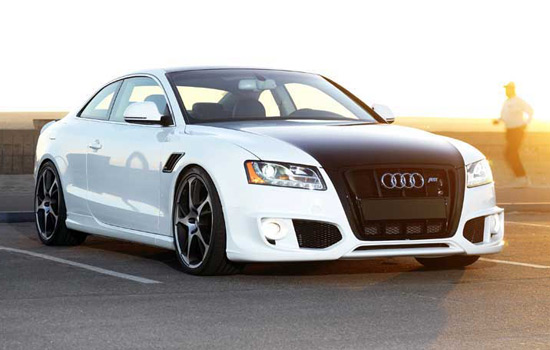 ABT at the Geneva Motor Show

In the car industry, spring traditionally starts with the Geneva Motor Show. The first new innovations are put on show in the second-largest city in Switzerland. The AS5-R from ABT Sportsline is a particularly exciting innovation.

The cool and extravagant Coupe will show its best side in hall 5, as the designers from Allgäu have come up with a breathtaking bodywork kit for the vehicle. The AS5-R is also strong: 510 dynamic horsepower (375 kW) provides considerable power in every situation. For anyone who wants more than the standard 344 HP (253 kW), the eight-cylinder, tuned by ABT, is the perfect choice. Unfortunately the car also shows the disadvantage of a trade fair, as the AS5-R has to stay stationary.

The sports coupe is not, however, alone: the largest tuner of vehicles from the VW group will also be showing highlights from their current program in Geneva. On a surface of 153m2 and a light, elegant stand, the following stars from Kempten are also on view, alongside the AS5-R: the ABT Q5 is a car which cuts a good figure everywhere. The abbreviation “SUV” traditionally stands for “Sportlich Und Vielseitig [sporty and diverse]” at ABT and especially applies to the Q5. The ABT R8 is a real sports car, offering pure dynamics. It is not just the power which is right, but all of the aerodynamics have also been perfectly designed by the motorsport team of ABT for use in extreme conditions.

Nevertheless, the ABT R8 also looks breathtakingly beautiful. Another real eye-catcher is the ABT Scirocco, a landmark amongst compact Coupes. It goes without saying that this car is as sporty as it looks at the trade fair. In order to experience its huge driving enjoyment, you would have to drive out of the hall and around Lake Geneva…