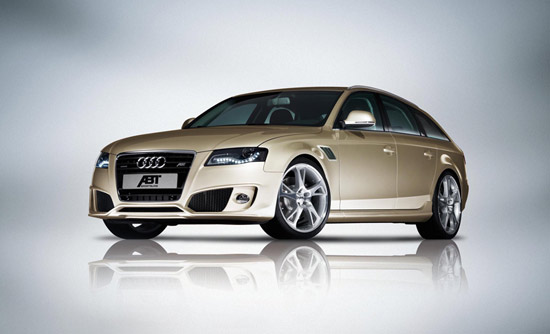 ABT AS4 Avant – fast, attractive and very practical

First of all, a station wagon must be multifunctional and spacious for a family and their luggage. When it comes from ABT Sportsline, the leading tuner of cars by the Volkswagen group, then it is suitable for everyday use and sporty at the same time. In the case of the new ABT AS4 Avant also the outer qualities are impressive as the body kit designed for the multifunctional vehicle by the versatile team based in the Allgäu has become extraordinarily fancy and dynamic.

The front skirt defines the contours of the vehicle’s front and makes the face of the A4 appear brawnier. The transitions to the fender insets and the side skirts are very elegant and sporty. A view on the side proofs self-confidently that the ABT AS4 Avant is a real power station. The icing on the cake of this overall successful car is its rear section radiating dominance with a roof spoiler, rear skirt and, typical for ABT, a 4-pipe exhaust system. ABT recommends the BR wheel, which matches perfectly the design of the station wagon made in Kempten and, even when standing still, signals that the AS4 Avant offers pure driving pleasure.

But the ABT AS4 Avant does not only look sporty, it is in fact sporty. This is ensured by suspensions which are perfectly tuned to the vehicle by Christian Abt. Especially recommendable is the ABT adjustable sports suspension that can be adjusted to the individual manner of driving. But also ABT suspension springs improve the road holding of the Avant significantly. Equipped that way, the practical sports car is fit for an Allgäu power increase. Several versions are available for the different engines – and all with the ABT guarantee.

Two examples: The TFSI with 1.8 liter cubic capacity featuring ABT POWER offers respectable 200hp (147kW) instead of the serial 160hp (118kW). With ABT POWER-S even 240hp (177kW) are provided. ABT POWER gives the 3.0 TDI engine dynamic 282hp (207kW) instead of formerly 240hp (177kW). ABT POWER S upgrades the huge Diesel to 310hp (228kW). The maximum torque then is 610Nm instead of the serial 500Nm. Thanks to ABT brakes, the sporty ABT AS4 Avant always offers the driver the certainty that the car can be decelerated exactly and in every situation. Precision down to the last detail – this is what the name ABT guarantees, also for the new station wagon version of the A4.

Current available power upgrades for the A4 Avant