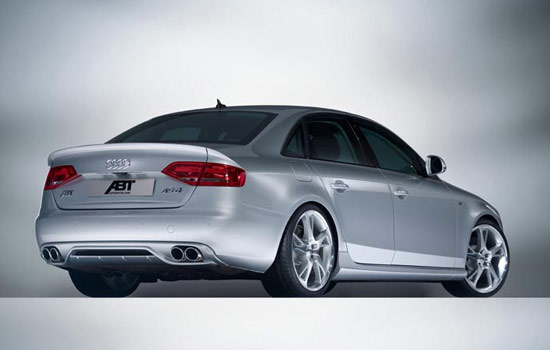 Abt AS4 – a strong character

By concept, the new Audi A4 is already a dynamic, exciting and powerful car – and therefore this new sedan car made in Ingolstadt offers a perfect starting point for the engineers and designers with Abt Sportsline. With the AS4, the world’s leading tuner of cars from the Volkswagen group succeeded in creating a car which is in every respect harmonic and sporty, as well as elegant: the front skirt, which emphasizes the distinctive headlight area, makes the AS4 look very dynamic and self-confident. Side skirts and fender inlets meet the sporty design and harmonize perfectly with the rear section of the car; the 4-pipe rear muffler, the rear skirt inlet and the rear spoiler form a perfect unit.

The rear spoiler is not only a sleek add-on part; it also provides an even better contact between car and asphalt. That is indeed necessary, as the Abt engineers have substantially increased the power of the state-of-the-art engines of the A4: equipped with Abt Power, the new 1.8 TFSI now delivers 200hp (147kW) instead of the serial 160hp (118kW). Equipped with Abt Power S, the engine even delivers 240hp (177kW) – thanks to the turbocharger developed by Abt replacing the serial charger. Also the diesel engines are significantly more powerful. Equipped with Abt Power, the 2.0 turbo diesel delivers 170hp (125kW); with Abt Power S, the two-liter self-igniting engine has 200hp (147kW). Thanks to Abt Power, the 2.7 TDI delivers reliable 230hp (162 kW) instead of 190hp (140kW). The flagship diesel 3.0 TDI disposes of either 270hp/199kW (Abt Power) or of 300hp/221kW (Abt Power S) instead of 240hp (177kW). The Abt Power S version has an enormous torque of 600Nm.

The Abt suspension springs, and particularly the Abt adjustable sport suspension have been perfectly tuned to the character of the sporty sedan car by racing-pro Christian Abt. In order to adjust the brake force to the power potential of the Abt AS4, the Allgäu-based tuners offer either the Abt brake system (diameter: 345mm) or the Abt sport brake system (diameter: 380mm).

Elegant wheels from the Abt wheel program are ideal to complement the dynamic, exciting and powerful car. No matter whether sleek AR wheels or extravagant BR wheels – both suit the AS4 perfectly. AR and BR are both available in size 18, 19 or 20 inch, of course also together with suitable tires.

Engines currently available for the Abt AS4:

One Response to Abt AS4 – a strong character