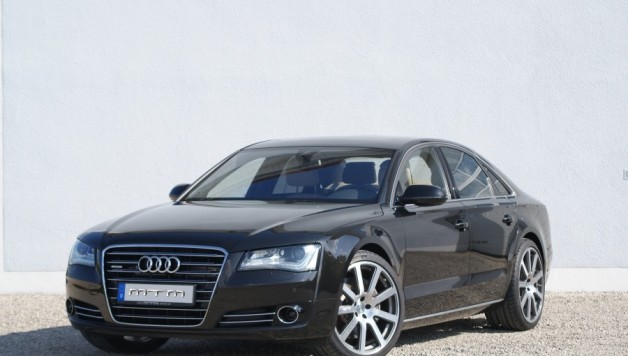 Diesel engines, formerly the preferred engines for large and small vehicles, have long since been at home under the bonnet of luxury limousines and trendy SUVs. Powered by voluminous self-ignition engines, these cars glide smoothly along the spacious boulevards and park in front of opera houses, art galleries and boutiques. Often, the owner is sitting in the back, with a chauffeur at the wheel. And he has every right to be happy. As a rule, he has at his disposal torque that produces irresistible power delivery even at an engine speed significantly lower than 2,000 rpm, thus confirming the theory that you can get “a lot of power out of a low engine speed”

And then there is MTM, the maker of exclusively equipped cars – mostly Audis and Volkswagen. Managed by Roland Mayer, owner of the company, MTM engineers have got to work on the 4.2 litre TDI that is deployed in the A8, as well as in the Q7 and Volkswagen Touareg. By no means weak with 350 HP, but with enough potential for much more power at a low engine speed as well at the upper end of the rev range.

Tried and tested methods are used to increase power: standard engine management is out, MTM systems are in. When a V-Cantronic is deployed in the A8, it is true that performance remains the same at 350 HP, but the high speed of the saloon is no longer abruptly suppressed at 250 kph. The limit doesn’t kick in until 282 kph. This version only comes with the A8. It takes a good two hours of skilled workmanship and is available at less than € 1,400.

Those who want to compete in the Champions League with their V8 TDI can get themselves into the top division of the engine speed league for just under € 1,800. As well as 410 HP, the MTM high-tech laboratory gives you 930 Nm of torque – for a hold that could rip up paving stones.

No less powerful, but around €100 cheaper, is the MTM version that uses an M-Cantronic. Those who are looking for more than the top class power output of 930 Nm, however, are catered for by MTM with a combination of the M-Cantronic and V-Cantronic, which slow down the engine speed limitation at 250 kph. This additional “powerhouse doping” costs less than €2,700 and is only available for the A8.

For all versions, a beauty and safety concept in line with the company style is available: wheel rims, brakes, exhaust systems and chassis components which coupled together with the A8, Q7 or the Touareg make for an imposing ensemble. Then you are ahead of the field on the road but not the first at the fuel station.